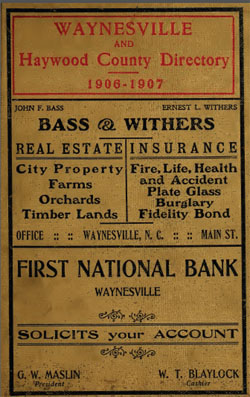 Over 200 city directories from 34 different cities and towns are now available to search and browse on DigitalNC: http://digitalnc.org/collections/north-carolina-city-directories.

Most of the directories in the digital collection are from the North Carolina Collection, with a few contributed by the Durham County Library and the Forsyth County Public Library. We are planning to add more directories over the next year.

City directories are fantastic resources for studying family and community history, with a surprisingly rich amount of information. Not only do they include names and addresses, most contain information about each person’s occupation, place of employment, and spouse. In many directories published in the early twentieth century, the race of the resident is also noted.

“In 1937, Postmaster General James Farley dedicated a new post office in Arlington, Virginia, and managed to place Sir Walter Raleigh in the wrong place at the wrong time and also to locate Roanoke Island in Virginia rather than North Carolina. These lapses received front-page coverage….

“While gently chiding Farley, a New York Times editorial explained that his errors were entirely understandable. ‘As we remember our school books,’ it observed, ‘everything from the vicinity of Florida up to Canada was ‘Virginia’ in the vague and spacious time of Elizabeth. Indeed, if Mr. Farley will look at a map of Virginia in those days, it will remind him tremendously of a map of the Roosevelt states last November.’ ”

— From “Mystic Chords of Memory: The Transformation of Tradition in American Culture” by Michael Kammen (1991)