“Be just and fear not.” With these words, David Ward Simmons, UNC class of 1861, signed a classmate’s autograph book. Three years later, Simmons died at the age of 23 of wounds sustained on the battlefield near Petersburg, Virginia.

Our August Artifacts of the Month, donated by a relative of Simmons, include an ambrotype of Simmons posing with a musket and two of his personal belongings: a Dialectic Society medal and a small pin. 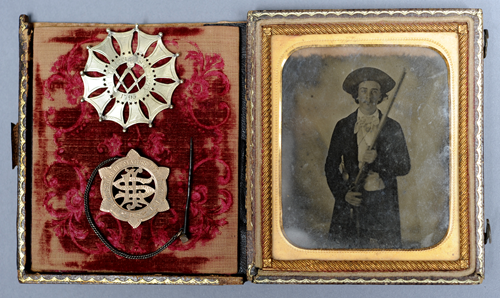 Simmons was born on March 31, 1841 in Onslow County. As a young man, he entered UNC-Chapel Hill, where he studied law and joined the Dialectic Society. The Di Society is the obvious origin of the medal, the inscription of which reads “DIALECTIC SOCIETY.” 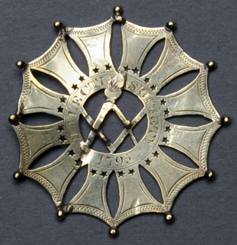 What’s less clear is the meaning of the pin. (If you can offer any insights, please share them in the comments.) 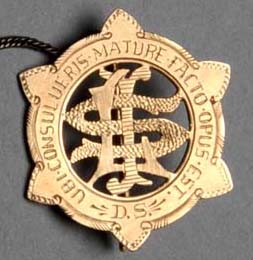 Measuring just about an inch in diameter, the pin bears the inscription, “UBI CONSULUERIS MATURE FACTO OPUS EST.” (Translation: When you have made your plans, you must act quickly.) And, at the bottom, a “D.S.” (David Simmons? Dialectic Society?) Is the insignia in the middle (L.I.S.?) from a fraternity?

Is there a clue on his autograph page? 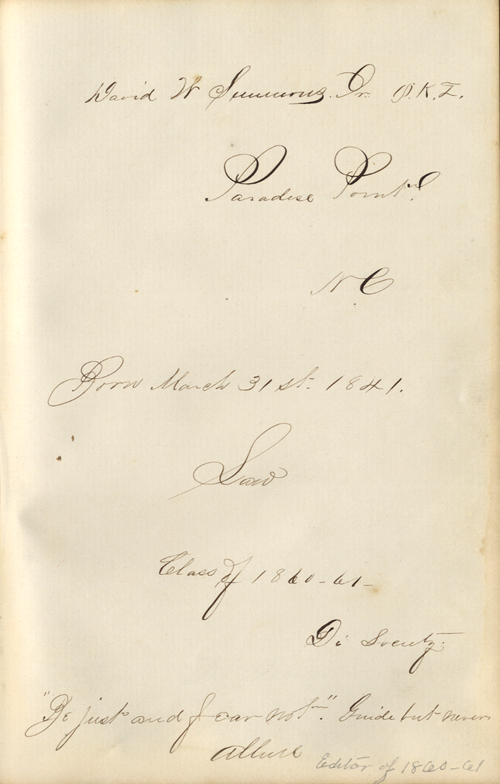 After graduating, Simmons served as a Lieutenant in Company B, 41st N.C. Regiment. The Siege of Petersburg began June 9, 1864, and lasted nine months. Simmons was wounded June 21, less than two weeks into the siege. He died four days later, on June 25, 1864.

It’s a rare and welcome occurrence that we receive artifacts related to a 19th-century UNC student; rarer still that they come to us with a beautiful photograph of the student himself. When viewed together, these three artifacts deliver a unique glimpse into a life that ended too soon. We’re honored to have them in the collection.

Death noted: Karl Fleming, 84, one of the greats of civil rights reporting.

Fleming was born in Newport News, Va., but grew up in the Methodist Orphanage in Raleigh, attended Appalachian State and worked on dailies in Wilson, Durham and Asheville before landing his career-defining job at Newsweek.

“To be an alien reporter in the remote towns of Mississippi, Alabama and Louisiana where the young black ‘outside agitators’ were causing trouble was to be almost totally isolated behind enemy lines, linked to the outside world only by a long distance line that I always assumed was tapped. My nerves were constantly on edge. I drank a lot of Maalox and a lot more bourbon. That I had grown up in segregated North Carolina and had a redneck crewcut and deep Southern accent made it even worse. Not only was I a troublemaker, I was a traitor as well… perceived as betraying ‘our Southern way of life’….”

However perilous Fleming’s years on the Southern “race beat” — and he exaggerates not an iota — it was not until, as chief of Newsweek’s Los Angeles bureau, that his life began collapsing amidst a confluence of depression, drugs and alcohol. A beating after a 1965 Black Power rally in Watts left him with a fractured skull, and in 1973 he was scammed out of $30,000 by a phony “D. B. Cooper.”

But in his prime he surely deserved mention alongside his frequent roommate on the road, Claude Sitton.