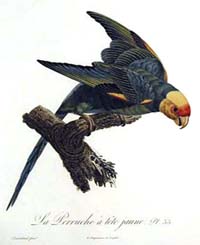 The Carolina Paraket and Relatives: A Look at Some Natural, Un-natural, and Cultural Histories

How much do we know about the Carolina Parakeet? Very little, as it turns out. John Gerwin and Brian O’Shea of the NC Museum of Natural Sciences will describe what is known and not known about this extinct bird, and talk about some of the early explorers who had personal experiences with the Parakeet. They will also share some natural history highlights of related species and conservation stories of select, endangered parrots in the U.S. and abroad.

“For some of Sherman’s men, like Daniel Oakey, scenes of burning forests verged on the sublime. Describing the army’s advance into ‘the wild regions of North Carolina,’ he wrote,

” ‘The resin pits were on fire, and great columns of black smoke rose high into the air, spreading and mingling together in gray clouds, and suggesting the roof and pillars of a vast temple. All traces of habitation were left behind, as we marched into the grand forest with its beautiful carpet of pine-needles….

” ‘As night came on, we found that the resinous sap in the cavities cut in the trees to receive it had been lighted by “bummers” in our advance. The effect of these peculiar watch-fires on every side, several feet above the ground, with flames licking their way up the tall trunks, was…  striking and beautiful.’

“Despite the scene’s allure, however, Oakey concluded that the ‘wanton’ destruction was ‘sad to see’….”