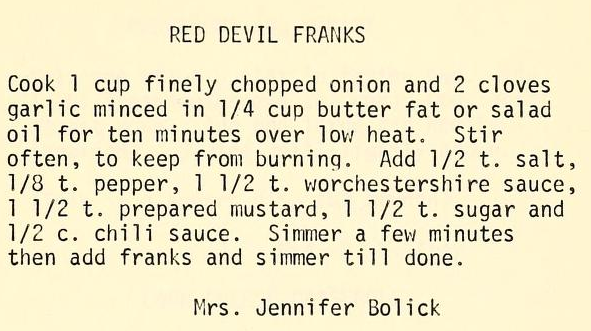 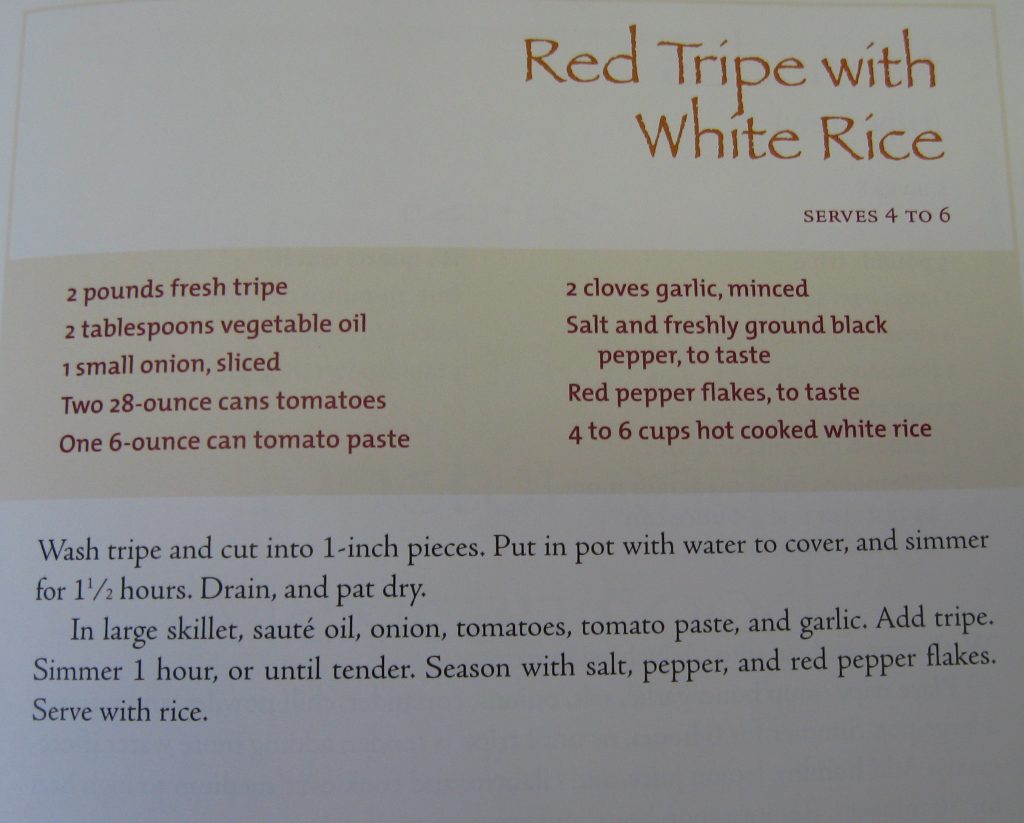 Red Tripe with White Rice from Hallelujah! the welcome table : a lifetime of memories with recipes.

Blue Cheese Dogs from A Taste of the old and the new.

The 1903 meeting of onetime foes on the Gettysburg battlefield sparked interest among North Carolina Miscellany readers. So today’s post provides a few more details on the first encounter between Lt. Colonel John R. Lane of the 26th North Carolina Regiment and Sgt. Charles H. McConnell of the 24th Michigan Regiment of the Iron Brigade (note the previous post incorrectly described McConnell as a colonel).

Lane, a native of Chatham County, and McConnell, a Chicago native, faced each other in battle during the first day of fighting at Gettysburg. The 26th North Carolina was charging the Union lines in McPherson’s Woods. They were met with strong resistance by the 24th Michigan and suffered numerous casualties. The flag of the 26th had fallen 11 times as successive color guards were killed or wounded. As Col. Henry K. Burgwyn rescued the colors and prepared to hand them off to a private, he was shot in his left side and fell. Shortly after taking the flag, the private, too, was shot. Lane stepped up to serve as the 14th standard bearer. As recounted in the 26th’s regimental history, Lane shouted at the top of his voice, “Twenty-sixth follow me.”

The men answer with a yell and press forward. Several lines of the enemy have given away, but a most formidable line yet remains, which seems determined to hold its position. Volleys of musketry are fast thinning out those left and only a skeleton line now remains. To add to the horrors of the scene, the battle smoke has settled down over the combatants making it almost as dark as night. With a cheer the men obey the command to advance, and rush on and upward to the summit of the hill, when the last line of the enemy gives way and sullenly retires from the field through the village of Gettysburg to the heights beyond the cemetery.

Just as the last shots are firing, a sergeant in the Twenty-Fourth Michigan Regiment (now the President of the Iron Brigade Veteran Association, Mr. Charles H. McConnell, of Chicago), attracted by the commanding figure of Colonel Lane carrying the colors, lingers to take a farewell shot, and resting his musket on a tree, he waits his opportunity. When about thirty steps distant, as Colonel Lane turns to see if his regiment is following him, a ball fired by this brave and resolute adversary, strikes him in the back of the neck just below the brain, which crashes through his jaw and mouth, and for the fourteenth and last time the colors are down. The red field was won, but at what cost to the victor as well as the vanquished.

The cost of the battle to Lane may have been his ability to clearly communicate. Lane was among the speakers at the 1903 Gettysburg commemoration, the same event during which he was photographed with McConnell. His talk included a recitation of the battle, drawn, he said, from the regimental history. But before detailing his actions and those of his comrades in arms, Lane offered an apology.

I must warn you that you must not expect a highly wrought oration from me. I was once a soldier, never a speaker. Besides, our good friends, the enemy, took care on this field of Gettysburg that I should never become an orator, for a Yankee bullet ruined my throat and took away a part of my tongue and deprived me of my teeth.

After fighting ceased at Gettysburg, Lane was among the wounded placed on a southbound wagon train. The caravan had not ventured far when it was attacked by Union cavalry. According to the regimental history, Lane “at once got out of the wagon, mounted his horse and made his escape, though he was at the time unable to speak or to receive nourishment in the natural way. He was unable to take any nourishment for nine days, owing to the swollen and inflamed condition of his throat and mouth, and it was thought impossible for him ever to get well.”

But Lane did get well. And he continued to fight with the 26th North Carolina, sustaining three more severe wounds before finally being hospitalized in Greensboro. He was there when his unit surrendered at Appomattox on April 9, 1865.