“[From its first appearance in 1868] the outrage story, a matter-of-fact newspaper account of Ku Klux Klan violence in the South, remained the most common means by which Northern readers engaged with the Klan….

“A New York Tribune correspondent reporting from Raleigh, North Carolina…had arrived ‘prepared to find that the stories which have reached the North were greatly exaggerated; but the reality seems to be that the one-tenth part has not been told….Take your idea of Ku-Klux outrages. Whip your man or woman half to death, string up your victim to a tree and let him hang for days, bring to mind the worst case of rape you have ever heard of. [Then] multiply these instances by a hundred and throw in every form of torture and cruelty which ingenuity can suggest, with a few thousand lesser whippings which separately count for little, and you will get some idea of the state of affairs in North Carolina.’

“The constant, predictable appearance of [such] stories spoke to the essential deviance of Southern white society. Klan attacks became the raw materials out of which Northerners fashioned an image of a backward, bloody and dangerous South.”

Edward R. Murrow, a native of the Polecat Creek community in Guilford County, died 50 years ago today. As the New York Times observed in his obituary, Murrow’s  “independence and incisive reporting brought heightened journalistic stature to radio and television.”

Today he seems to be remembered most often by critics of his successors in the news media. In 2005 the Washington Post’s Mark Leibovich did the ultimate takedown on “Edward R. Murrow must be rolling over in his grave.”

If you still can’t resist the pull of this hoary rhetorical device, at least don’t refer to the subject as “Edward R. Morrow.”

“The words very and must didn’t exist in the rural North Carolina dialect I spoke. All my relatives and neighbors used mighty where Yankees would use very.

“I recall the first time I heard must coming from the mouth of a Southerner. Our high school was having career day and had invited a pianist from Fayetteville who had tried his luck in New York. He said, ‘I must go now; I have another session….’  I was so struck by the incident, that I remember it to this day, a half century later. Now very and must are commonplace….”

I wasn’t shocked to see Bloomberg Best (and Worst) list Asheville as having the highest concentration of Scotch-Irish ancestry among U.S. metro areas.

But I’d never have guessed the national leader in concentration of Palestinian ancestry: Greenville.

“A few Beanie collectors remain, and I went to Fayetteville, North Carolina, to meet the most fanatical of them… a 64-year-old man who owned a collection of 16,000 Ty products and lived with his 32-year-old daughter, who made a full-time job of cataloging her father’s Beanie Babies….

“Their house would be roomy inside if it weren’t for all the Beanie Babies — Leon [Schlossberg] has to remove hundreds of Beanies from the bed  each night before sleeping in it….

“Leon assures me that Ty products are not the driving force behind his life. The driving force, he explains, is the Ty Museum he will build….A trailer stocked with rare Beanie Babies will travel to schools to raise awareness for the Ty Museum, whose location will be determined by tax credits and taxpayer matching funds….”

— From “The Great Beanie Baby Bubble: Mass Delusion and the Dark Side of Cute” by Zac Bissonnette (2015)

Our April Artifact of the Month is a poster, donated by Lew Powell, advertising cruises from Morehead City on the M.S. Stockholm. 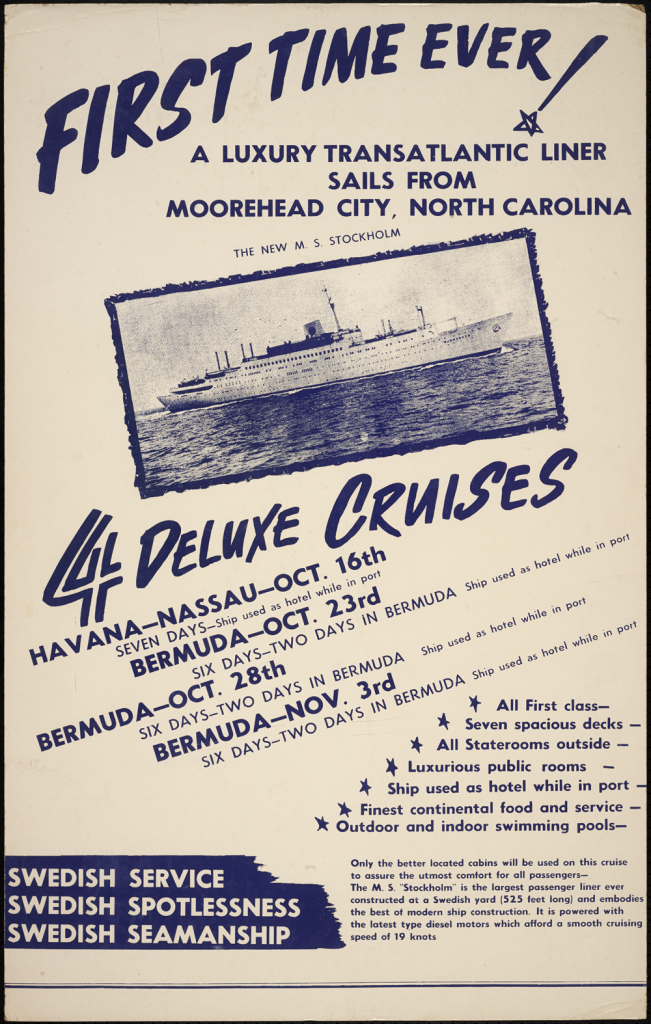 When this travel poster was created, the M. S. Stockholm was a slim young 12,000-ton ocean liner with a yacht-like profile. The ship, which was owned by the Swedish America Line, began sailing in 1948. The Stockholm provided regular service between Scandinavian ports and New York City during an era when crossing the Atlantic by ship was gaining in popularity — despite the growing availability of transatlantic air service.

Partly in response to the vessel’s lively behavior in the rougher northern seas, the Swedish America Line scheduled the Stockholm for a series of four cruises originating at Morehead City, North Carolina, with Havana, Nassau, and Bermuda as destinations in the autumn of 1953. As local newspapers reported, North Carolinians took advantage of this opportunity, with the first cruise being occupied almost entirely by about 400 members of the North Carolina Academy of General Practice physicians and their families. The departure from Morehead City was postponed by one day while Hurricane Hazel roared ashore. The October 23rd cruise to Bermuda included a convention of North Carolina livestock Feed Dealers.

The Stockholm has subsequently led a long and eventful life.

On the foggy night of July 25, 1956, the eastbound Stockholm collided with the much larger luxury liner and pride of the Italian Line fleet, the Andrea Doria, near the Nantucket lightship. A fourteen-year-old girl was catapulted from her berth in the Andrea Doria onto the deck of the Stockholm. The girl survived. But the Andrea Doria sank eleven hours later. Between the two ships, fifty-one lives were lost.

The bow of the Stockholm was repaired, and the ship was placed back into service. Since then, the vessel has experienced a considerable series of changes of ownership and name.

1960
Sold to East German government. Renamed Völkerfreundschaft. Operated as an ocean liner for fifteen years.
1985
Transferred to a Panamanian company. Named shortened to Volker. Laid up in Southampton, United Kingdom, in 1986. Then renamed Fridtjof Nansen. Served as a barracks ship for asylum seekers in Oslo, Norway.
1989
Sold to an Italian company, which rebuilt it as a modern cruise ship from the waterline up. Renamed Italia 1, then Italia Prima, then Valtur Prima while providing service to Cuba. Laid up in Cuba in 2001.
2002
Purchased by Festival Cruise Line. Renamed Caribe. Sailed on the Cuba route.
2005
Sailed for Classic International Cruises. Renamed Athena. Attacked by pirates in the Gulf of Aden on December 3, 2008, but the ship’s crew and a U.S. Navy patrol aircraft drove the pirates off.

2013
Bought by a Portuguese company, Portuscale Cruises. Renamed Azores. Conducted charter cruises.
2015
Scheduled for long-term service by the Cruise and Maritime Voyages company. The ship once known as the Stockholm will be 67 years old in 2015.

“[James] Leloudis added that Powell’s collection of writings has been so valuable toward historical literature that North Carolina tends to be ‘over-represented,’ in part due to Powell’s work.”

Dr. Leloudis’s comment about the distorting effect of Bill Powell’s prodigious output piqued my curiosity. Is such “overrepresentation” a bad thing? Certainly, other states thought so when they protested the manuscript forays of J. G. de Roulhac Hamilton (and dubbed him “Ransack”).

“It’s a good thing,” Dr. Leloudis clarifies. “My point — which the reporter didn’t quite get — was that the North Carolina Collection is in a class by itself, and that the depth and comprehensive character of the holdings make it a particularly fruitful site for research. No wonder, then, that a disproportionate share of the historical scholarship on the South has a North Carolina focus.”

On this day in 1955: I. Beverly Lake Sr., assistant attorney general of North Carolina, arguing before the U.S. Supreme Court that the state should be given no deadline to desegregate its schools:

“Race consciousness is not race prejudice. It is not race hatred. It is not intolerance. It is a deeply ingrained awareness of a birthright held in trust for posterity. . . .

“The majority of North Carolinians have been taught from infancy, and they understand, how it came about that Israel became a great nation, while Edom faded into oblivion, and they agree with the great Disraeli, who said: ‘No man will treat with indifference the principle of race, for it is the key to history.’ “

“[John Archibald] Wheeler struggled to mend a rift in physics between general relativity and quantum mechanics—a rift called time. One day in 1965, while waiting out a layover, Wheeler asked colleague Bryce DeWitt [at UNC Chapel Hill] to keep him company for a few hours. In the [Raleigh-Durham International] terminal, Wheeler and DeWitt wrote down an equation for a wavefunction, which Wheeler called the Einstein-Schrödinger equation, and which everyone else later called the Wheeler-DeWitt equation. (DeWitt eventually called it “that damned equation”)….

“His work on the physics of black holes had led him to suspect that time, deep down, does not exist. Now, at the airport, that damned equation left Wheeler with a nagging hunch that time couldn’t be a fundamental ingredient of reality. It had to be, as Einstein said, a stubbornly persistent illusion….

“In recent years, Stephen Hawking… has been developing an approach known as top-down cosmology…. By applying the laws of quantum mechanics to the universe as a whole, Hawking carries the torch that Wheeler lit that day back at the North Carolina airport….”

— From “Haunted by His Brother, He Revolutionized Physics” by Amanda Gefter at Nautilus magazine (Jan. 16, 2014)

“Thomas Kunkel’s biography adds some telling details to what [Joseph] Mitchell’s readers already know about his childhood as the eldest son of a prosperous cotton and tobacco grower in North Carolina. Perhaps the most striking of these is Mitchell’s trouble with arithmetic—he couldn’t add, subtract, or multiply to save his soul—to which handicap we may owe the fact that he became a writer rather than a farmer. As Mitchell recalled late in life:

You know you have to be extremely good at arithmetic. You have to be able to figure, as my father said, to deal with cotton futures, and to buy cotton. You’re in competition with a group of men who will cut your throat at any moment, if they can see the value of a bale of cotton closer than you. I couldn’t do it, so I had to leave.

“Mitchell studied at the University of North Carolina [1925-29] without graduating and came to New York in 1929, at the age of twenty-one….”

But the reddest meat in Kunkel’s  “Man in Profile: Joseph Mitchell of The New Yorker” is the revelation of how much fiction Mitchell infused into such classic works as “Joe Gould’s Secret” and “Up in the Old Hotel.” (“Does It Matter?” some ask.)