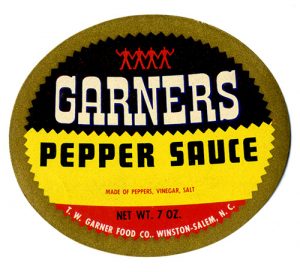 Though best known for Texas Pete hot sauce, concocted in 1929, the TW Garner Food Co. has produced a wide and oft-tweaked range of condiments. Among recent additions: Salsas and wing sauces.

Its minimalist pepper sauce has remained a staple, however. “When whole, green Tabasco peppers are soaked in vinegar and salt,” Garner promises, “the result is a tangy, spicy topping with flavor that’ll make you say ‘Heavens to Betsy!’ ”

Where would collards be without it?

Footnote: The four figures at the top of the label represent the company founders — Sam Garner and sons Thad, Ralph and Harold.

“I wouldn’t want to call it a conspiracy, but there seems to be a ‘Concerted Effort’ to make me drop Miss Buxley….I’m not sure I should cave in to such a minority and deprive my mass readership of its enjoyment….”

Miss Buxley survived, although (eventually) in toned-down circumstances. As noted in the Washington Post’s obit: “In 1997, responding to criticism from feminists who objected to Halftrack’s longtime ogling of Miss Buxley, Mr. Walker had the elderly general attend sensitivity training. Gone were gags such as the one in which Halftrack approves of the three-martini lunch that enables him to see double Miss Buxleys.”

“To the spectators at the streak Wednesday night:

Thanks to the efforts of Carolina undergraduate Elizabeth Trefney, UNC is privileged to be hosting an exhibit featuring a panel from the historic AIDS Memorial Quilt. The panel will be on display in the Carolina Student Union Building through January 31. The exhibit serves as a powerful reminder of the devastating global impact of HIV/AIDS, a point also emphasized by a collection of photographs in the North Carolina Collection’s Photographic Archives.

Trefney’s interest in coordinating the Student Union exhibit is both universal and personal: She wanted to remind the UNC community of those whose lives have been affected by HIV/AIDS, and in particular to honor her late uncle, Jeremy Trefney (1957-1988), who passed away due to complications from HIV and is memorialized on a panel of the AIDS Memorial Quilt. The quilt panel’s presence also celebrates the role of UNC’s School of Medicine and other medical research facilities in making groundbreaking advances in HIV/AIDS treatment.

Coincidentally, the North Carolina Collection Photographic Archives in the Wilson Special Collections Library holds a collection of photographs that contains images of the quilt on the National Mall in Washington, DC on the Mall, starting with its origins in 1987 and depicting its subsequent periodic display through the late 1990s.

The photos were made by Jerome Friar, a North Carolina native and photographer who worked in DC in the 1980s and 90s. Friar worked for a stock photography group called Impact Visuals, which provided timely and relevant images to social justice organizations for use in their publications. (Our younger readers may be surprised to learn that such a service was necessary in pre-Internet days.)

The Jerome Friar Collection contains approximately 240 (on 13 different rolls of film) images of the quilt on the National Mall. The images taken on October 11, 1987, 1989, 1992, and circa 1995-1997 show how the quilt’s display evolved as the numbers of HIV/AIDS victims grew, as the disease became more widely diagnosed/recognized, and as some of the stigma associated with HIV/AIDS began to recede.

Friar was most likely assigned to cover the quilt when it was first displayed on the National Mall in 1987 because it was one of the first large public events organized by AIDS activists. In addition to the images of the quilt, Friar’s photographs also depict numerous HIV/AIDS-related demonstrations organized by groups such as ACT-UP, intended to raise awareness of the disease among politicians in Washington in the 1980s and 90s.

If you’re on or near the UNC-Chapel Hill campus, don’t miss the chance to see the quilt panel while it’s in the Student Union, through January 31.

Photographs from the Jerome Friar Collection are available for research in the Wilson Special Collections Library at any time. Come visit us!

1. Contrary to plans, the 1928 silver anniversary commemoration of the Wright Brothers’ first flight at Kitty Hawk didn’t feature a fly-over by squadrons of Naval airships from Virginia. Why?

2. “There is not a modern New York hostess, scarcely even an old-fashioned one, who does not have cigarettes passed after dinner.” This social advice was offered by Emily Post, Amy Vanderbilt or Gloria Steinem?

3. The granddaughter of what president died in North Carolina in 2008?

4. Encouraged by the Soil Conservation Service, Rutherford County farmers in 1942 set out 50,000 of what kind of plants?

5. Which Wilmington has more population, North Carolina’s or Delaware’s?

2. Emily Post, author of the 1922 classic “Etiquette,” who also appeared in ads for Old Golds.

3. Teddy Roosevelt. Theodora Roosevelt Keogh O’Toole Rauchfuss had been a ballerina and novelist before settling in obscurity in rural Caldwell County. She died Jan. 5 at 88.

4. Kudzu. Until its invasiveness made it unwelcome, this Japanese vine was widely used to combat erosion across the South. The Forest City soil conservation agent recommended carrying plants to the field “between wet sacks or in damp sawdust.” 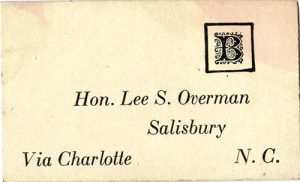 I’m stymied. I obtained these place cards from a collector who was breaking up a full set of U.S. senators said to have attended a presidential — perhaps — dinner.

If so, because of the long and nearly simultaneous tenures of Lee Overman (1903-1930) and  Furnifold Simmons (1901-1931), the hosting president could have been Roosevelt, Taft, Wilson, Harding, Coolidge or Hoover. 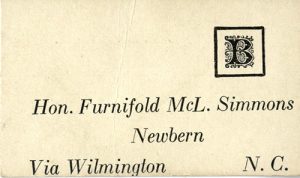 Overman was from Salisbury, Simmons from New Bern — simple enough. But what about “Via Charlotte” and “Via Wilmington”? Railroad connections? Why would that be worth mentioning?

1. True or false: Among the crimes requiring the death penalty in early 19th-century North Carolina were burglary, bigamy, sodomy, highway robbery, dueling where death occurs and hiding a slave with intent to free him.

2. In three years FDR’s Works Progress Administration built 63,311 of these in North Carolina — what were they?

4. The otherwise obscure Ervin T. Rouse, a native of Dover in Craven County, wrote what has been called the best-known fiddle tune of the 20th century. What was it?

5. In 1895 after the N.C. legislature passed a resolution honoring the recently deceased abolitionist Frederick Douglass, protesters demanded a $10,000 loan for what purpose?

1. True. One explanation for such an extensive list: The lack of a state penitentiary left no suitable alternative to capital punishment.

2. Outhouses. Typically built with concrete floors and ventilation shafts, they were an effective deterrent to hookworms and other public health concerns.

3. A “Hoover Cart Rodeo,” a parade of 300 cannibalized, mule-powered automobiles. Hoover carts, like shanty-town Hoovervilles, linked the Depression to President Herbert Hoover. Each parade entrant received a three-pound bag of grits and a pass to see the Marx Brothers in “Horsefeathers.”

4. “Orange Blossom Special,” composed in 1938, along with the less successful “(I’ve Got Those) Craven County Blues.”

5. To build a Confederate monument on the Capitol grounds. After organizing first to bring home and rebury the state’s dead from Gettysburg, Confederate widows broadened their cause to building monuments and otherwise glorifying the Lost Cause. 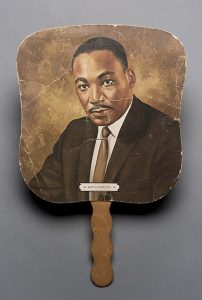 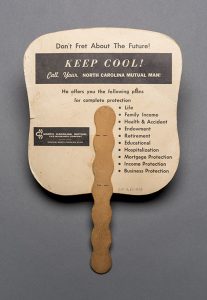 — The typically un-air-conditioned churches that accommodated not only worship services but also civil rights meetings.

A few days ago on January 9th, The Herald-Sun published a story online titled, “When Martin Luther King Jr. came to Durham.”  The article included a photograph of King and others walking on Durham’s West Main Street on February 16, 1960.  They were on their way to the F. W. Woolworth & Company lunch counter, which the store had kept closed after the February 8th sit-in by North Carolina College (now North Carolina Central University) students protesting against segregated seating.  That protest came on the heels of the Woolworth’s lunch counter sit-in at Greensboro, North Carolina on February 1st.

The North Carolina Collection Photographic Archives is the home of The Herald-Sun negatives.  There are two sets of negatives in the collection that document King’s 1960 trip to Durham: twelve negatives by Jim Thornton of King’s walk to Woolworth’s, and twenty negatives attributed to Harold Moore (based upon a caption in The Durham Sun) that depict two views of sidewalk picketers and twenty-one negatives of King visit to White Rock Baptist Church.

The above negative by Thornton has a punch-hole beneath the image area, which typically designates the photographer’s or editor’s choice images.  Neither The Durham Morning Herald nor The Durham Sun published that view.  Instead, the latter published a cropped view of the following negative . . . removing the young bystander of history on the far left.

During the evening, King spoke at a filled-to-capacity White Rock Baptist Church.  King’s speech has been dubbed informally his “Fill Up the Jails” sermon.  As The Durham Sun reported:

‘Let us not fear going to jail if the officials threaten to arrest us for standing up for our rights.’  Negroes must be willing ‘to fill up the jails of the South’ to gain their point. . . . Maybe it will take this willingness to stay in jail to arouse the dozing conscience of our nation.’