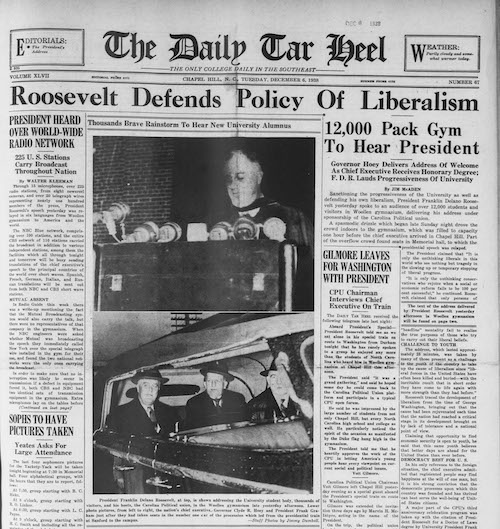 This month marks the 80th anniversary of a speech by President Franklin D. Roosevelt at UNC, an event that is considered significant in FDR’s political career.

Roosevelt’s arrival on December 5th, 1938 was the first visit to Chapel Hill by a sitting U.S. President in the 20th century. And his speech took place scarcely a month after midterm elections in which the Democrats lost 72 seats in the U.S. House and seven seats in the U.S. Senate.

William E. Leuchtenburg, an emeritus professor of history at UNC-Chapel Hill and an expert of Roosevelt’s presidency, says some questioned whether the New Deal and Roosevelt’s liberal outlook could survive.

“This was the very first time that Roosevelt had made a public address anywhere since his setback in the 1938 elections,” Leuchtenburg said. 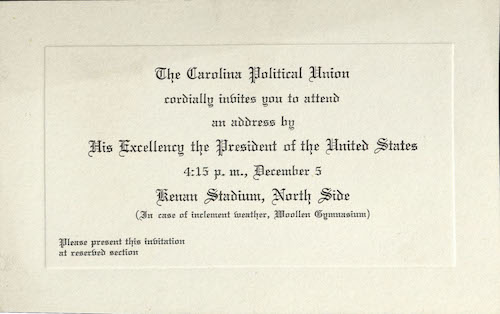 Roosevelt came to Chapel Hill at the invitation of the Carolina Political Union, a non-partisan student organization that promoted discussions on political and government issues. He spoke at Woollen Gymnasium, a venue selected after rain forced the cancellation of an outdoor appearance at Kenan Stadium.

More than 6,000 people packed into the gym. Those unable to squeeze into that location could listen from Memorial Hall where the speech was piped in. The CBS and NBC radio networks broadcast Roosevelt’s voice live on more than 225 stations around the nation. The BBC also carried the speech in the United Kingdom. And those in Europe could listen over shortwave to the speech translated into French, German, Italian, and Russian.

The Daily Tar Heel reported that the podium from which Roosevelt spoke was bedecked with 15 microphones and that eight newsreel crews, equipped with five 1,000-watt lights, filmed portions of the speech. Writing about the speech in the next day’s paper, a New York Times reporter noted that Roosevelt repeatedly pulled a handkerchief from his pocket to wipe sweat created by the powerful lights.

Prior to Roosevelt’s remarks, Clyde R. Hoey, North Carolina’s governor, and Frank Porter Graham, UNC’s president, offered welcomes. Graham also presented FDR with an honorary Doctor of Laws degree. He cited the President for standing on the side of “oppressed minorities and disinherited majorities,” and for promoting an America that “stands for the freedom of open and wide discussions of all issues and a fair hearing for all sides, for the ways of peace and democracy rather than of war and dictatorship; for a new hope to you and a more equal educational opportunity to all children in all states.”

Leuchtenburg says Roosevelt was pleased to receive the degree from Graham, who was “regarded as perhaps the most important liberal in the South—a strong supporter of the New Deal.”

Roosevelt began his remarks by quoting Justice Benjamin N. Cardozo of the U.S. Supreme Court. Cardozo was considered an eminent legal scholar and had died in July 1938.

“We live in a world of change,” Cardozo wrote. “If a body of law were in existence adequate for the civilization of today, it could not meet the demands of tomorrow. Society is inconstant…..There is change whether we will it or not.”

Leuchtenburg says that, throughout his speech, Roosevelt sought to underscore openness to change and the importance of liberal thought.

“Roosevelt thought that what he could count on from young people was a new generation that, if one could appeal to them properly, would quite naturally be willing to move forward on more progressive paths,” Leuchtenburg said.

Roosevelt praised the University of North Carolina as “representative of liberal teaching and liberal thought.”

With his remarks, Roosevelt also hoped to portray himself as benign and “defang the criticism of him as someone who hated the rich,” Leuchtenburg said. Though, Leuchtenburg noted, during his 1936 campaign for president, Roosevelt did denounce the rich as “economic royalists” and said, “They hate me and I welcome their hatred.”

Roosevelt told his UNC audience that the press had portrayed him as “an ogre, a consorter with Communists, a destroyer of the rich,” and someone who, “‘breakfasted every morning on a dish of ‘grilled millionaire.'”

FDR drew laughter from the crowd when he said, “Actually I am an exceedingly mild-mannered person, a practitioner of peace, both domestic and foreign, a believer in the capitalistic system, and for my breakfast a devotee of scrambled eggs.”

Roosevelt listed some of his New Deal accomplishments — price supports for crops, federal insurance of banks, and social security — and then encouraged UNC undergraduates and young people listening on the radio to become politically active.

FDR concluded his speech by telling the audience that he feels a strong connection to the nation’s young people. “And that is why I am happy and proud to became an alumnus of the University of North Carolina, typifying as it does American liberal thought through American action,” he said.

Roosevelt’s visit to Chapel Hill received extensive coverage in many newspapers the following morning. Among the details featured, the New York Times reported that members of the President’s traveling party became separated as they left the gym with the large crowd. Their separation caused a delay in Roosevelt’s departure for Durham, where he boarded a train to return to Washington, D.C.

An audio montage produced for WUNC 91.5 with William Leuchtenburg’s comments on FDR’s speech