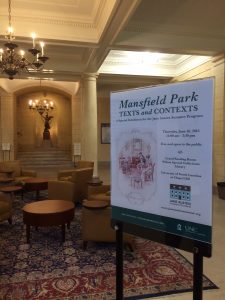 June 16–19, 2016, marked the fourth annual Jane Austen Summer Program (JASP) at UNC, a yearly event that brings students, scholars, and fans of Austen from across the country for a weekend-long immersion in one of Austen’s novels. JASP’s sophomore rare book exhibition, along with new events at the Ackland Art Museum and the Chapel of the Cross, drew guests to the University of North Carolina’s main campus. The program’s opening thus became an exciting opportunity for patrons to experience many of UNC’s impressive historical repositories.

“Mansfield Park: Texts and Contexts,” a one-day exhibition of rare materials drawn from Wilson Library’s Rare Book Collection, was curated by graduate students Rachael Isom and Taras Mikhailiuk, both of the Department of English and Comparative Literature, and featured a special guest label contributed by UNC undergraduate Jacqueline Leibman. With the generous help of Wilson Library staff, we collected 22 items that not only featured selected editions of Austen’s Mansfield Park but also drew on the literary, political, and aesthetic contexts in which Austen composed one of her most culturally conscious, if not always universally admired, novels.

The more capacious nature of Mansfield Park inspired a decided shift in the structure of this year’s exhibition. Whereas our first exhibition, “Emma at 200,” relied on direct textual allusions to recreate the insular world of Emma Woodhouse’s Highbury, “Mansfield Park: Texts and Contexts” sought to present just what its title denotes: a view of Austen’s third novel that remains conscious of, indeed expressive of, the cultural contexts that inform her novel. By dividing the exhibition into five thematic groupings, we were able to touch on several of the cultural conversations of which Austen partakes in Mansfield Park.

In keeping with JASP’s focus on Mansfield Park and its afterlives, the first section presented the novel itself, from Austen’s inspiration for Fanny Price in the poetry of George Crabbe to a first edition of the text and through 150 years of Mansfield Park publications. One of my favorite items appeared in this grouping: the owner of an 1866 Ticknor and Fields edition of Mansfield Park used Austen’s text to refute one of her critics. A well-positioned newspaper clipping proves that Austen does not, as the critic suggests, lack descriptions of natural scenery in her novels. Finding objects like this, where we can see readers’ continued engagement with Austen’s work, made curating this group of texts a fascinating and rewarding experience.

The exhibition’s second section drew literary allusions from Mansfield Park to reconstruct Fanny Price’s reading habits and the formation of her mind. Fanny, like Austen, adores Cowper’s Task and admires Wordsworth’s verses on Tintern Abbey. Patrons were excited to see writings beloved of both the novelist and her heroine.

Another significant literary allusion, though one decidedly not admired by Fanny, is Elizabeth Inchbald’s translation of Lover’s Vows, a text that launched our third section on Regency-era drama and theatrical production. From the Anhalt-Amelia exchange famously rehearsed by Edmund Bertram and Mary Crawford to a copy of Henry VIII that could have been read aloud by Henry Crawford in the Mansfield Park drawing room, this group displayed printed dramatic texts alongside contemporaneous advertisements to demonstrate the importance of performance during this period and within Austen’s text.

The final section, primarily comprised of illustrated texts, demonstrated the rage for picturesque touring and architecture during the Regency era. Humphry Repton’s Fragments (1816), an impressive folio with folding hand-colored landscape images, headlined this section, and our undergraduate contributor, Jacqueline Leibman, wrote an outstanding label description for Thomas Hunt’s Designs (1825), placing it in conversation with Repton and other more famous architects. This section also held an item much noted by guests: William Gilpin’s Observations on the Coasts of Hampshire, Sussex, and Kent (1804), a text that describes Fanny Price’s Portsmouth. Unexpected items like these, along with the first editions and famous titles, provided for our guests a well–rounded introduction to the texts and contexts of Jane Austen’s Mansfield Park.

As we reflect on this year’s exhibition, we look forward to again welcoming program participants and members of the UNC-Chapel Hill community to our third annual Wilson Library event next year. The rare book exhibition will join a full weekend of events celebrating the 200th anniversary of Austen’s Persuasion. The fifth annual Jane Austen Summer Program, “Persuasion at 200,” will take place on June 15–18, 2017. For more information, please visit www.janeaustensummer.org. 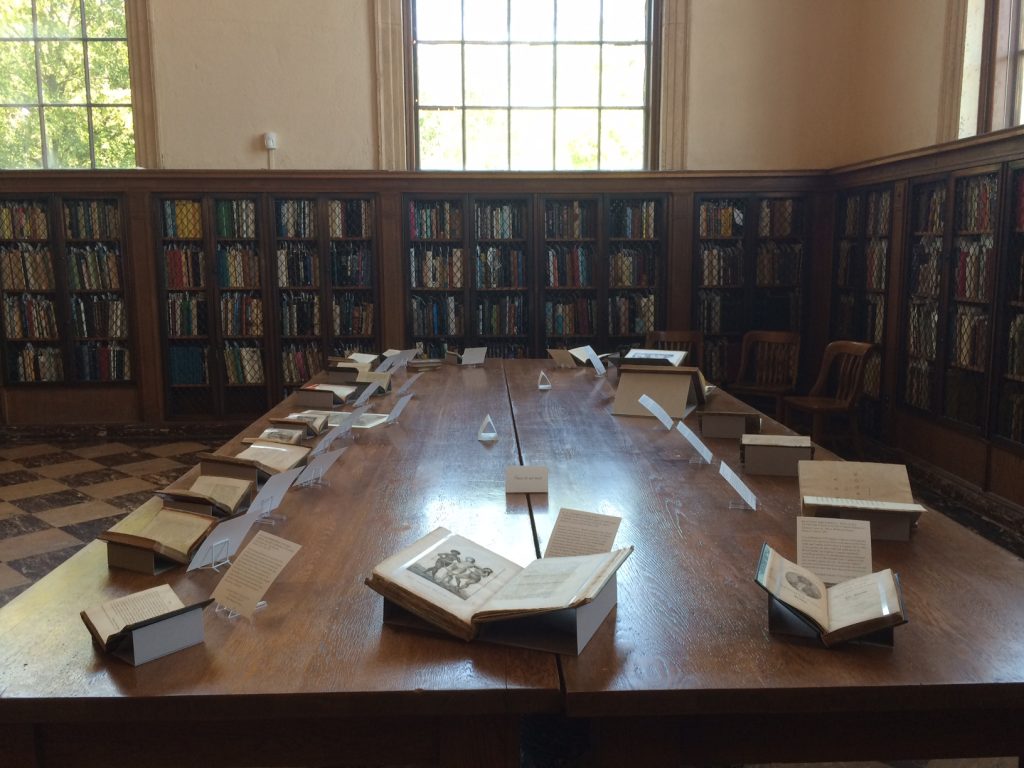 The curators offer special thanks to Elizabeth Ott, Anna Morton, and Claudia Funke for their tireless assistance in the development and display of this exhibition, and to Inger Brodey and James Thompson for their support of this year’s Jane Austen Summer Program event.

Rachael Isom is a Ph.D. student at UNC working in 19th-century British literature. Her research examines intersections of spirituality and poetics in women’s texts of the Romantic and Victorian periods. She also serves as assistant editor of the Keats-Shelley Journal and works as a project assistant for the William Blake Archive.

Taras V. Mikhailiuk is a Ph.D. student and Teaching Fellow in English at UNC. His research focuses on the negative poetics of Percy Bysshe Shelley and his fellow Romantic poets. He also serves as the editorial intern for the Keats-Shelley Journal. Taras, his wife, and their four young children live in Durham, NC.

Jacqueline Leibman is an undergraduate student in anthropology and pre-medicine at UNC. She is from Fayetteville, NC, where she graduated first in her class at Reid Ross Classical High School. She also has a strong passion for British literature and history.

From June 18th to 21st, nearly 100 graduate students, professors, secondary educators, and Jane Austen fans of all ages converged on Chapel Hill to partake in a weekend celebrating the 200th anniversary of Emma. Headed by UNC Professors Inger Brodey and James Thompson of the Department of English and Comparative Literature, the Jane Austen Summer Program (JASP) has now completed its third year and is quickly becoming a June tradition for Janeites from near and far.

While many of the festivities occur off campus at the Friday Center for Continuing Education, the 2015 program kicked off by introducing attendees to some of the fascinating resources on campus with an exhibit selected from the Rare Book Collection of the Wilson Special Collections Library. “Emma, at Home and at Play,” curated by UNC graduate students Rachael Isom and Ted Scheinman and displayed in Wilson’s Grand Reading Room, included a variety of items designed to offer textual, cultural, and historical entry points for guests, as they approached the events and discussions of the weekend.

Comprised of seventeen items from the Rare Book Collection, this exhibit took shape around three approaches to Austen’s novel: the first-edition text of Emma and its illustrated afterlives, books allusively woven into Emma’s daily life, and contemporaneous cultural artifacts that offer a more detailed entry into that lifestyle.

The first segment of the exhibit contained the 1816 Emma (which actually appeared in December 1815), the first of Austen’s novels to be published by John Murray, as well as two twentieth-century New York editions illustrated by C. E. Brock (1909) and Fritz Kredel (1964). Rounding out this section was a mid-twentieth-century critical work by R. W. Chapman, an object of especial interest because of its former ownership and annotations by C. S. Lewis.

The second section invited JASP attendees to consider the books that might have constituted Emma’s library at Highbury by showing examples of texts alluded to in the novel. Prolific eighteenth-century writers Oliver Goldsmith, Ann Radcliffe, and Thomas Gray were joined by lesser known authors of educational texts and Gothic novels to show the various reading interests of Emma, Harriet Smith, and other characters.

The final section grouped together books contemporary to Austen. From fashion plates in The Lady’s Magazine to sheet music by J. B. Cramer, cookbooks and pocketbooks to a unique family scrapbook, these items presented visitors with a sense of the larger social setting of Austen’s Emma. Perhaps guests could imagine Jane Fairfax playing one of Cramer’s sonatas or Mr. Woodhouse flipping through Mrs. Glasse’s Art of Cookery looking for the perfect gruel recipe. Thus, as JASP attendees returned to the text, they could take with them pieces of the culture in which it was written and set by Austen.

In its first year as a Jane Austen Summer Program event, the exhibit was well-received by attendees. Naturally, Austen fans were particularly excited to see a first-edition of Emma, but one guest also remarked that the display as a whole was “well-organized and informative.” Many also commented on the “beautiful” Grand Reading Room venue and look forward to more opportunities to visit Wilson Library.

One such opportunity awaits at next year’s Jane Austen Summer Program, which will feature a special exhibit inspired by Austen’s 1814 novel Mansfield Park. The event, slated for the weekend of June 16–19, 2016, will be open to the UNC-Chapel Hill community as well as to the program’s attendees. For more information, please visit www.janeaustensummer.org.

Rachael Isom is a Ph.D. student in the Department of English and Comparative Literature at UNC. Her research focuses particularly on the intersections of religion and literature in women’s poetry of the Romantic and early Victorian periods. She also serves as Assistant Editor of the Keats-Shelley Journal and works as a Project Assistant for the William Blake Archive.