With the recent adaptations of Sir Arthur Conan Doyle’s character Sherlock Holmes proliferating in television and film, I thought it would be interesting to see what works by Doyle could be found within the Rare Book Collection. The Rare Book Collection houses the Mary Shore Cameron Collection of Sherlock Holmes & Sherlockiana, which contains approximately 1,000 items related to Doyle’s famous detective, and has additional materials related to Doyle in other collections within the RBC.

Perusing the catalog, Doyle’s The Edge of the Unknown caught my eye. I thought this would be a good starting point for understanding Doyle within the context of flourishing spiritualism in the late nineteenth and early twentieth centuries.

Sir Arthur Conan Doyle published a full report of his investigation into the Cottingley fairies in 1922, The Coming of the Fairies, which you can read online here. In this book, he compiles evidence for the existence of fairies. (In case you were wondering, the sisters who created these alleged photos of fairies when they were 9 and 16 did finally admit to faking them in the 1980s.) Published in 1930, Doyle’s The Edge of the Unknown collects his essays on a number of supernatural phenomena, including Doyle’s belief that Houdini’s magic was indeed supernatural, despite Harry Houdini’s attempts to convince him otherwise. Doyle notes that he himself has “no spiritual gifts […] and none of that psychic atmosphere which gives a tinge of romance to so many lives.” (Doyle 158). He did have encounters with the supernatural with the help of mediums, which he details in the chapter “Some Curious Personal Experiences.”

From here, I wanted to see what other materials on Doyle and fairies existed in the collection, when I stumbled upon Richard Doyle’s In Fairyland: a series of pictures from the Elf-World (1875). Richard Doyle was the uncle of Sir Arthur Conan Doyle, and known for his illustration of the supernatural and the fantastic. As it turns out, an interest in fairies ran in the family, as his father, Charles Doyle (Richard Doyle’s brother), was also an illustrator known for his depiction of fairies.

Fairies were just one small part of the spiritualism that was sweeping the world at that time. Investigations into the paranormal were commonplace, leading to profuse publications on topics such as mesmerism, animal magnetism, and séances. The Society for Psychical Research was founded in 1882 to conduct scientific investigations of supernatural phenomena, and many publications from this society and other related materials can be found in the Rare Book Collection here at Wilson.

If you are interested in learning more, these titles in the Rare Book Collection may be of interest:

Melchior Gorles; a tale of modern mesmerism (1867); The Peckster professorship: an episode in the history of psychical research (1888); The spirit-rapper; an autobiography (1854); Experiences in spiritualism with D.D. Home (1924); Light in the valley: my experiences of spiritualism (1857); Spiritualism: its history, phenomena and doctrine (1918); The Margery mediumship (1929); Mrs. Piper & the Society for psychical research (1903); The secret commonwealth of elves, fauns & fairies: a study in folk-lore & psychical research (1893); Hypnotism, animal magnetism, and hysteria: abstract of an address delivered at the Sheffield Philosophical Institute (1893)

Halloween has passed. At the Rare Book Collection, however, ghostly apparitions continue to haunt our days. 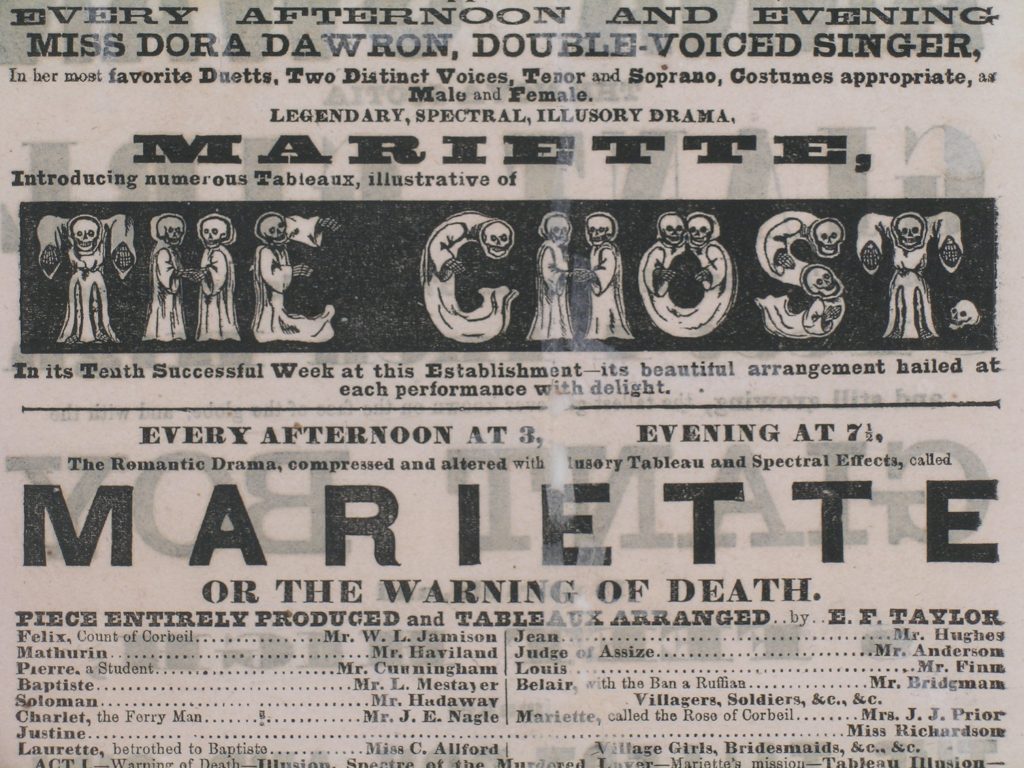 Among the spectral appearances is this P. T. Barnum show bill from exactly 150 years ago today, announcing “The Ghost,” a performance at the famous American impresario’s museum. The ephemeral printing for November 16, 1863, was in Wilson Library’s Conservation Lab receiving treatment for display in the upcoming Rooms of Wonder exhibition. While most materials in that show will come from the collection of alumna/curator Florence Fearrington, the RBC will supply a few choice items such as this one, which testifies to the commercialization of the cabinet of curiosities concept in the mid-1800s. (A giant boy and giant girl are among the museum’s other attractions for the day.)

The nineteenth century was an era of scientific progress. It was also one that had a strong fascination with the supernatural.  A recent donation to the RBC from Dr. Charles T. White, a volume of spiritualist writings, underscores this interest in the uncanny and suggests how spiritual doings were viewed as phenomena open to scientific inquiry. Inside this book, which has the spine title “Celestial Gems,” are a selection of texts and a detailed manuscript index.

The “General Index” begins with an alphabetical listing of the subjects and events in The Seeress of Prevorst, Being Revelations Concerning the Inner-life of Man, and the Inter-Diffusion of a World of Spirits in the One We Inhabit (New York: Harper & Brothers, 1845). This first work in the volume is an English translation of Justinus Kerner’s famous account of Friederike Hauffe, a sleepwalking clairovyant in a small town in Baden-Württenburg, Germany. Kerner was a poet and physician who came to know the woman.

Following Kerner’s classic work is Elements of Spiritual Philosophy; Being an Exposition of Interior Principles. Written by Spirits of the Sixth Circle. R.P. Ambler, Medium. The author of this rare 1852 Springfield, Massachusetts, imprint was a Universalist minister who claimed the power to speak for spirits, hence his self-identification as a “medium” on the title page. He briefly published a journal, The Spirit Messenger, issues of which are also present in “Celestial Gems.” For Ambler, communication with spirits was a new stage in religion and represented a release from traditional superstition, contrary to what we might think today.

The pages of this book have evidence of past owners and readers beyond the index. Most evocative are the items laid in.  The unsettling albumen print above suggests a woman in a trance state, although lengthy photographic exposure times could necessitate an eerily frozen countenance. The “ADMIT BEARER” ticket found at another page might have permitted entrance to a staged mediumship séance, such as were not uncommon in the period. 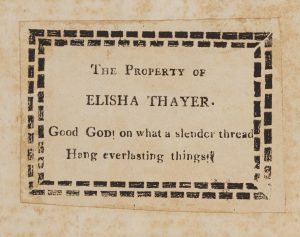 One Elisha Thayer’s book label appears twice in the volume, although we can make no claims for his leaving these relics behind.

“Celestial Gems” is a particularly compelling and ironic example of the book as material object–a physical manifestation of an earlier era’s encounter with the immaterial world.