Trekkies unite! 41 years ago today, William Shatner, a.k.a. Captain Kirk, spoke at Memorial Hall, where he gave a performance about the history of science-fiction.

However, the Enterprise captain experienced less-than-smooth sailing in Memorial Hall on November 4, 1976.  The Daily Tar Heel reported on November 8, 1976, that Shatner “couldn’t command the film projector of the PA system to work” and was therefore unable to show planned video footage.

Despite the lost battle against machines, Shatner continued his performance with gusto. Although many guests left because of the technology problems, those who stayed enjoyed a passionate performance.

His appearance at UNC was part of a 40-day tour of 40 colleges and universities, and his performance at Hofstra University was recorded for distribution. 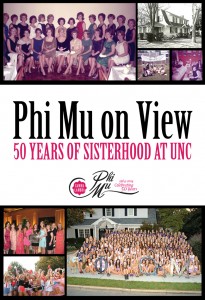 This weekend, many alumni and their families will return to campus for Homecoming, but for the sisters of Phi Mu’s Gamma Lambda chapter it will be an especially exciting occasion. The chapter is celebrating its 50th anniversary with a weekend of events including an exhibit in the lobby of Wilson Library.

The exhibit “Phi Mu on View” will feature the chapter’s 1964-1965 pledge scrapbook, records and photos related to the chapters’ purchase and renovation of the historic Brockwell House, the first issue of the Gamma Lambda Triangle, and much more. The chapter loaned these materials to University Archives last year.

The exhibit opens at noon on Friday, November 14th and will run through the weekend.

There have been two recent conferences in our area recently, and another is coming soon.  The annual Librarians’ Association of UNC (LAUNC-CH) conference took place Monday, March 10th at the Friday Center.  If you missed out on the conference, you can take a look at the live tweets here. Ann Cooper, one of UARMS’s graduate assistants,  presented on a project to preserve legacy born-digital media such as floppy and optical disks at the LAUNC-CH conference.

LAUNC-CH will also be holding a Research Forum on May 8th from 1-4 in Wilson Library.  The research forum will have a poster session along with sessions on instruction and outreach and on collections and access. Morgan Jones, a Carolina Academic Libraries Associate working in UARMS, will be presenting a poster on her research on collaborations within archives and special collections at the Forum.

The Society of North Carolina Archivists also just had its 2014 Annual Conference on April 8th in Raleigh.  This year’s theme was “Connect, Create, and Celebrate: Archives in the 21st Century.”  You can follow SNCA on Twitter at @NCArchivists.

Have we left out any conferences?  Let us know in the comments!

Over the past year and a half, UNC Chapel Hill’s University Archives has actively pursued student groups in an effort to better represent the history of student life. However, there are a lot of student groups to choose from on our active campus. One of our priorities has been to collect Greek life materials. Because more than 3,000 students on our campus are involved in Greek life, fraternities and sororities are a part of the Carolina Experience for many students.

This semester, Phi Mu will be the first of UNC’s sororities to deposit its materials in University Archives for safekeeping. While we have some fraternity records (including Delta Kappa Epsilon and Chi Psi), sorority records have been noticeably absent in our holdings. As the Gamma Lambda chapter of Phi Mu approached planning for its 50th anniversary in 2014, alumnae began to reflect on their chapter’s history. Realizing that historic materials were stored in several disparate places and that many items could use conservation and preservation, they were eager to find a way to store them in a single location under archival conditions. Participating in the new University Archives initiative will accomplish this and facilitate all future anniversary research.

When Phi Mu’s Gamma Lambda chapter colonized at Carolina in 1964, the Board of Trustees had just approved the admittance of women regardless of their residence or major; however, admittance was still extremely competitive because of the scarcity of housing for female students. With the loan of Phi Mu’s 1964-1965 scrapbook and other materials to University Archives, researchers and chapter sisters alike will be able to understand how Phi Mu began its first 50 years on Carolina’s campus.

We look forward to working with Phi Mu as well as other sororities this year to increase the representation of Greek organizations in University Archives!

If you are a member of a Greek fraternity or sorority and wish to deposit materials in the archives for safe keeping, please contact us! 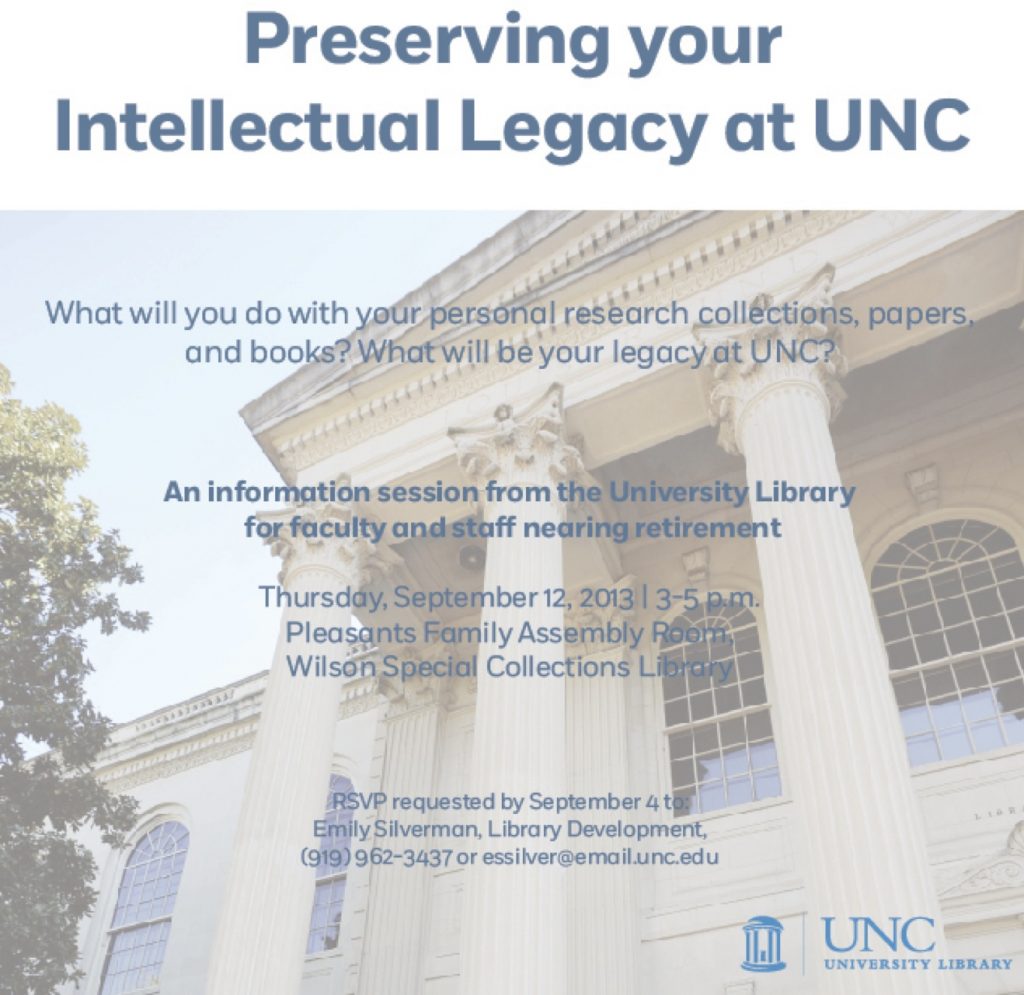 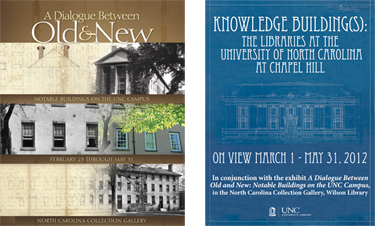 END_OF_DOCUMENT_TOKEN_TO_BE_REPLACED

Ever wonder what library rules were like in 1799, soon after the founding of the University of North Carolina library?  In this gem of an entry from the General Faculty and Faculty Council Records, the Board of Trustees write the rules for the library.  Notice that some things never change: reference books remain in the library for the most part, call slips go out with books, and fees are paid for “defaced” books.

The university acquired its first book in 1785: “The Works of the Right Reverend Father in God” by Father Thomas Wilson.  Though it was still eight years before the founding of the first state university, the book was placed in the New Bern Academy for safekeeping until the university opened its doors

The building they are writing about in the 1799 rules is still standing, though it is no longer a library.  The Philanthropic Society Library was housed in Old West, and was one of only a few university buildings.  There is evidence, though, that aside from the well-stocked “society” libraries, the University Library remained in a 9 feet by 12 feet room in the President’s House until 1814!

The library was only open 2-3 hours per day as late as 1885, which put a damper on students camping out during finals.  Librarians, of course, were not SILS educated, but instead members of the Philanthropic Society who volunteered their time as university librarian to watch over the collection, which numbered a few hundred books.

All students paid a fee of $1-2 per semester until the early 1800s, when the university allocated $250 per year to the library.  The library endowment is now well into the millions, and student fees (though most of the fees are not for the library) are thousands of dollars.

END_OF_DOCUMENT_TOKEN_TO_BE_REPLACED

June 9th is Ask Archivists Day on Twitter.  By tweeting questions to @AskArchivists or using the #AskArchivists hashtag you can get all sorts of questions answered by archivists around the globe.

So ask away!  But remember that University Archives staff is here everyday to answer any questions you may have about what we do and what we have here at University Archives, UNC history, even records management.  And if we can’t answer your question, we will refer you to someone who can.

This past spring, Jay and Meg worked with colleagues in the North Carolina Collection to curate an exhibit titled From Di-Phis to Loreleis: 150 Years of Student Organizations at UNC.

The exhibit provided us with a great opportunity to reach out to student organizations and groups interested in preserving their piece of Carolina history.  In April we held Students Make it Last Longer, an event to promote the exhibit and increase student interest in the Archives.

We are proud to say that the event was a success!  Many students came to look at the exhibit, have a snack, chat with us, and learn more about donating their student organization records to the Archives.  Here are some photos that Jay and Meg took at the event–

If you’re in a student organization or group and are interested in working with University Archives to preserve your Carolina legacy please contact us, we’d love to chat with you!