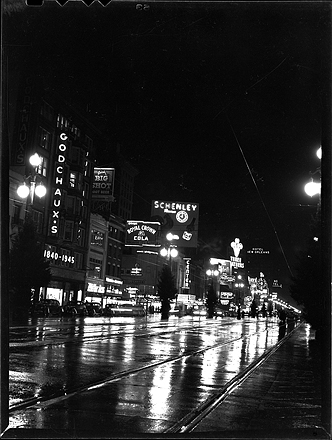 Why feature photographs made in New Orleans in 1945 by a North Carolina photographer? Because they are great examples of the hidden riches that await us! They also serve as good samples to explore the far reaches of blogging on the Internet as an aid in processing a photograph collection. Plus, Hugh Morton loved jazz.
The Daily Tar Heel, UNC’s student newspaper, ran an article on Sunday, 27 September 1942 about Morton’s return to campus to photograph the prior day’s football game for the paper before his Tuesday entrance as a technical sergeant in the Army’s photography division. The feature also noted that Morton reminisced on how he “got his start at Carolina by taking pictures of Hal Kemp, University alumnus.” James Hal Kemp (1904-1940), who attended UNC from 1922 to 1926 but did not graduate, was one of the most noted “sweet-swing” band leaders of the 1930s. (Kemp’s papers are in the Southern Historical Collections in Wilson Library). The article stated that Morton was so pleased with his photographs that, “He now has pictures of every nationally known band in the country with over 100 snaps of Benny Goodman, some of which have appeared in Downbeat, music magazine.” We’ll be keeping all four of our eyes open for those.
The photographs featured in this post are found in an envelope that contains twenty negatives and is labeled, simply, “New Orleans.” One of those negatives is a night scene looking down Bourbon Street. On the right is the The Old Absinthe House Bar and farther down the street is Club Bali; on the left is the Famous Door Cocktail Lounge. The automobile license plates on the right are dated 1945, confirming the date on Godchaux’s marquee in the image above. 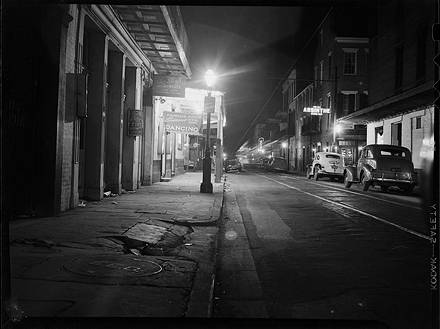 What was happening with Hugh Morton in 1945? He was wounded in March, a few days after photographing General Douglas MacArthur reviewing the 25th Division on New Caledonia, and received his honorable discharge from the United States Army on 30 June. He married Julia Taylor on 8 December.
Within the batch of New Orleans negatives are a few outdoor scenes depicting a couple wearing longer coats, suggesting he was there during a colder time of the year. Duke University’s football team defeated the University of Alabama in the Sugar Bowl on January 1st. Perhaps Morton was there to photograph the football game? Thus far we’ve not located any negatives of that event. Maybe he was on leave? One negative depicts a group seated in a hotel room: Morton in civilian clothes, another man in a military uniform, and two women. 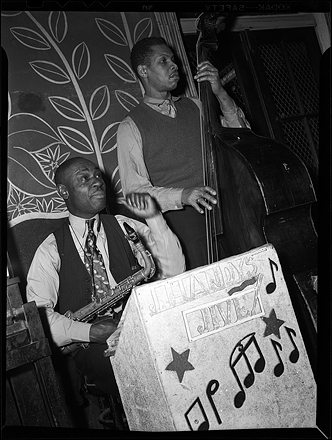 Whatever the date of his visit, Morton headed to the jazz clubs with camera in hand and he photographed three performances. Only one set is identifiable from the content: two negatives of Captain John Handy (1900-1971) and an unidentified upright bass player. 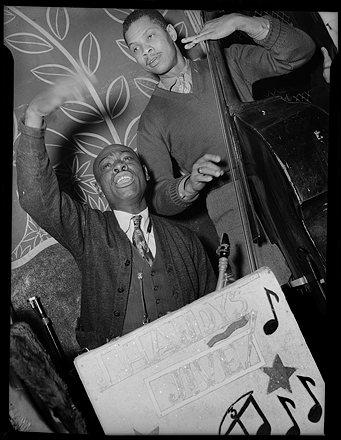 A second setting records another group, apparently a quintet, the only recognizable character being the bopping Santa above the stage backdrop. Santa says it might still be around New Year’s Day. 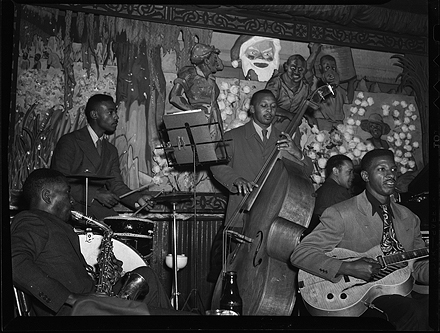 To round out the photographs of jazz musicians, here’s an unidentified piano player in what appears to be yet a third club setting: 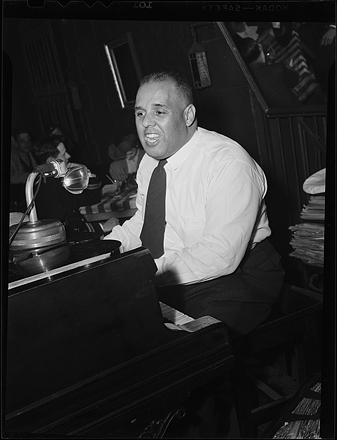 Any jazz historians out there who can place a name to some of these unnamed faces?