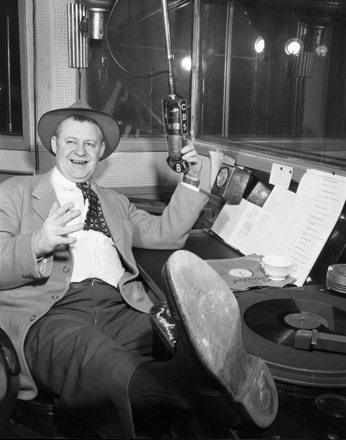 I became familiar with WBT Radio announcer Grady Cole’s lovable, memorable mug early on in my work with the Morton collection, but haven’t been able to find out much about him (other than the fact that a civic center in Charlotte bears his name).
There is a brief bio of Cole on page 50 of Making a Difference in North Carolina (where the image above also appears), which reads in part:

WBT Radio’s greatest star (and money maker), was an original, laid-back performer who dominated the morning air waves for over 25 years. “He talked with people, not at them,” says Charles H. Crutchfield, “and listeners believed in him and whatever he was selling.” 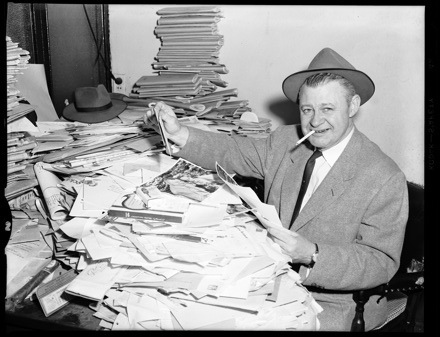 Then I discovered the wonderful website BT Memories, an archival web project by and for former employees of WBT/WBTV Charlotte. This well-designed site is a treasure trove of photos, videos, articles, and reminiscences from the Jefferson-Pilot-owned stations. It’s here that I found a hilarious recording of Cole made during his noontime farm report. (Go to the Sound Vault and scroll down to “Breakups and Screwups” if you want to listen, but be warned — the clip contains some spicy language).
What a voice, and a personality! I can see why he was so popular.

Perhaps former WBT employees can share some Grady Cole stories, or help identify the some of the folks in the image below, taken at the celebration of Cole’s 25th anniversary at WBT (in what year)? 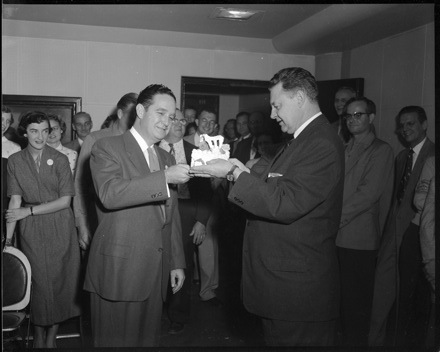 UPDATE, 11/10/08: Following up on Lew Powell’s comment about the pinback button — Linda Jacobson from the NCC Gallery provided me with the scan below, and it IS in fact the one worn by the woman in the photo above. Yahoo!

31 thoughts on “The Legendary Grady Cole”