This Saturday night, the #1 seeded UNC Men’s Tar Heels face the #3 Villanova Wildcats in the NCAA Tournament Final Four. I imagine here in Chapel Hill more than a few TVs and radios will be tuned to the 8:47 p.m. live broadcast.
While we wait for the outcome to unfold in Detroit, perhaps instead of imagining every possible permutation of player match-up, we should explore the historical, photo-documented precedents of Saturday’s game.
In the Morton collection two (and maybe more — I haven’t yet seen any photographs from the 1991 or 2005 tournament games) significant meetings of UNC and Villanova are captured. Both were in the regional semi-finals (Elite 8): one in 1982, the other in 1985.
There is much talk in the sports media about how Villanova is reaching the Final Four for the first time since 1985, and how they arrived in that year only after defeating North Carolina 56-44 in Birmingham. It was a disappointing and unexpected loss for the Tar Heels, and the hangdog expression of forward Dave Popson, sitting in the locker room after the game, gives every indication of this. 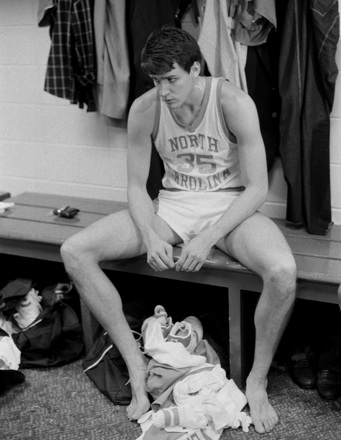 The one benefit of that ’85 UNC loss was that it created a notable NCAA tournament “Cinderella Story,”  due in part to charismatic Villanova head coach Rollie Massimino, who took the #8 ranked Wildcats to the championship with the ingenious idea that a team had to “play to win instead of playing not to lose.” Here is a Morton picture in which some of that charisma is on display: 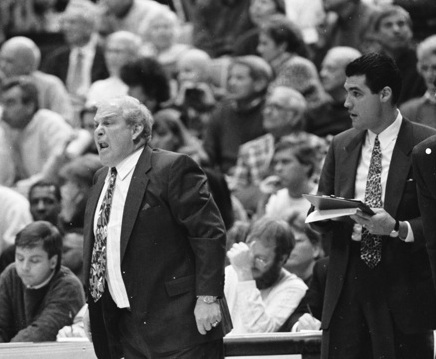 This picture is not from the 1985 game, but instead dates from around 1987. We know this because Jay Wright, the assistant coach of Villanova beginning in 1987, can be seen at the right of the frame holding a clipboard. If you watch tomorrow, you might be surprised by how little now-Head Coach Jay (Robot?) Wright has aged in those two decades.
Let’s forget about this 1985 loss, however, and focus on the general pattern which still shines favor on UNC, as their overall tournament record against Villanova is 3-1. Here’s an inspiring picture from one of these three wins: 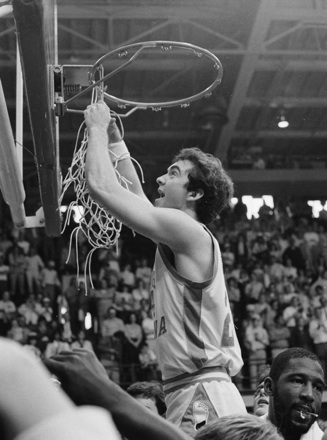 With Michael Jordan, James Worthy and other standout players on the 1981-1982 team, UNC was difficult to overcome, and they of course ended up winning the tournament (the 70-60 Regional semi-final victory over Villanova was just a step along the way). The jubliation in the face of Jim Braddock is unmistakable, as is the strand of net hanging out of James Worthy’s mouth.
I imagine the Carolina coaches and players will be too busy practicing drills and eating healthy, vitamin-rich meals to read this blog entry, but I hope for all the Heels fans out there that this post provides some inspiration for your cheering and well-wishing tomorrow night.