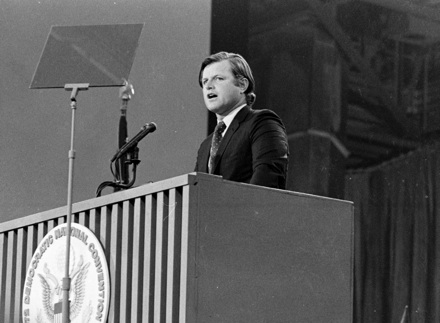 We’ve been writing way too many of these memorial blog posts lately . . . Hugh Morton images of the “Lion of the Senate” are pretty few and far between, but there are some, mostly from the 1972 Democratic National Convention in Miami Beach (see above).
I also found a few choice shots of Kennedy from the May 17, 1964 memorial for his brother, John Fitzgerald, held in UNC’s Kenan Stadium. The second image below shows Kennedy on stage with none other than Bill Friday. That’s Hugh Morton just visible at the right, so he could not have taken these photos. Wonder who did? 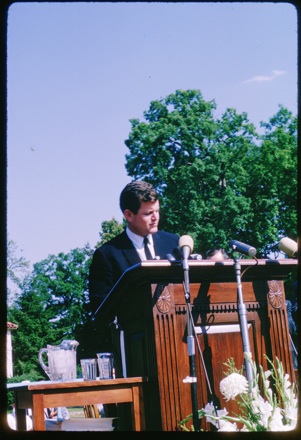 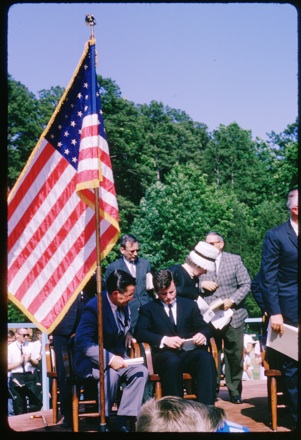 As I was preparing this blog post, I got the following email from library student assistant Kyla Sweet-Chavez:

Just thought you’d want to know that Morton saved the day today! UNC-TV was looking for some Ted Kennedy in NC footage, from a tribute service to JFK that the NC Film Board produced. Stephanie pulled the two copies from the collection and both were in pretty terrible shape, either no sound or lots of splices. I came up to work, saw what she was working on and remembered processing that film in the Morton collection. Pulled the film and lo and behold, it’s a really nice print with good color, sound and no splices. It’s been digitized to DigiBeta and is in the process of being sent off. Hurrah for Hugh and his collecting ways!

So, keep your eye out for that footage!

The “Stephanie” Kyla refers to above is the moving image archivist here in Wilson Library, and Kyla works for her — currently, on a project to process the Hugh Morton motion picture film. Kyla’s going to update us on that project in a separate blog post, coming very soon.