As mentioned in a comment earlier today, noted amateur golfer Billy Joe Patton of Morganton, N. C. passed away on New Year’s Day. Yesterday, the Golf Digest website published a tribute to Patton, which describe Patton as the “swashbuckler” of a handful of great players during “the last chapter of amateur golf’s golden era in the United States.” 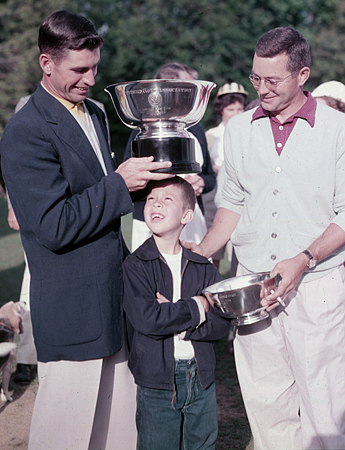 Patton is pictured above (cropped by me) after finishing second at the 49th Southern Amateur Championship held at the Linville Golf Club from June 14th through 18th, 1955—a little more than a year after he nearly became the first amateur to win the Masters at the fabled Augusta National Golf Club, which ended in a showdown playoff between legends Sam Snead and Ben Hogan. A detailed account of the 1955 Southern Amateur Championship notes that after the preliminary rounds, “It was then up to Harrison and Patton and they came through with a fine match to reward the hundreds who puffed up the hills after them.” If you look closely at Patton’s left hand, you’ll see he had a puff himself afterward!
Have a look at more photographs of Billy Joe Patton in the Hugh Morton collection.