An interesting revelation about a classic Hugh Morton photograph serendipitously unveiled itself last week while I was writing my previous post on the Good WILLmington Mission, which occurred mid November 1948 and stemmed from a tragic event that occurred during the final days of October of that year.  Researching issues of the Wilmington Morning Star on microfilm, I discovered a number of Morton photographs—including the one below in the November 8th edition that I recalled having seen several times before. 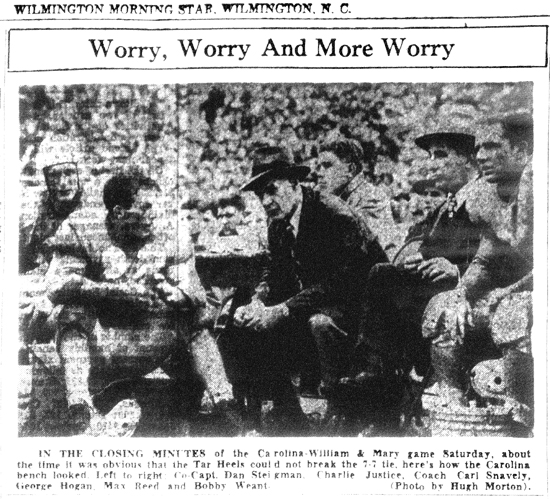 The beginning of the caption reads:

IN THE CLOSING MINUTES of the Carolina-William & Mary game Saturday, about the time it was obvious that the Tar Heels could not break the 7-7 tie, here’s how the Carolina bench looked. . . .

I made the digital copy you see above from the newspaper microfilm because often it is the easiest way to transcribe long captions when updating image descriptions in the online collection of Morton photographs.  With the scan in hand, I returned to the original focus of my digging expedition. Later, a quick check in the online collection located the stadium sideline scene below (without cropping), 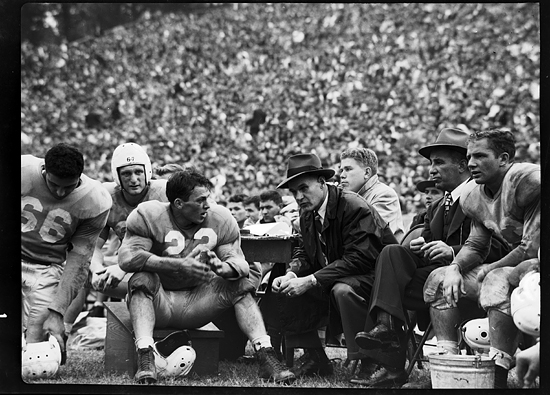 . . . but the image had the surprising title “1949 Sugar Bowl: UNC vs. Oklahoma” and its description read:

Did you catch that? Here was a classic Morton image of Charlie Justice, long associated with his last game with UNC—the 1950 Cotton Bowl played nearly 14 months later—because of its placement the chapter “End of an Era” in Choo Choo: The Charlie Justice Story by Bob Quincy and Julian Scheer published in 1958. In their biography of Justice, Quincy and Sheer’s caption reads, “Board of directors meeting at the final bowl.” And to compound the confusion, we had a subject heading for the Cotton Bowl, but our description related to the 1949 Sugar Bowl. (Note: I’ve since corrected the description, title, and subject heading.)
Another known appearance in print of the photograph is the June 19th, 1949 issue of Holiday magazine with the caption:

All American halfback “Choo Choo” Charlie Justice has confab with Coach Carl Snavely.  Justice with another year of playing eligibility has already become one of U.N.C.’s grid immortals.

Obviously that publication also predates the 1950 Cotton Bowl.
I passed this discovery on to our contributor Jack Hilliard, who also noted that the player uniforms in this picture are definitely from 1948.  He also noticed that Snavely is wearing a dark coat in the William and Mary photograph, but in photographs of the 1949 Sugar Bowl he is wearing a lighter-tone overcoat.  So looking more closely at Snavely, I noticed that he is wearing the same tie in both photographs!  Maybe it was his favorite game-day tie during 1948, because he is also sports it in a photograph shot after defeating the University of Texas on September 25th, 1948, an undated photograph with Wake Forest coach Peahead Walker, (if you click on those links and use the zoom tool—is that the same sports coat, too?!) and a photograph made just before the 1949 Sugar Bowl.
So with new evidence in hand, we need “Worry, Worry, And More Worry” no more. The “board of directors” photograph has been relocated to its proper place on the “Justice Era” time line.

5 thoughts on “Worry No More: a Charlie Justice photograph revisited”