This coming Saturday, July 23rd 2011, will be New River Celebration Day at the New River State Park located near Laurel Springs in Ashe and Allegheny counties of North Carolina.  What’s to celebrate? The river itself—the second oldest in the world—whose very nature survived a decade-long threat in the 1960s and 1970s.
The north and south forks of the New River wend their northerly way through northwestern North Carolina, meeting at their confluence to form the river’s main stem near the Virginia border.  The region had been traditionally rural farmlands, but on March 11, 1963 the Appalachian Power Company (APCO), a subsidiary the American Electric Power Company (the largest electric utility in the country) received permission from the Federal Power Commission to conduct a two-year feasibility study for the potential generation of hydroelectric power on the upper New River.
As a result, on February 27, 1965 APCO filed an application for its “Blue Ridge Project”—a proposal for a non-federal hydroelectric power project to construct two dams on the New River in Grayson County, Virginia with the upper dam’s reservoir extending into North Carolina. The reservoirs would have a combined surface area of more than 19,000 acres. In 1966, however, the Department of interior proposed a larger project that would help flush pollution from the Kanawha River farther downstream, which eventually became known as the Modified Blue Ridge Project. That plan called for more than 38,000 to 42,000 surface acres, requiring the displacement of least 2,700 inhabitants in nearly 900 dwellings, plus numerous industries, churches, cemeteries, and other structures.  And the power generated by the project was not for local resources but for distant customers.
In protest, citizens mounted a preservation effort that was soon joined by both the state and federal governments. The New River was not alone, however, in its plight.  The nation was undergoing a revitalized environmentalism movement in the 1960s, and the condition of America’s rivers emerged as a major concern. On October 2, 1968, the United States Congress enacted the Wild and Scenic Rivers Act, which specified three river segments within the country that qualified for protection, including a 26.5-mile stretch of the New River from its confluence with Dog Creek to the Virginia border.  With passage of this law, protected rivers could become part of a National Wild and Scenic Rivers System and the law offered two paths to achieve that protection.
The battle for the New River that followed was long and complex.  What is interesting from the Hugh Morton perspective is that the early stages of the preservation effort were in play when Morton briefly campaigned as a candidate for governor the Democratic Party in late 1971 and early 1972.  The headwaters of South Fork of the New River start from a spring at Blowing Rock in Watauga County, which as the crow flies is not far from Grandfather Mountain in Avery County.  Research into Morton’s campaign might reveal if he ever spoke publicly about the subject.
The following few years saw the first statewide effort to fight for the New River, including the Committee for the New River in January 1975. The National Committee for the New River organized in 1974. (A NCNR map of the project illustrates the area that would have been effected by the project.)  On May 26th, 1975 the North Carolina General Assembly designated that same 26.5 mile stretch of the New River included in the federal Wild and Scenic Rivers Act as a State Scenic River.  Morton’s photograph above dates from May 1975, one of several he took that month.  In 1976 the New River obtained its status as a National Scenic River, and the New River State Park opened in 1977. 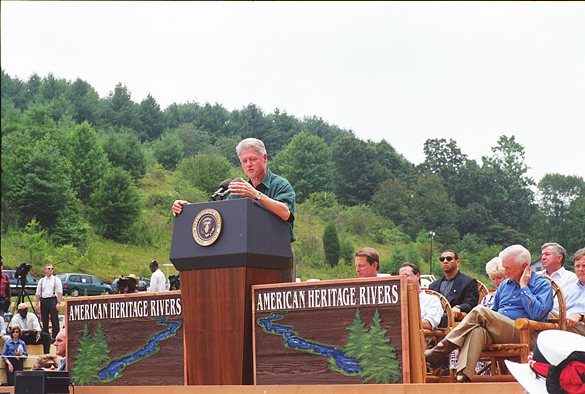