A View to Hugh closes out the year with a contribution from Jack Hilliard celebrating the December 30th anniversary of a notable Chapel Hill landmark, the Carolina Inn.
Have a Happy New Year! 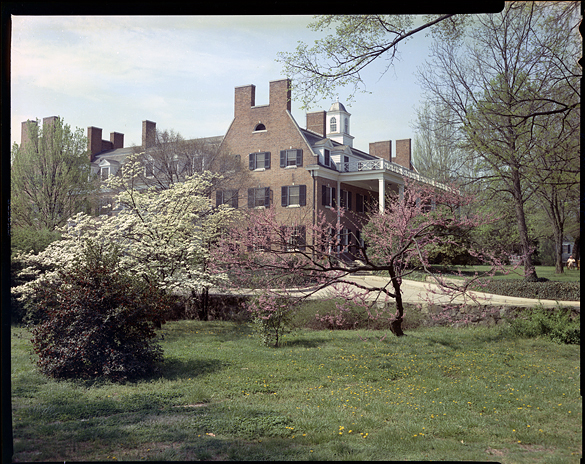 The committee searching for UNC’s new athletics director, Lawrence Bubba Cunningham, met for more than twenty-seven hours and interviewed thirteen candidates before making its recommendation to Chancellor Holden Thorp.  The final selection was announced on October 14th, 2011.  Those interviews were not held in the Ernie Williamson Athletic Center.  They weren’t held in the Smith Center, nor were they held in the Kenan Football Center.  They took place in another very special place on the UNC campus.  A place UNC President Emeritus Dr. William Friday calls “The Living Room of the University”—the Carolina Inn.
On May 5, 1965, noted movie and TV actor Richard Chamberlain stayed at the Carolina Inn while in Chapel Hill for the World Premiere of the movie Joy In The Morning, which was based on a novel by Chapel Hill’s own Betty Smith.  The film was featured at the Carolina Theater.
About a month after the famous 1949 UNC vs. Notre Dame football game in historic Yankee Stadium, Notre Dame President John J. Cavanaugh paid a courtesy visit to Chapel Hill and met with Acting UNC President William D. Carmichael, Jr. and UNC All America Charlie Justice.  That visit took place in the Carolina Inn as well.


Those visits were not unusual; many famous people have visited the Inn during its 87 year history—Eleanor Roosevelt, Kay Kyser, David Brinkley, Michael Jordan, Alexander Julian, Julius Chambers, John Motley Morehead, and Andy Griffith.  The list does go on.
It was ninety years ago this year, in the early fall of 1921, when John Sprunt Hill, distinguished alumnus and University trustee, checked into a Franklin Street hotel during a visit to the campus.  That hotel was likely the old University Inn.  Unable to sleep because of the unseasonably warm weather, Hill decided to take a walk across the moonlit campus.  When he arrived at the corner of Columbia Street and Cameron Avenue, he spent several minutes looking at the old wooden boarding house there operated by Mrs. Ralph Graves.  He envisioned a new more modern hotel on the site.  During the following months, Hill was able to purchase the boarding house and land from Mrs. Graves, and at the UNC trustee meeting on November 2, 1922, he proposed his plan for a “college inn,” which would be funded totally by alumni contributions.  To start the fundraising project, Hill offered the land and donated $10,000.  In early 1923, it became clear that the fundraising drive was not going to reach its projected goal of $100,000, so Hill decided to fund the entire venture on his own.  By the time the Carolina Inn’s dedication on December 30, 1924, John Sprunt Hill had invested over $250,000 in the building, equipment, and furnishings.  For the next ten and a half years, Hill maintained the inn.  Then on June 5, 1935, he presented the entire Carolina Inn property to the University.  In the following decades the Carolina Inn faced many challenges due the changing face of the university, but to this day it remains a featured centerpiece.
It seems that everyone who visits the Carolina Inn comes away with a favorite story.  Carolina’s great All America football star Charlie Justice was a huge fan of the inn.  He and wife Sarah lived there in early 1946 while they waited for a place in Victory Village.  Justice often recalled listening to a radio broadcast of Carolina’s NCAA championship game on March 26, 1946 in the lobby of the Carolina Inn.  The Justice family spent many nights at the inn during his playing days as well as football weekends during a span of 50 years.
One of my favorite Carolina Inn stories is one told by the late Bob Quincy, a former Sports Information Director at Carolina and co-author of the 1958 book, Choo Choo: The Charlie Justice Story.  On November 22, 1947, when Carolina defeated its arch rival Duke by a  score of 21 to 0, a Chapel Hill celebration was staged that was only rivaled by the one in 1929 when the Tar Heels beat the Blue Devils 48 to 7.  The dancing on Franklin Street went on for hours after the ‘47 game.  Finally, a weary bunch of Tar Heel fans, along with a couple of players, found their way to the Carolina Inn hoping to get a celebratory meal—only to find the dining room was closed.  James Weaver, an employee of the inn for forty years, met the students at the door and explained that closing time had long passed, but he said he would speak to manager Leigh Skinner to see if anything could be done.

“Sir,” said Weaver, “we just got to open up the dining room again.”
“We can’t, James,” said the manager.  “Rules are rules.”
“But you got the most important man in North Carolina standing out there goin’ hungry.”
“Do you mean to tell me Governor Cherry is in our lobby?”
“Oh, no, sir, not anybody like that.  I mean the MOST important—Mr. Charlie Choo Choo Justice.”

The dining room was opened and dinner was served.
Hugh Morton liked to tell the following story.  In April of 1953, Morton was hosting a banquet at the inn and needed an entertainer.  Someone suggested a young graduate student who was active in the Playmaker’s Theater.  Morton was able to hire the student for twenty-five dollars.  The student’s name was Andrew Griffith, and he delighted the audience with a hilarious monologue about a bumpkin at his first college football game.  Chapel Hill record producer Orville Campbell was in the audience and after the show rushed up to meet Griffith and told the young comedian he was star material.  Within a week or two, What It Was, Was Football was recorded and became a hit.  Not long after, Griffith was on Broadway in No Time For Sergeants.


“I don’t claim all the credit for his success,” Morton would say in a 1984 Greensboro interview.  “I’m sure anybody with Andy’s great talent would have made it without my help,” but it was a night to remember in “The Living Room of the University.”

One thought on “The Living Room of the University”