Winter has definitely descended upon North Carolina, so what better time than now to look at skiing photographs made by Hugh Morton.  In the Morton collection, most snow skiing photographs are grouped together as Series 6.6, but there are others filed by name of location in Series 1.
Cataloochee Ranch was the first facility to offer commercial skiing in North Carolina, which at the time was the highest and southernmost skiing resort in the eastern United States.  Cataloochee’s first skiers hit the slopes of Fie Top on Christmas Eve morning, Sunday December 24th, 1961.  On Christmas Day the Asheville Citizen carried a story (no byline) with a staff-photograph by Parris.  (Would this be the newspaper’s editor John Parris?)  Later in the season, The State published a short cover article by “Old Trudge” (a pen name used by Carl Goerch) in its March 3rd issue that began, “We hate to admit it, but we saw our first skiing recently.”
What brought Old Trudge to his reluctant observation?  Artificial snowmaking.
Snowmaking has its beginnings in the post-World-War-II Canadian airline industry, and its alpine skiing roots in 1950s New England resorts.  In his autobiography Mountain Fever, Cataloochee Ranch proprietor Tom Alexander wrote that he first had the idea for a ski slope at the resort in 1937—annotating the location of a “skin run” in the margin of a panoramic snapshot of the property.  Monitoring winter weather conditions, however, revealed that snowfall was too inconsistent to make a run of it.  Skiing at the resort was left to family members using homemade skis and golf clubs for ski poles.
Alexander came to learn of snowmaking technology by the late 1950s.  In 1959 and 1960 he and his wife twice traveled to New England ski resorts to see if the snow guns used by northern resorts would work in the southern Appalachians.  The Alexanders decided to “start small,” installing a rope tow at the base of Fie Top behind the ranch house, using a fishpond for water to make snow, and converting a cow barn into a ski lodge.  In keeping with the northeastern resorts, Cataloochee hired a European ski instructor, Karl Schoenschaller from Innsbruck, Austria.
Chronologically speaking, Cataloochees Ski Slopes’ opening date and instructor selection are interesting on two fronts: Squaw Valley, California hosted the 1960 Winter Olympics—only the second time in the United States, the first being Lake Placid, New York in 1928—and Innsbruck would host the 1964 winter games.  The Alexanders were apparently trying to catch the wave of excitement for skiing in the United States spurred by the Olympics.
According to the Asheville Citizen article, Cataloochee laid its first coating of snow on the evening of Thursday, December 22nd.  Three inches of natural snow fell on Friday night.  Then from Saturday night through dawn Sunday the snowmaking machines pumped out three feet of snow.  The ranch debuted its first run—1,000 feet long and 300 feet wide—that morning.  A 300-foot-long beginners slope opened by mid afternoon.  Word caught on quickly and 40 to 50 people skied that first day.  By March more than 200 people from the south and midwest would head to Haywood County to ski for a weekend.  At season’s end, the Alexanders “even showed a little profit.”  Perhaps more importantly to the Alexanders, they were able to extend the working season for their family members and staff, and help boost the local economy.

Cataloochee apparently hired Hugh Morton to photograph its ski activities and facilities two ski seasons later, because two images in the brochure “Ski Mile High Cataloochee in the Great Smokies” (see cover above) match black-and-white negatives in the Morton collection—including the photograph at the opening of this post. Given the time of year, it is likely that Cataloochee designed the brochure for the 1964-65 season.  What makes Morton’s photographs historically relevant is the decision by Cataloochee Ranch in 1968 to expand its entire ski operation “across the ridge” onto Moody Top to the north.  Morton’s 1964 photographs, therefore, portray the state’s first commercial ski operation before its significant upgrade just four years later.
In total there are twenty-three surviving black-and-white negatives from this assignment—fourteen labeled “Cataloochee Ski Slope (Use)” and nine labelled “Cataloochee Ski Slope (Reject)”—and two 4×5 color transparencies dated February 22, 1964.  As of this posting date, three of these images are available in the online collection.  (More may be added.)  Though not in the brochure, Alexander included the following Morton photograph in Mountain Fever.

There are also 35mm slides from this date in Slide Lot 009292, listed by location under Cataloochee in the finding aid—and this would be a good place to inject a bit of wisdom about conducting research using the Morton collection and finding aid: you need to be thorough and think broadly . . . and here’s why.
There is one slide in Lot 009292 (slide #18) that is labeled in handwriting “Cataloochee / H. Morton” and it is a color variant of the black-and-white photograph used in Alexander’s autobiography seen above.  None of the other slides in the lot are labeled. The lot is described as containing twelve slides, and the frame numbers printed by Kodak on the slides mounts are 2, 8, 11, 17, 18, 20 22, 32, 33, 34, 35, and 36.  Thirty-six exposures was a standard number of frames issued on a roll of film (twenty-four being another).  Knowing this, you might deduce that several sides from this roll of film were weeded out somewhere along the line.  But something else is may have happened . . . .
Slides 2 (a different pose of the model below shot on 4×5 sheet film), 8, and 11 look like Cataloochee scenes; slide 17, however, is a variant scene of an image printed in a brochure for Blowing Rock Ski Lodge!  (Note: The Blowing Rock resort first opened for the 1962-63 season, then became Appalachian Ski Mountain in 1968.  The next skiing post will look at Morton images from this resort.)
Did a Cataloochee image get into the Blowing Rock Ski Lodge brochure by accident, or did Morton move to the second location and continue with the same roll of film?  Well, after frame 18 (labeled Cataloochee) is slide 20, which is a mostly nondescript interior view of skiers in a cafeteria, and slide 22 is another variant view of a different scene in the Blowing Rock Ski Lodge brochure.  Slides 32 through 34 are also likely at Blowing Rock.  The location for slides 35 and 36 could be, too, but would need to be determined by someone who can recognized the mountain in the background.  But because there are so many gaps between frame numbers, the third possibility is that Morton weeded two or more rolls of film and combined the keepers from both into one box.  A dead give away would have been seeing the same frame number of two slides from different locations.
Because the slides in Lot 009292 have subjects and scenes look similar, the finding aid describes the lot as “Cataloochee.”  It wasn’t until further digging for this blog post (digging that given the immensity of the Morton collection could not have been done at the time of processing the collection) revealed that the lot actually contains work made at two resorts.  Plus there are no entries in the Finding aid for Blowing Rock Ski Lodge . . . only Appalachian Ski Mountain.  We’ll have to reckon with the images to see if the dates are the same for both resorts, then go back and update the finding aid with the conclusions.
So once again, here’s the take away: when researching the Morton collection, think broader than your specific topic and be thorough.  You may discover and resolve another “Morton mystery!” 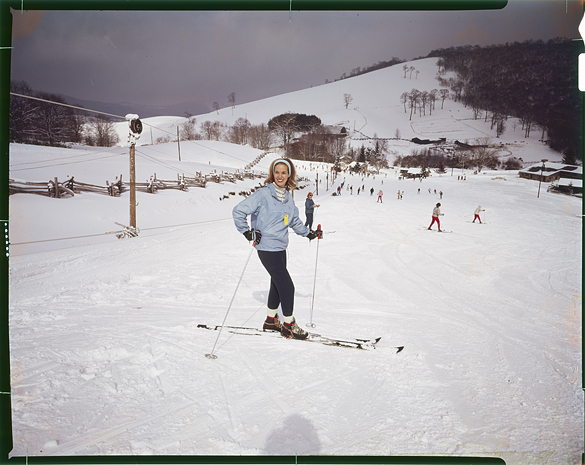 6 thoughts on “Photographing the slopes”