The 2015 Tar Heels season ended disappointingly Tuesday evening at the Russell Athletic Bowl in Orlando, Florida.  The game marked Carolina’s 32nd bowl appearance, but sadly for Tar Heel fans it became their 18th bowl loss.  Of the 31 previous bowl games, the Tar Heels won 14 and lost 17—and of those losses, the one on January 1, 1949 was “one that got away.”  Morton collection volunteer Jack Hilliard looks back at the final three games of the 1948 regular season and the 1949 Sugar Bowl.


When UNC Head Football Coach Carl Snavely walked off the Kenan Stadium sideline on November 6, 1948, Carolina’s bowl-game-future wasn’t likely on his radar.  His third ranked, undefeated Tar Heels had just played William and Mary to a 7-7 tie. His team was looking at three tough games remaining: Maryland in Washington, D. C.; Duke in Chapel Hill; and Virginia in Charlottesville.
On Sunday, November 7th Snavely was back at his home on Tenney Circle in Chapel Hill screening film of head coach Jim Tatum’s Maryland Terrapins.  A record Washington football crowd of 34,588 turned out for the game at Griffith Stadium, with an estimated 6,000 Tar Heel fans in attendance.  Carolina was able to reverse the proceedings from the previous week’s 7-7 tie, and dominated Maryland 49 to 20.
An interesting oddity from that Maryland game was the game day program.  There were two different programs: one cover showed a standard Lon Keller designed football player, while a second one offered a Hugh Morton image of Charlie Justice and Coach Snavely.  The inside front cover page of that program also differed from the standard program.  It featured a Bill Harrison cartoon biography of Justice. 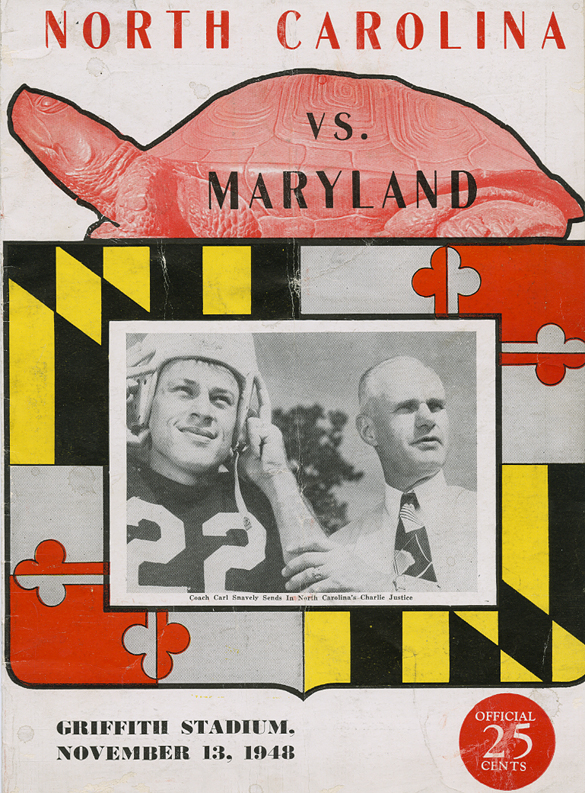 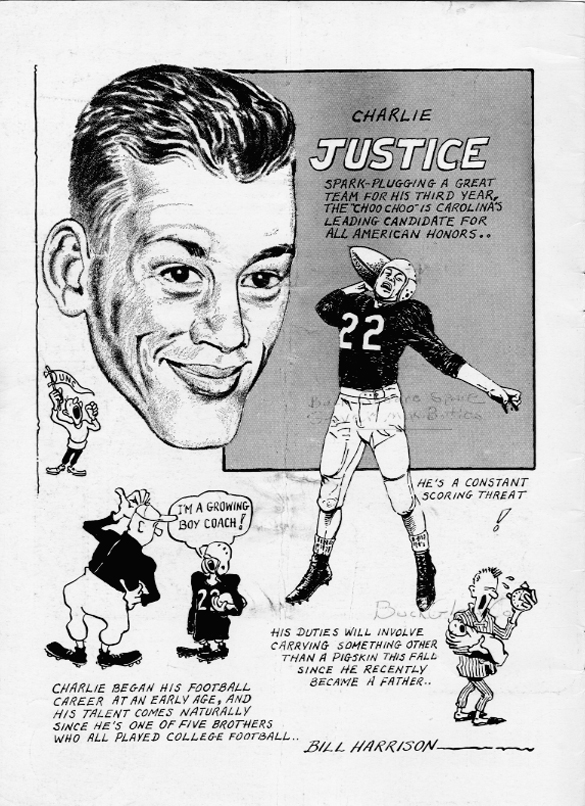 The weekend following the Tar Heel victory over Maryland saw another record-breaking crowd packed into historic Kenan Stadium for the 35th meeting between Duke and Carolina.  44,500 fans saw Charlie Justice’s 43-yard touchdown run break a 0-0 tie in the 3rd quarter as Carolina went on to claim the first Victory Bell win 20 to 0. Following the game, Coach Snavely said “I never saw a better run.” In a time long before the internet, Hugh Morton’s shot of Justice being carried off the field went viral and has been reproduced numerous times over the years.

Next up . . . the ‘Heels and the ‘Hoos in Charlottesville.
The week before the UNC–UVA game on November 27th, bowl-talk filled the newspapers.  The Orange, Cotton, and Sugar Bowls all showed an interest in the Tar Heels.  On November 22nd the Carolina team voted to accept a bowl bid if they could beat Virginia in the final game of the ’48 regular season. The players liked the idea of playing SMU in the Cotton Bowl or Oklahoma in the Sugar Bowl, but a New Year’s Day game all hinged on a win in Charlottesville.
An overflow crowd of 26,000 jammed into Scott Stadium in Charlottesville on November 27, 1948 to see the UNC’s number four ranked Tar Heels take on the Cavaliers of Virginia.  Carolina scored on its first possession and added two additional touchdowns to lead at halftime 21 to 6.  That additional touchdown was spectacular.  Carolina had the ball at its own 20-yard line.  Justice took the snap, paused momentarily, then ran through a huge hole between left guard and left tackle supplied by Bob Mitten and Ted Hazelwood.  Justice then outran Virginia’s Billy Marshall to the end zone 80-yards away.
Colorful halftime entertainment was provided by the Lenoir NC High band.  The Tar Heels couldn’t score in quarter number three, but picked up two touchdowns in the final stanza.  The final Tar Heel TD was another Justice beauty: a 50-yard run down the sideline behind fantastic blocking to seal the 34 to 12 win and complete an undefeated season, the first one since 1898.
Following the game at the Albemarle Hotel, which was UNC headquarters while in Charlottesville, head coach Carl Snavely announced that his Tar Heels would meet the Sooners of Oklahoma on January 1, 1949 in the 15th annual Sugar Bowl in New Orleans. Said the coach, “We got what we wanted . . . .”
An interesting sidebar to the ’48 Carolina–Virginia game involved a future president of the UNC system.  C. D. Spangler, Jr. became president of the consolidated university system in 1986.  Following Dr. William Friday, Spangler continued in that position until 1997; on November 27, 1948, however, he was an 11th grade student at Woodberry Forest, and was one of the 26,000 fans that jammed into UVA’s Scott Stadium to see Carolina play Virginia.  Leading the Tar Heels that Saturday afternoon was junior sensation Charlie Justice.  On one of Charlie’s plays, his number 22 jersey was torn.  Equipment manager “Sarge” Keller quickly got out a new one, tossing the torn one over behind the bench. Spangler quickly called a Carolina cheerleader over and made a deal to get the torn jersey.  He kept the prized souvenir for over fifty years. Then on November 20, 1999, during halftime of the Carolina–Duke game, Spangler presented the jersey to then UNC Athletic Director Dick Baddour and it is now in the Charlie Justice Hall of Honor at the Kenan Football Center on the UNC campus.  And of course Hugh Morton photographed the jersey presentation ceremony.
Off to New Orleans

The majority of the ’48 Tar Heel football squad arrived by plane at its Sugar Bowl training site in Hammond, Louisiana at 4:30 PM on December 19th…the additional 15 members of the traveling party arrived by train later that evening.  In the second group was Tar Heel end Art Weiner and his bride of three days. Southeastern Louisiana College played host the Heels. Training started on the 20th and continued through the 24th.  A quick trip to New Orleans for Christmas Day…then it was back to Hammond for more practice.
Many Tar Heel fans traveled to the Crescent City, too.  As an earlier post recounted, several, including Hugh Morton, managed to have some exotic fun in New Orleans. 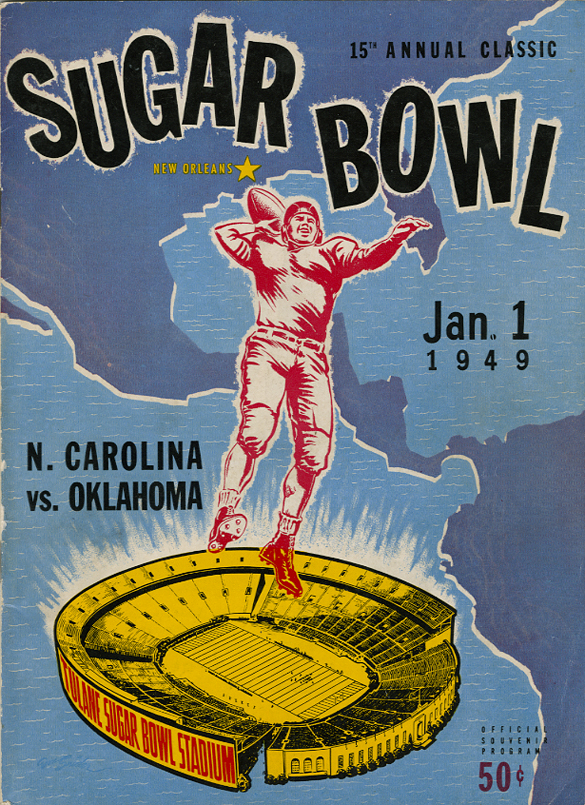 An early Saturday morning return to New Orleans on January 1st signaled the start of the big day as a record 85,000 fans jammed into Tulane Stadium, including photographer Hugh Morton who had working arrangements with several North Carolina newspapers including the Charlotte News, Greensboro Daily News, and High Point Enterprise.
Carl Snavely’s third-ranked UNC Tar Heels were primed and ready for Bud Wilkinson’s fifth ranked Oklahoma Sooners as was ABC’s national television audience. (The TV was not available back in North Carolina because the AT&T long lines had not been completed into the state and wouldn’t be until September 30, 1950, so the folks back home were tuned to Harry Wismer on the ABC Radio Network).  Prior to the kickoff, Coach Snavely and Justice, who had been a bit under the weather all week, posed for Morton’s camera along with ABC broadcaster Wismer.

Then it was time for some football.

Carolina’s first-possession-drive started at its own 37, and with Justice leading the way moved swiftly down to the Oklahoma 15 on seven plays.  Then, Justice’s pass to Bob Kennedy in the flat was a bit late, and Oklahoma’s Myrle Greathouse intercepted and was off to the races.  Tar Heel Eddie Knox finally caught him 72 yards later at the Carolina 13.  It took the Sooners eight plays to score and take a 7-0 lead at the 8:10 mark.
On Oklahoma’s next possession, Lindell Pearson fumbled and Carolina’s Joe Romano recovered at the Sooner 30.  Four plays later, Hosea Rodgers scored—after being set up by a nine-yard run by Bob Kennedy to the Oklahoma three.  Bob Cox’s PAT attempt was wide right so the score at the 13:55 mark was 7 to 6.


With four minutes left in the second quarter, Carolina started a 10-play drive that ended up at the Oklahoma 7.  The big play in the drive for the Heels was a Charlie Justice 23-yard run plus a lateral to Chan Highsmith that added 11 more yards to the Sooner 7.

Then four passes failed—one of which many old time Tar Heels will never forget.  As time was running out in the first half, Justice went back to pass.  He had Art Weiner wide open in the end zone, but Weiner was not able to make the catch.  “Justice threw me a perfect pass,” Weiner recalled in a 1976 interview.  “I was supposed to cut toward the sideline on the left.  Darrell Royal (a future University of Texas head coach) was the defensive back and I had to get away from him.  Charlie threw perfect, I was more concerned where Royal was than the ball.  I took my eye off the ball. . . Had I known Royal actually fell down . . . it was a sure touchdown.”

During the first nine minutes of the second half, nothing much happened.  Then, with the ball near midfield, Oklahoma halfback Darrell Royal threw long for end Frankie Anderson who was finally tackled by Johnny Clements at the Carolina 10.  Ironically, this would be Oklahoma’s only pass completion of the game.  Two plays later, the Sooners scored at the 9:40 mark of the third quarter.  The remainder of the game became a punting duel between Justice and Royal…a duel that Justice won easily with punts of 65, 65, 57, and 53 yards.


With two minutes left in the game, Hugh Morton turned his camera toward the Carolina bench.  His remarkable picture of a dejected Charlie Justice tells the story of the entire afternoon. The picture has been reproduced numerous times over the years.


Following the game, both head coaches weighed in on the proceedings.  Oklahoma Coach Bud Wilkinson said, “There is no question that Charlie Justice is great.  He was the player we feared the most and he showed that he is a great back.” Carolina head man Carl Snavely said, “Oklahoma had a big, fine, rugged team and played smartly.”
High Point Enterprise Sports Editor Bill Currie, writing colorfully in the late edition on January 1st said, “Errors in execution, judgment, and strategy on the part of the North Carolina Tar Heels helped the rapacious red-jersied hoard of Oklahoma Sooners to a 14-6 victory in the 15th annual Sugar Bowl game here today . . . .”
After all the interviews were completed, the weary UNC Tar Heels made their way slowly to their locker room as darkness fell on Tulane Stadium.  Justice took the defeat hard: once in the dressing room, he sat in the corner with a blanket over his head and cried.  That picture of the Tar Heel hero turned up in the 1949 University of Oklahoma Yearbook, “Sooner.” The caption: “Grief-stricken . . . Charlie Justice . . . .”
About ten minutes later, he looked up and told the reporters who had gathered around him, “Well, I threw that one away. I gave them that first touchdown with that bad pass.  You can say that.”
The Carolina players took their time in getting dressed, hoping the upset sting would go away.  There was a post-game party scheduled but nobody was really in a party mood. Finally, long after the Oklahoma team had left, the Tar Heels came outside to a dark, deserted parking lot. The busses that had been scheduled to take the Tar Heels back to the hotel had mistakenly taken the Sooners.  Then when the Oklahoma busses arrived and the drivers learned that their victorious Sooners had already left, they too left.
After a futile search, coach Snavely along with his assistants flagged down a passing truck.  The team stood in the open back end as the driver headed toward the hotel.  As the truck got close to the St Charles Hotel, the driver told Snavely, “Ya’ll have to get off a couple of blocks from the hotel.  I’m not allowed to drive to the entrance.”
So, in the New Orleans darkness, UNC’s 1948 Tar Heels slipped in a hotel side entrance unnoticed, and showing the good sportsmanship that Coach Snavely demanded of his players, celebrated with their Sugar Bowl opponent. Viewing Hugh Morton’s photographs from the celebration in the Greensboro and High Point papers, it’s hard to tell who won and who lost.

At 4:15 on January 4th, the majority of the Tar Heel team landed at Raleigh-Durham Airport and boarded busses for Chapel Hill. Two weeks later, Athletic Director Bob Fetzer received a check for Carolina’s participation in the 1949 Sugar Bowl, a check for $103,081.48.