“Are you familiar with the photographer, Hugh Morton?”

Bob Anthony, Curator of the North Carolina Collection posed this question to me early in the process of being interviewed for the collection’s Photographic Archivist in mid December 2002.  I don’t recall my exact answer, but it was an interview-appropriate, “No.” On my return home after the interview, I carried with me a copy of the booklet Sixty Years With a Camera. And now, after eighteen years in the position, I can happily answer that question, “Yes, very much so.” And yet, there is still so much to learn.

Unlike Jack Hilliard, I never had a chance to develop a friendship with Hugh Morton. I did meet him briefly twice: the first time was in the Pleasants Family Assembly Room in Wilson Library prior to an exhibition opening in the North Carolina Gallery coinciding with the publication of Hugh Morton’s North Carolina in October 2003; the second was on Grandfather Mountain near the Mile High Swinging Bridge in May 2004 when I was a participant on the Tar Heel Bus Tour. At least my two encounters were on grounds sacred to Morton: UNC and GFM. (Unfortunately, the digital photographs I made during the bus tour became corrupted several years ago and I can no longer open them.) 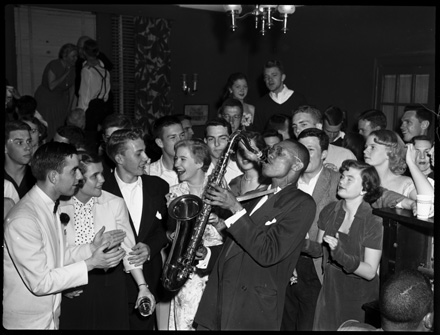 I’ve been watching Ken Burns’s television documentary series Jazz the past several weeks.  I missed the series the first time it aired in 2001, so its all new to me despite being twenty years old.  I would have loved to have lived during the music’s evolutionary years! Instead, I have come to love jazz through recordings and documentaries. I can still remember where I was the first time I heard Billie Holiday’s voice more than three decades ago.

Equally, I would have loved knowing Hugh Morton during the 1930s and 1940s, experiencing the music and photographing the concerts. I would have gladly skipped the World War II years, but the post-war period through 1960 or so has become my favorite period of Morton’s photography.  Much like Morton, a lot of my own photographs are the result of wandering the countryside with cameras in the back of my car. Instead, I have come to known Morton through his photography, my research and writing about it, and through the design and production of the “uncommon retrospective” exhibition.

Curatorship and historical writing require objectivity, but luckily, I’ve been able to develop a “virtual friendship” with Morton by exploring and investigating his photographs and negatives, and by sharing those experiences with those who regularly read or have chance encounters with A View to Hugh.  The opportunity to do so is a cherished gift, one worth remembering on Morton’s 100th.

One thought on “Stephen and Hugh”