The year 2008 marks the 200th anniversary of the birth of Andrew Johnson, one of three U.S. presidents whom North Carolina claims as a native son. Born in Raleigh on December 29, 1808, Johnson was bound for several years as an apprentice to a local tailor. He left Raleigh while still a teenager and relocated to Greeneville, Tennessee, where he soon established his own clothing shop.

Many references pertaining to Johnson are preserved in the North Carolina Collection. 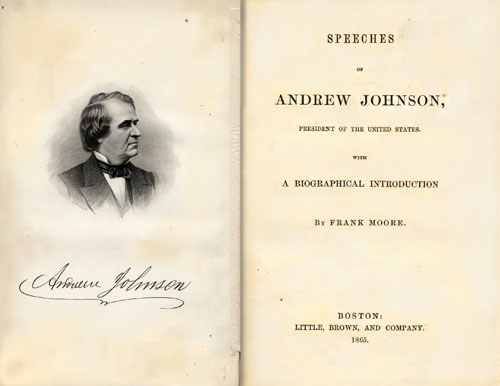 Our earliest book about him is the scarce 1865 edition Speeches of Andrew Johnson. Compiled by New York journalist Frank Moore and released in the months after Lincoln’s assassination, this volume contains a selection of Johnson’s speeches spanning the period between August 1848 and the end of April 1865. The book’s introductory section also provides a forty-eight-page biography on the seventeenth president.