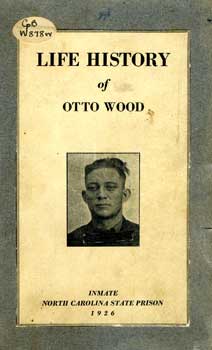 Wood, who had been in and out of jails since he was seven years old and was infamous for his numerous (successful) escape attempts, wrote his life history while serving a thirty-year sentence for killing a man in a pawnshop robbery in 1923. He thought that the book would help “some fallen mortal to a higher life.” Well, it may have helped others to a higher life, but it sure didn’t help him. Over the next four years he escaped from Central Prison, was wounded and arrested again during an attempted burglary in Indiana, returned to Central Prison, escaped again, and was finally killed on December 31, 1930, in a shootout with police in Salisbury.

I can’t wait to hear the ballad.