We recently uploaded the above postcard to the North Carolina Postcards website.  The card is titled, “Start of Hunt, Goosewing Club, Manteo, N.C.,” and shows a partial view of a hunting lodge and two men on a cart getting ready to head out for the day’s hunt.  This is the only image of the Goosewing Club in the Durwood Barber Collection of North Carolina Postcards, and I was curious to find out more about this group.

The Southern Historical Collection holds some of the Goose Wing Club Records (3951-z) from 1931 and 1933, which detail the group’s by-laws and meeting minutes.  The Goosewing Club was incorporated in New York in 1931 in order to purchase and develop land in North Carolina for hunting, fishing, and other forms of recreation.  The group chose two locations in North Carolina that we know of – they purchased 1,440 acres of land on Bodie Island, Dare County, in 1931, and in 1933 they purchased 46.9 acres at the Skyco Lodge in Nag’s Head.

According to Article III of the group’s 1931 By-Laws, the initiation fee for annual members was $2,272.73 with annual dues set at $150, making it quite an expensive (and by extension, exclusive) club to join.  I was unable to find any information as to whether the Goosewing Club is still active, and if not, when they disbanded. 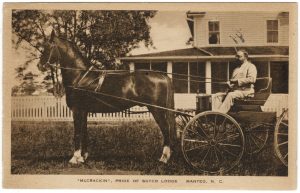 This postcard from the Skyco Lodge is dated ca. 1928, which predates the Goosewing Club’s ownership of the property.  It is possible, however, that the building behind the horse and cart is the lodge on the land they purchased in 1933.

The County Collection (P3) in the North Carolina Collection’s Photographic Archives had several negative images of the Goosewing Club in Manteo, Dare County.  One of the negatives appears to be what the “Start of Hunt” postcard was printed from.  Below are a few selected images that provide a clearer sense of what the land and lodge looked like in the 1930s. 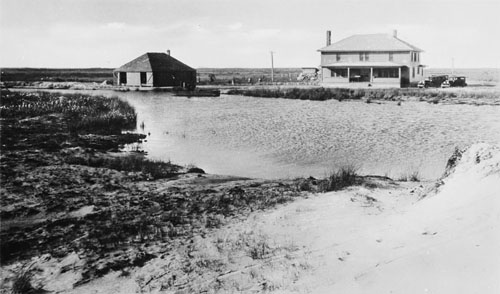 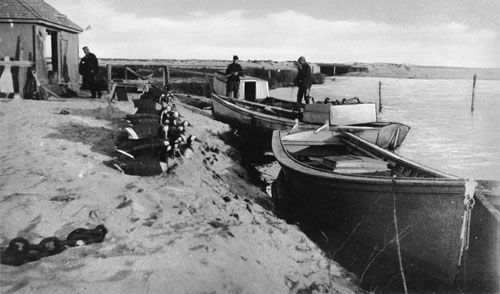 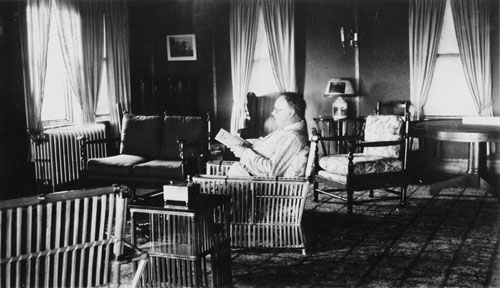