A while back we uploaded this WWI postcard printed by the Raleigh Canteen Red Cross Service to the North Carolina Postcards website.  I love that it shows distances to other military camps and cities radiating out from Raleigh – including Camp Grant in my home town of Chicago, IL, approximately 1500 miles from Raleigh.

There are several other map postcards in our digital collection, and you can view them here, including another WWI map postcard, here.

This Friday, The Hangover opens in theaters.  The movie’s cast features several hilarious actors, including one comedian with a North Carolina pedigree.  Zach Galifianakis, who plays the role of Alan, grew up in western North Carolina and later attended NC State, but didn’t graduate after failing his last college course by a single point.  He moved to New York City where he began his career in comedy and acting.

Two other interesting (and appropriately miscellaneous) facts about Zach Galifianakis:

Zach’s uncle, Nick Galifianakis, ran against Senator Jesse Helms in 1972.  The image below is of Nick Galifiniakis’ campaign buttons, which cleverly spread his long last name over two buttons in a not-so-subtle response to the Helms’ campaign slogan “Jesse Helms:  He’s one of us.” 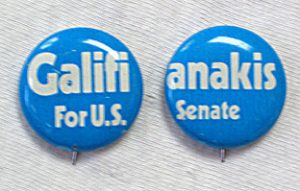 And in 2007, Zach directed and starred in an alternate music video for Kanye West’s song “Can’t Tell Me Nothing,” which was filmed in North Carolina on Galifianakis’ farm.