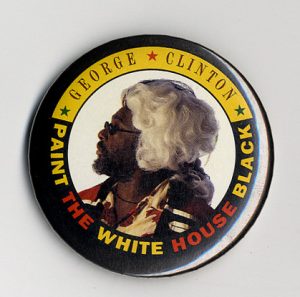 “When talk turns to great musicians born or raised in the Carolinas, a name that rarely comes up is George Clinton, the godfather of funk and architect of today’s rock and hip-hop.

“To be sure, Clinton, who was born in Kannapolis [on July 22, 1941], didn’t begin blending doo-wop and rock with his early band the Parliaments until his family moved to New Jersey…. But Clinton’s childhood in this gospel-rich area of North Carolina surely had an effect on the music that was playing in his impressive brain — at least as much of an effect as the Carolina in James Taylor’s mind.”