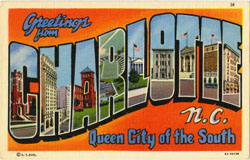 The J. Murrey Atkins Library at UNC-Charlotte has a nice new digital collections site at http://digitalcollections.uncc.edu/.

The site contains images from local photographers, aerial photos of Charlotte, and a fantastic collection of Charlotte area postcards. Where else can you find more than 50 different images related to the Mecklenburg Declaration of Independence? 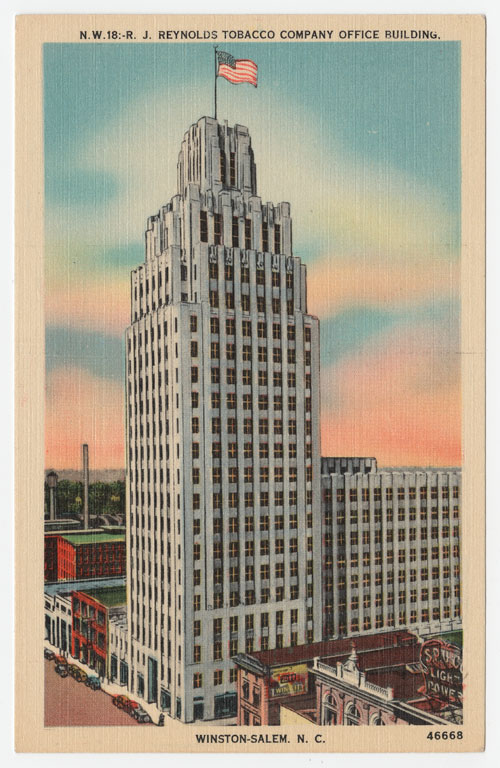 Winston-Salem’s Art Deco landmark is still on the market. But a spokesman for R.J. Reynolds Tobacco says the building is attracting interest from potential buyers.

Its sky-high cafeteria sure did churn out a tasty and inexpensive lunch back in the early 90s. More than a few Winston-Salem Journal employees filled their bellies there (this writer included).

In 1819 Thomas Jefferson, retired at Monticello, wrote Sen. Nathaniel Macon of North Carolina that “I read no newspaper now but Ritchie’s, and in that chiefly the advertisements, for they contain the only truths to be relied on in a newspaper. I feel a much greater interest in knowing what has passed two or three thousand years ago, than in what is now passing.” (from “The Writings of Thomas Jefferson,” Volume 15)

For 41 years Thomas Ritchie was the influential editor and publisher of the thrice-weekly Richmond Enquirer. On another occasion Jefferson referred to the Enquirer as “the best that is published or ever has been published in America.”

Despite his disappointment with newspapers and his preference for books, Jefferson was an unwavering advocate of journalistic freedom. “The only security of all is in a free press,” he wrote Lafayette in 1823. “The force of public opinion cannot be resisted when permitted freely to be expressed. The agitation it produces must be submitted to. It is necessary, to keep the waters pure.”