No matter what the economic climate, work-study programs have historically helped students attend UNC. Clyde Morris Roberts of Marshall, North Carolina graduated with a degree in education in 1931 after having worked as a Student Salesman with the Delineator College Scholarship Plan. The Gallery recently received some items belonging to Roberts, including the September Artifact of the Month: a 9.5″ x 5″ leather billfold embossed with the word “Delineator” on the front that contains a certificate noting Roberts’ status as a Student Salesman.

The Delineator was a women’s magazine published by the Butterick Publishing Company between 1873 and 1937. The magazine contained sewing patterns of the latest fashions as well as short stories. Frank Baum, author of The Wizard of Oz, published a series of short stories known as the Animal Fairy Tales in the Delineator in 1905.

While at UNC, Roberts sold subscriptions of the Delineator to earn his tuition. The 1930-1931 University of North Carolina Catalogue lists the total cost of tuition and fees per quarter for North Carolina residents as $49.66. The above June 1931 issue of the Delineator sold for 10¢. A subscription likely cost less than $1.20. It’s unclear how much Roberts earned from selling a subscription or how the scholarship program worked.

Another item that the Gallery received from Roberts’ time at UNC is an embossed leather 25″ x 12.5″ Carolina pennant. 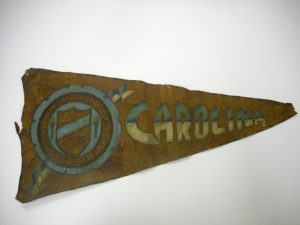