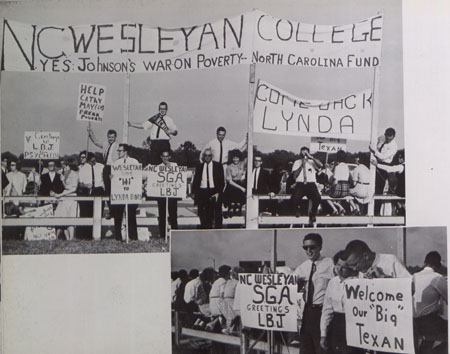 Looking through the collection of yearbooks from North Carolina Wesleyan College that were recently digitized by the North Carolina Digital Heritage Center, I was interested in this photo, which shows a group of students welcoming President Lyndon Johnson to Rocky Mount in 1964, the visit that resulted in the now iconic photos of the President and Governor Terry Sanford sitting with a local family on the front steps of their rural home. (There’s a nice recap of the visit on the N&O website).

One of the larger signs in this photo says “Come Back Lynda.” I assume that’s referring to the President’s daughter, Lynda Bird Johnson. Why are they asking her to come back? Did she have a connection to Rocky Mount, or to North Carolina?

Earlier this week I recalled some favorite quotes from North Carolina legislators. A few more dug from the same drawer:

“A good day’s pay for a decent salary — I believe in that.”

“You ever had a chigger on you? After they’re gone, you kind of miss the scratching?”

“Still first in hams, second in yams and last in the SATs.”

“A scrooge on our environment.”

“Next Day, about 10 a Clock, we struck out of the Way, by the Advice of our Old Indian. We had not gone past two Miles, e’er we met with about 500 Tuskeruros in one Hunting-Quarter. They had made themselves Streets of Houses, built with Pine-Bark, not with round Tops, as they commonly use, but Ridge-Fashion, after the manner of most other Indians. We got nothing amongst them but Corn, Flesh being not plentiful, by reason of the great Number of their People. For tho’ they are expert Hunters, yet they are too populous for one Range; which makes Venison very scarce to what it is amongst other Indians, that are fewer; no Savages living so well for Plenty, as those near the Sea.”

-John Lawson describing one of his first encounters with the Tuscarora Indians in A New Voyage to Carolina.

Lawson did not fare well in a later meeting with the Tuscarora. He and Baron Christoph von Graffenreid were captured and held prisoner by the Indians during a trip up the Neuse to discover its source. Von Graffenreid was eventually released by the Tuscarora, who believed he was the governor. Lawson was killed, reportedly on this date 300 years ago.