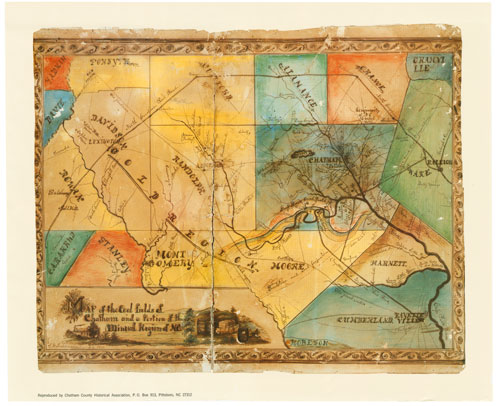 This map depicting the coal fields of Chatham County and other mineral deposits in 1874 is the most recent addition to our North Carolina Maps online collection. It seemed as good a map as any to remind you that we’re still adding to the site. We’re now up to 3,395 maps.

We’re proud of the collection. And we’re particularly proud these days. On Friday North Carolina Maps was honored with a 2011 Award of Merit from the American Association for State and Local History. We’re pleased with the recognition. Although, truthfully, the most important acknowledgment comes from the many folks who’ve written to tell us about how they’ve used the maps from our site. Keep those cards, letters and emails coming.

Generations of historians have labored to nail down the origin of “Tar Heel.” Less attention has been paid the alteration — shrinkage? corruption? —  of the term’s perceived meaning.

Most North Carolinians seem to have accepted the nickname, with varying degrees of enthusiasm, until mid-20th century — somewhere between the University of North Carolina’s redefining itself as a multicampus institution (1931) and Castleman D. Chesley’s introducing TV coverage of ACC basketball (1957).

Today the question “Are you a Tar Heel?” is likely to be met not by, say, “Born in Smithfield, live in Raleigh” but by “No, I went to State” or “I pull for the Deacons” or “Like hell, I’m a Duke fan.”

Have I got this right? And does anybody else see it as a loss to the vernacular?