A recent addition to the North Carolina Collection Gallery’s numismatic collection tells a lesser-known story related to American independence. That $7.50 note is our January Artifact of the Month. 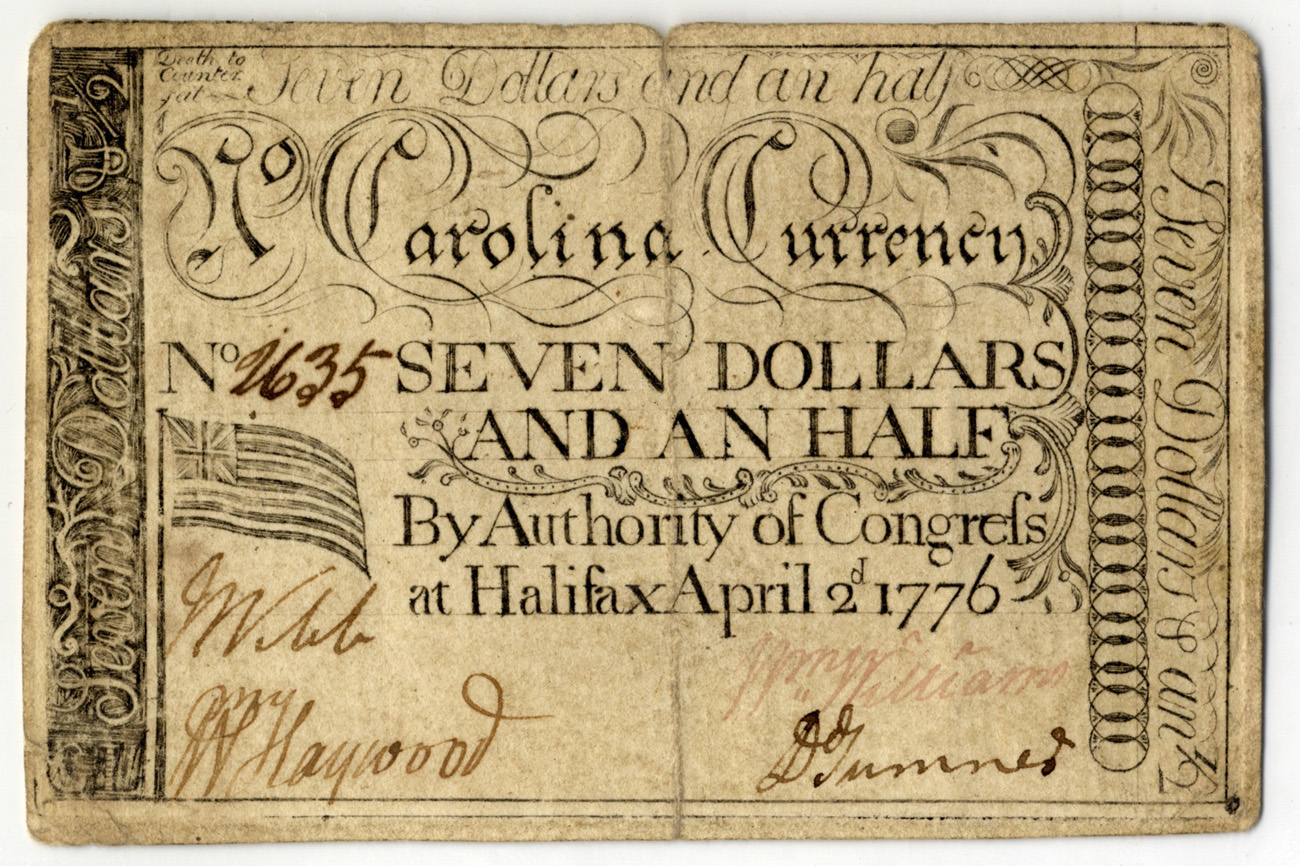 North Carolinians asserted their independence from British rule at the Fourth Provincial Congress in a session convened at Halifax starting April 4, 1776. The first North Carolina battle of the war had occurred that February at Moore’s Creek Bridge, where North Carolina troops led by Richard Caswell defeated a Loyalist force.

Independence was on the minds of the legislators, who called for a declaration of independence and the right to create a constitution. The Halifax Resolves passed unanimously on April 12. This action influenced other colonies to adopt similar resolutions, and together these actions led to the Declaration of Independence. (If the April 12 date is ringing distant bells, it’s because you’ve seen it on the current North Carolina state flag.)

That same session of the Provincial Congress led to a lesser-known assertion of independence. North Carolina, along with the other colonies, had long issued paper money. Massachusetts was the first colony to do so in 1690. North Carolina followed in 1712, the first of twenty-five 18th-century issues, the last in 1785. The 1776 session of the Provincial Congress authorized perhaps the most interesting of all the issues.

That issue is significant for several reasons. A total of seventeen different denominations were authorized, from 1/16 dollar through twenty dollars. (Aside: Bonus points to any Miscellany reader who can tell us in the comments why 1/16 of a dollar was used as a denomination.)

The denominations were issued in 56 different varieties with some denominations having as many as eight designs. The legislation specified neither the number of varieties nor the designs themselves, and it is unknown how these decisions were made.

Each note design displays a vignette, or illustration, usually of an animal, sometimes a plant. One even shows a cupid. But one design, the sole example of the 7 ½ dollar denomination, displays an unfurled flag.

Adopted by the Continental Congress in 1775, the Grand Union flag is usually considered the first American flag. It is also known as the Continental Colours, the Congress Flag, the Cambridge Flag, and the First Navy Ensign. The flag displays the familiar thirteen stripes but the canton features the British Union Jack flag. In 1777, thirteen stars replaced the Union Jack, and the Grand Union became our historic first flag.

First Lieutenant John Paul Jones hoisted the Grand Union flag over the USS Alfred in February 1776. This was the first appearance of an American flag on a naval ship. It is believed that the same flag was raised by George Washington on New Year’s Day, 1776, at Prospect Hill, now part of Somerville, Massachusetts. Today, you might see the Grand Union flying over the Capitol in Colonial Williamsburg, Virginia.

“The Story of the American Flag” in the October 1917 issue of National Geographic claims that the image on the North Carolina note is the “earliest perfect representation of the Grand Union ensign.”

Many examples of the note have survived, probably because of its odd denomination and the flag illustration. We were excited to add one of these proud patriotic notes to our numismatic collection. For North Carolina collectors, the vignette of the flag gives it special historical meaning and a bold statement of early patriotism.

7 thoughts on “Artifact of the Month: 1776 note issued by the Fourth Provincial Congress”