“On the same day the U.S. Treasury announced Andrew Jackson’s image would be removed from the front of the $20 bill, Congress moved a step closer toward declaring [James K.] Polk‘s Tennessee home a national treasure.

“A bill that passed the U.S. Senate contains a provision directing the Interior Secretary to study the feasibility of preserving the 11th president’s home in Columbia, just southwest of Nashville, as part of the national park system.

“The two-story brick structure, built in 1816 by Polk’s father while the future president was attending the University of North Carolina, is where Polk returned after graduation and where he began his legal and political career. The house contains more than 1,300 objects and original items from Polk’s years in Tennessee and Washington, including furniture, White House artifacts and political memorabilia.”

Considerably less well situated is the site of Polk’s 1795 birth in Mecklenburg County, which in recent years has endured trial by both fire and legislature.

It’s springtime and herbs are plentiful.  Why not use those herb gardens to make something tasty.

Basil Butter from The Fearrington House cookbook : a celebration of food, flowers, and herbs. 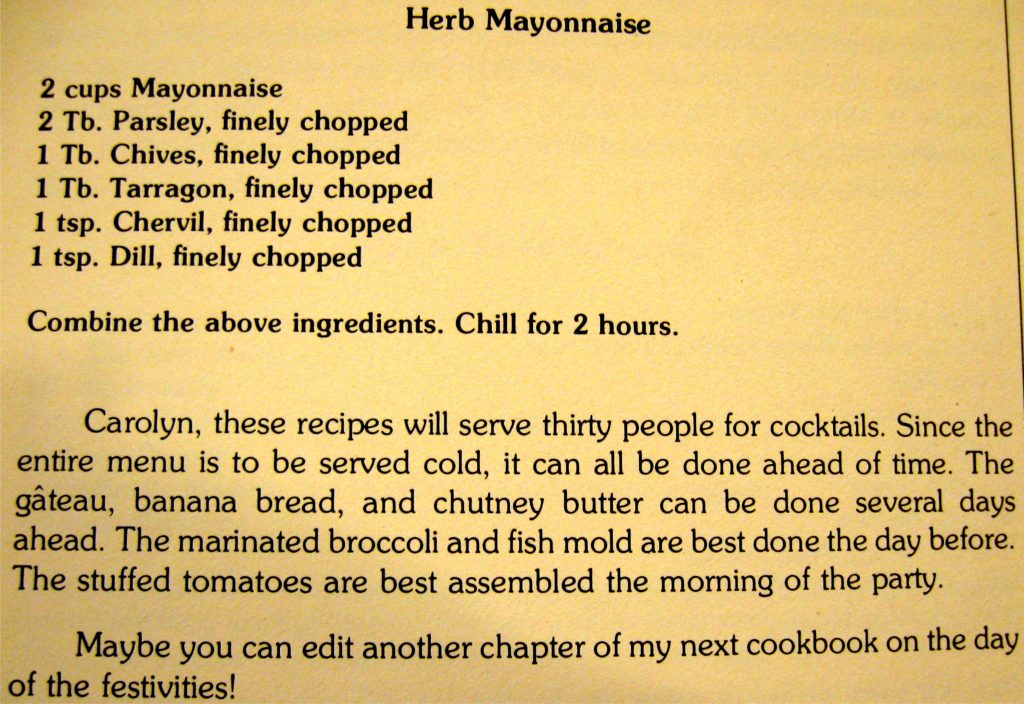 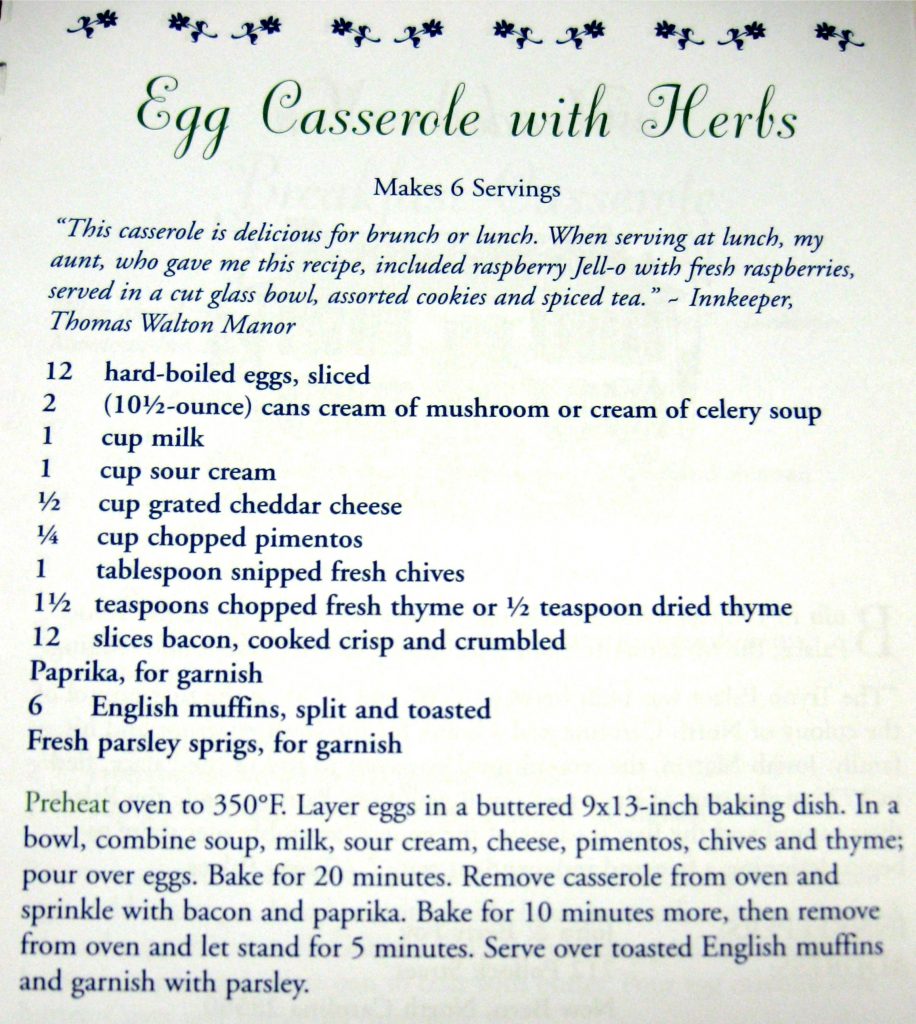 A Quick Guide to Herb Use from Waldensian cookery. 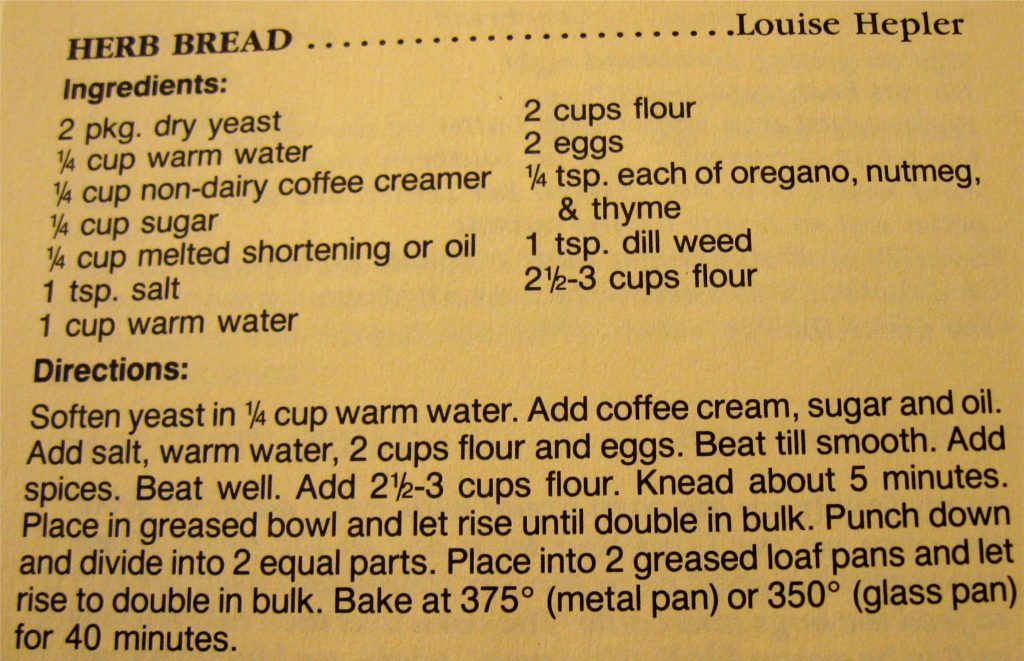 “My grandfather ate the Charlotte Observer. Regularly. The entire paper. I’m not making this up….”

— From “Here’s one way to eat newsprint” by Walter Dellinger (letter to the editor of the Washington Post, April 8)

“This winter, amid the news of the FBI’s arrest of the remaining occupiers of a national wildlife refuge in Oregon, another story unfolded more quietly in the Appalachians. At the heart of it were a small plant that plays a significant role in eastern mountain forests — American ginseng — and Billy Joe Hurley, a North Carolina man who had just been released from prison for stealing ginseng plants from Great Smoky Mountains National Park.
“Hurley, 47, has been convicted at least five times, stretching back nearly two decades. While ordinarily such a case would be the stuff of the local paper’s police blotter, Hurley’s malfeasance is unusual, garnering national coverage, both because American ginseng roots fetch high prices in Asian markets – hundreds of dollars a pound — and the oddity of a plant heist resulting in a [six-month] prison sentence….

“The history of the park and its creation in the 1930s still stings for some who feel their grandparents were swindled out of their land through eminent domain to establish what is now America’s most visited park…. A few descendants today use that grudge to justify taking ginseng from the park. But for most, like Hurley, ‘ginsenging,’ is a tradition handed down one generation to the next.”

— From “The Fight Against Ginseng Poaching in the Great Smoky Mountains” by David A. Taylor in the Smithsonian (April 21)

Meanwhile, the other side of the state is confronting its own plant poaching problem.

This month’s Artifact of the Month post illustrates our continuing fascination with objects related to tobacco marketing. (For prior evidence of this obsession, see posts about the Seal of North Carolina Plug Cut tobacco pouch, the Joe Camel holiday lighter, and the Duke Cigarettes tobacco cards.)

Our April Artifact is a bumper sticker for the Winston Rodeo, circa 1975. That’s Winston as in the cigarette brand, owned by the R.J. Reynolds Tobacco Company.

The Winston Rodeo series began in 1971 or 1972 (depending on which source you consult). It originally included roughly 600 rodeos each year throughout the country.

An intriguing 2010 article in the American Journal of Public Health analyzes internal tobacco industry documents to reveal the motivations behind tobacco company rodeo sponsorship. Not surprisingly, the goal was the promotion of cigarettes — not rodeo.

The researchers conclude that it was no coincidence that the advent of Winston’s rodeo sponsorship coincided with the 1971 ban on cigarette advertising on television and radio. During a televised rodeo event, TV cameras can pick up branded banners, scoreboards, and clothing, such as the jacket worn by a cowgirl in two photographs that came to the North Carolina Collection with the bumper sticker: 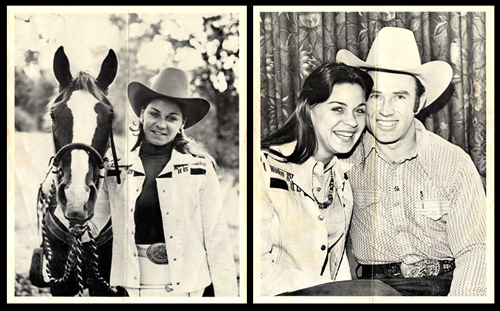 Tucked under the collar on each shoulder is the embroidered slogan “Winston: How Good it Is.”

If you find that kind of branding too subtle, then take the example of Miss Winston: 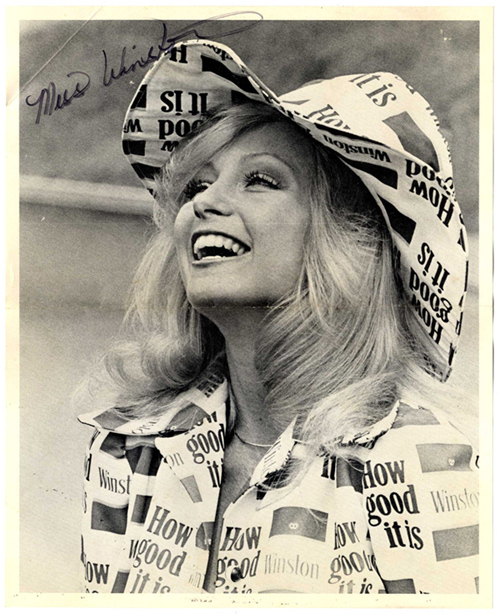 Miss Winston was a spokesmodel for the Winston Cup, a NASCAR racing series that was also sponsored by Winston. Miss Winston presumably made an appearance at the rodeo and autographed this photo for a lucky fan.

In 1975, R.J. Reynolds offered free Winston Rodeo bumper stickers, of which our Artifact is likely an example. Fans who were younger than 21 could skirt the company’s policy against marketing to young people by having their parents sign a statement provided by RJR.

On the back of the bumper sticker Winston advertises a 45 rpm souvenir record, a “Musical Salute to the Professional Rodeo Cowboy.”

A 1979 study commissioned by R.J. Reynolds concluded that Winston’s rodeo sponsorship had its intended effect of increasing purchases among fans. The study found a 10% per-year increase starting in 1974 attributed partially to Winston’s sponsorship of its Rodeo Superstars and College Rodeo Scholarship programs.

We’re grateful to the researchers who sifted through all those tobacco industry documents: Drs Pamela M. Ling, Lawrence A. Haber, and Stefani Wedl.

And we’re grateful to the anonymous rodeo fan who opted not to affix this artifact to his/her bumper. It’s a perfect addition to the NCC Gallery’s collection of tobacco-related objects.

“When I drove into the parking lot of Replacements, Ltd., on the outskirts of Greensboro, North Carolina, I thought of a saying that Rosanne Cash attributes to her father, Johnny, who was an avid collector of rugs, china, linens, and furniture: ‘Every possession is just a stick to beat yourself with.’ There are many, many sticks with which one might beat oneself at Replacements….

“I came to see the huge collection of Fiestaware, the beloved American-made brand of colorful china, and to follow a hunch I had that a plate has special significance in the South. This was both an ethnographic mission for my work as a cultural anthropologist [at Duke] and a personal quest: I am one of countless Americans who collect Fiestaware. Nietzsche would describe me as an ‘antiquarian,’ or someone who believes that the past ‘belongs to the preserving and revering soul — to him who with loyalty and love looks back on his origins.’ Mostly, I hoped to understand the pull in my gut, an embodied sense of longing, I feel every time I see those brightly colored dinner plates….”

Alexander isn’t alone in her fetish. Approaching the vast Fiestaware display at Replacements, her guide warned that “One woman fainted when she saw this, and another fell to her knees — I saw it happen…. Fiestaware can do that to people.”

This Saturday is National Picnic day so grab a blanket, a basket, and a friend and head out to your favorite picnic spot. 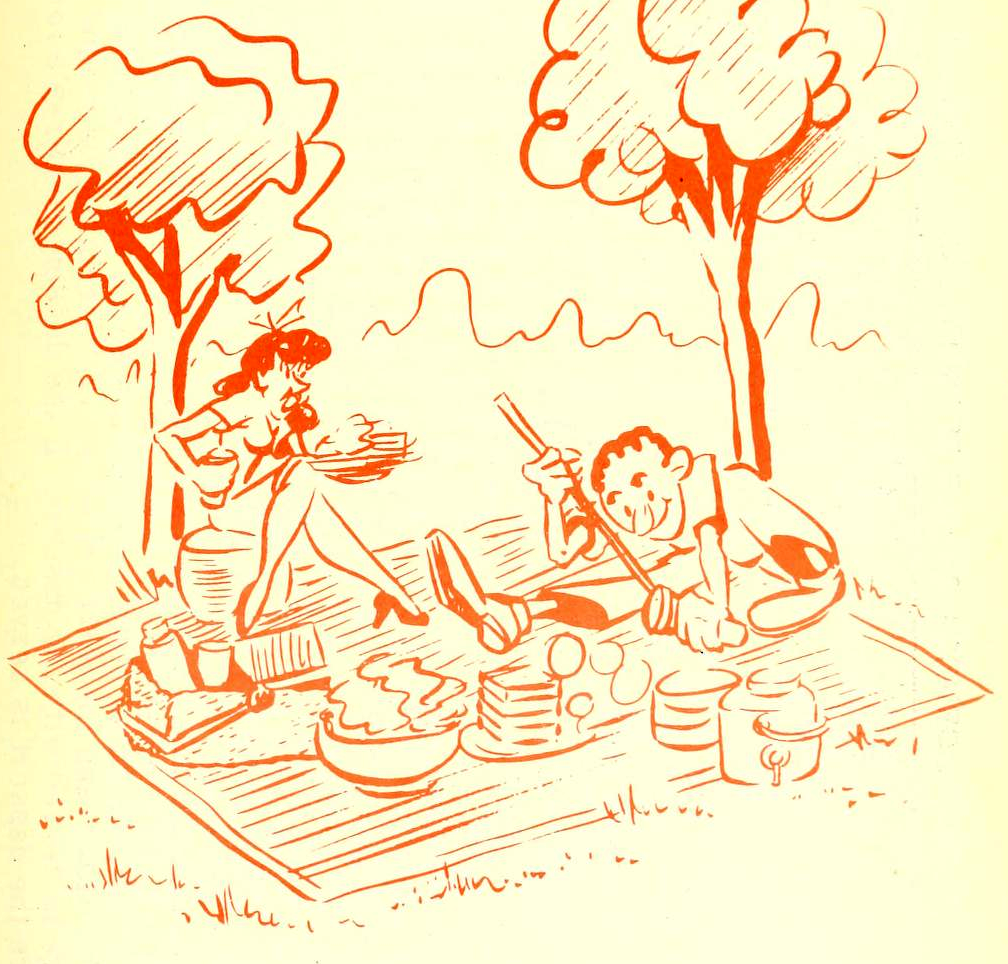 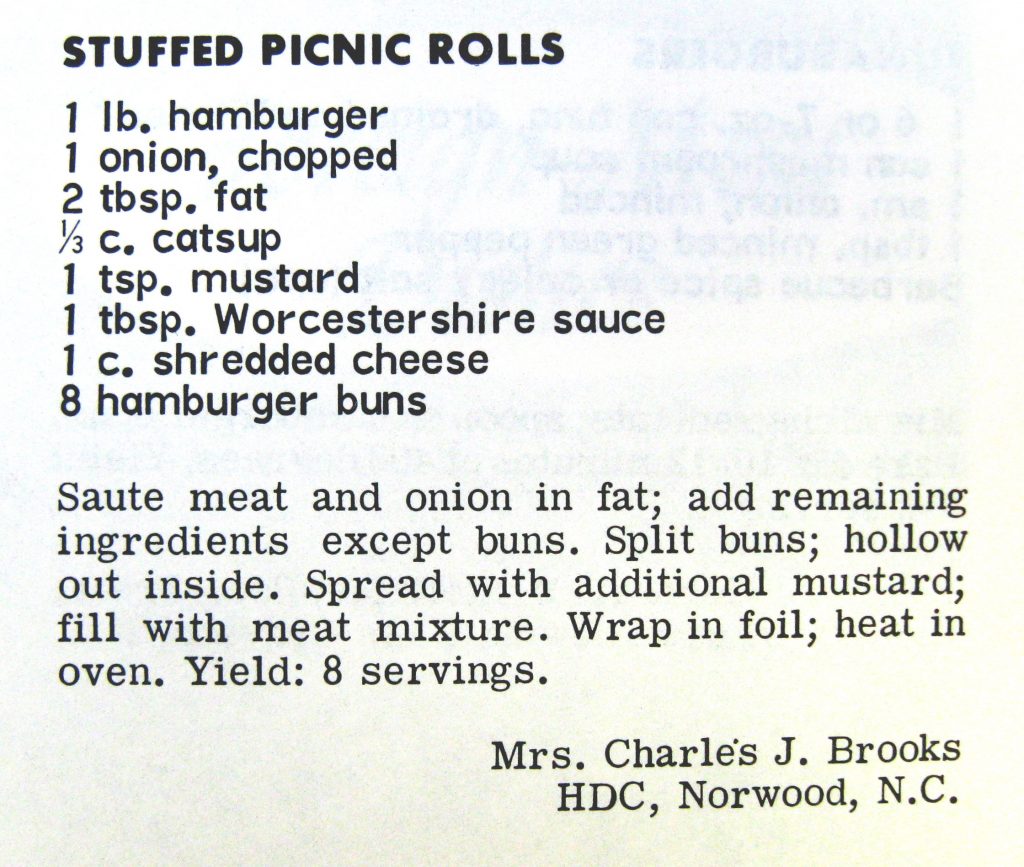 Stuffed Picnic Rolls from Favorite recipes of the Carolinas : meats edition, including poultry and seafood. 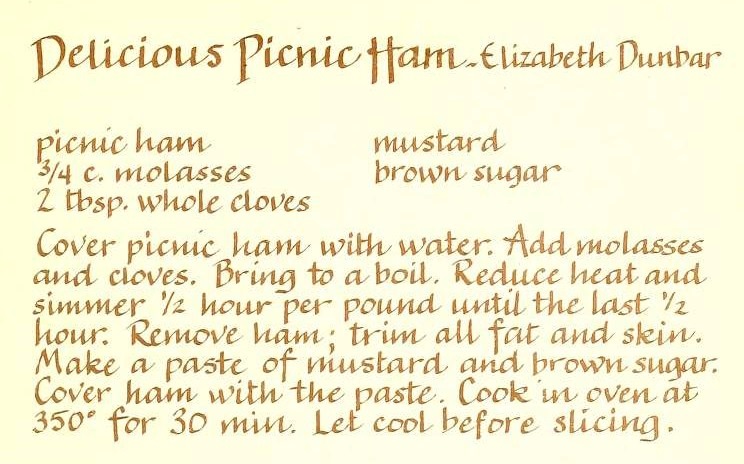 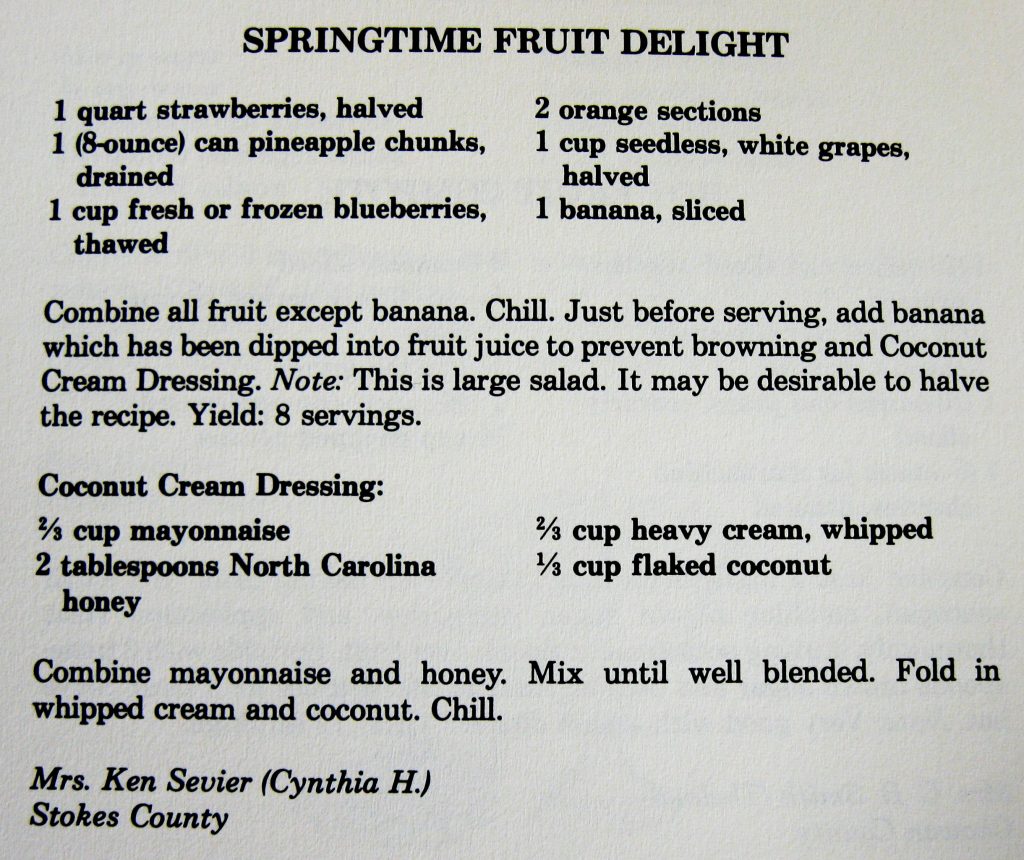 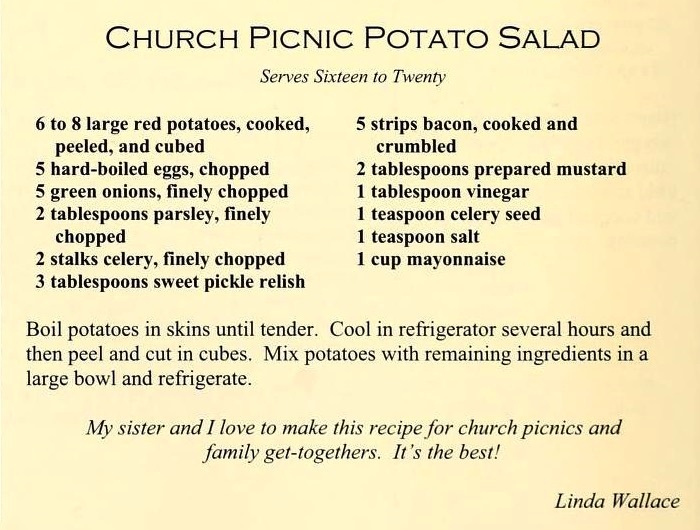 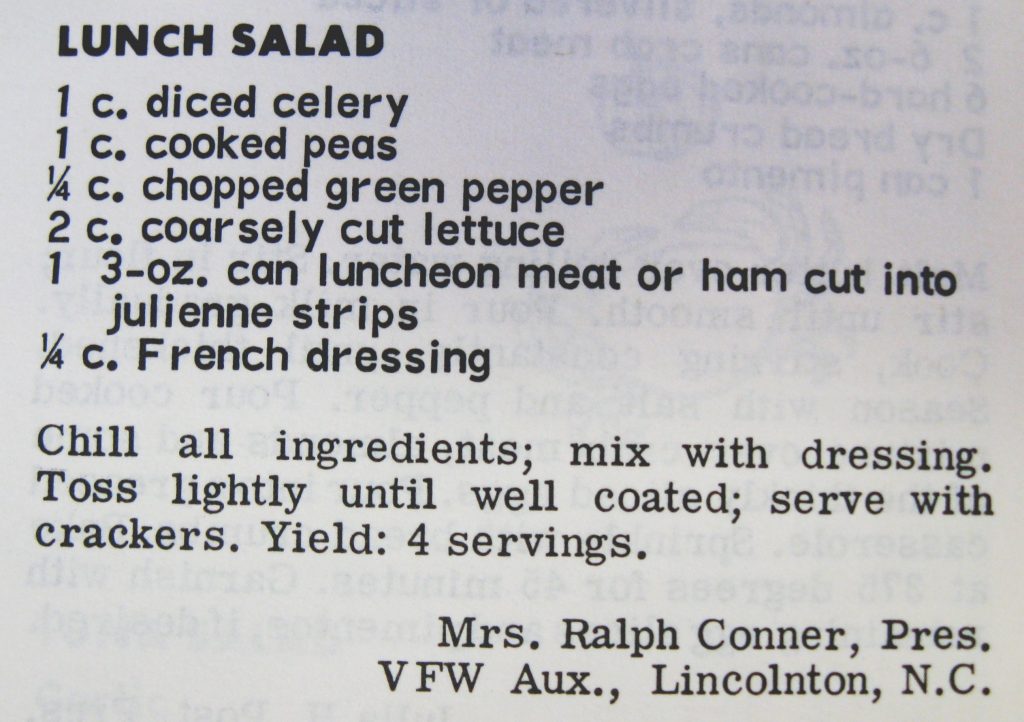 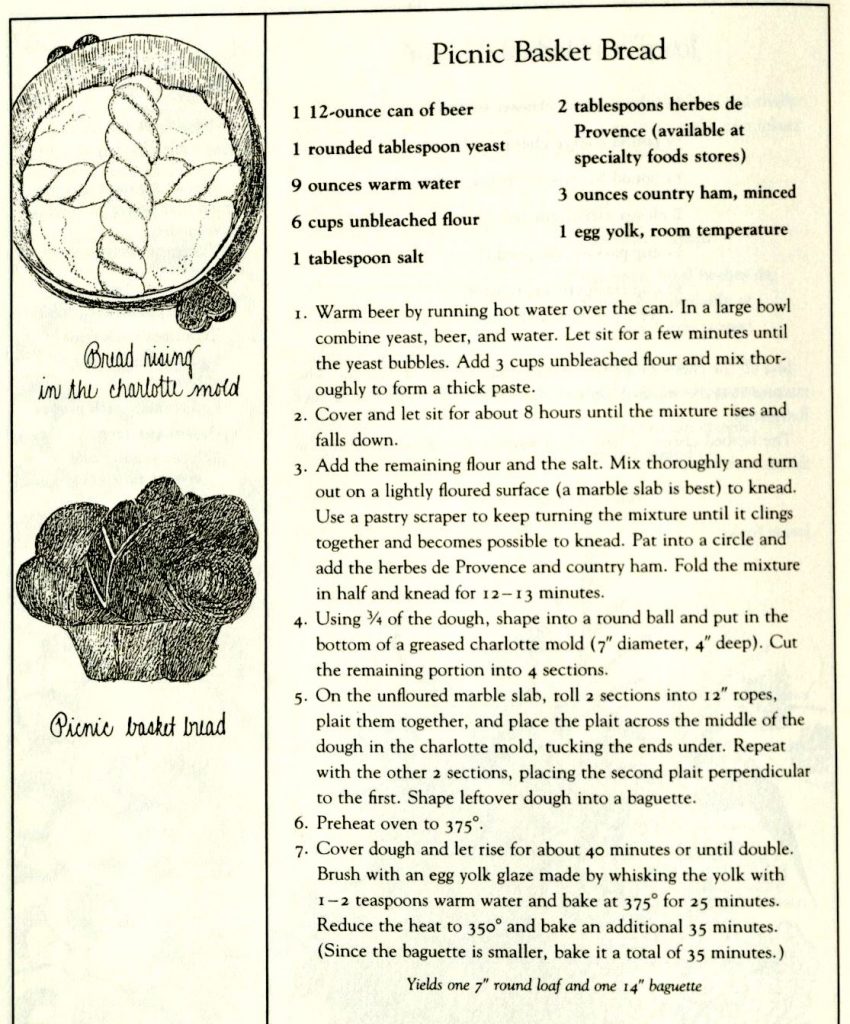 Picnic Basket Bread from The Fearrington House cookbook : a celebration of food, flowers, and herbs.

“P.S. There is a poor, desperate, unhappy man staying at the Grove Park Inn. He is a man of great talent but he is throwing it away on drink and worry over his misfortunes. [Maxwell] Perkins thought if Mama went to see him and talked to him, it might do some good — to tell him that at the age of forty he is at his prime and has nothing to worry about if he will just take hold again and begin to work.

“His name, I forgot to say, is Scott Fitzgerald, and a New York paper has just published a miserable interview with him — it was a lousy trick, a rotten…piece of journalism, going to see a man in that condition, gaining his confidence, and then betraying him. I myself have suffered at the hands of these rats, and I know what they can do. But I don’t know whether it’s a good idea for Mama to see him — in his condition, he might resent it and think we were sorry for him, etc .— so better wait until I write again.”

On Fitzgerald’s 40th birthday two weeks earlier, a reporter from the New York Post had tracked down the drunken author in Asheville and brutally described him under the headline “On the other side of paradise… engulfed in despair.”

Edenton, N. C., Feb. 21 [1943] –(AP) — Banks, traditionally, have frequent holidays, but the employes of the Bank of Edenton are looking forward to a special sort of holiday. Vice President D. M. Warren has tacked up this sign in the bank: ‘We will be closed on the day of Hitler’s funeral. Thank God.’ ”