Our Recent Acquisitions Evening is tomorrow. For the past couple weeks we’ve been featuring recently acquired individual items. This feature shines a light on a notable collection of works we’ve recently acquired. 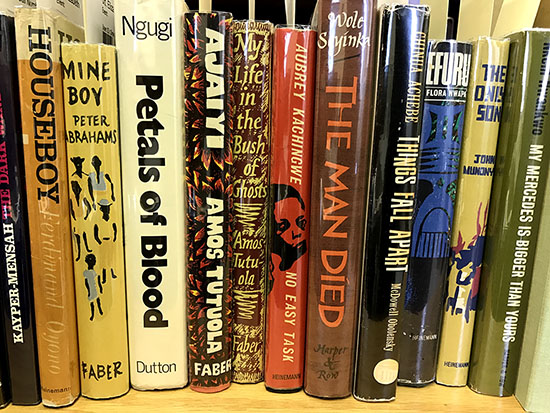 This collection of African post-colonial literature includes works published from the 1950s through the 1980s, primarily titles published in English and French, all by African authors. Most were published in the United States, London, and Paris, with some titles published in countries across Africa including Ghana, Cameroon, and Nigeria.

The three decades beginning in the 1950s found African literature flourishing in a post-colonial moment. African writers took to the pen, telling or retelling stories of African life, often in the languages of the colonial powers who had occupied their nations. Their work had a significant impact on the novel in the West and represented a global turn in literature.

Many of these works have long been read in academic departments at UNC and can be found elsewhere in the library’s collections–but not as preservation copies. The Rare Book Collection has acquired this collection to preserve the artifactual history of these important works, documenting how these works were marketed for a mass audience.

This collection and many other items will be on display at the Rare Book Collection’s Recent Acquisitions Evening, a not-under-glass display of some of the Collection’s notable acquisitions. We hope you’ll join us on March 22 for the unique opportunity to see these remarkable items up close.