Our Recent Acquisitions Evening is tomorrow. Here’s one more fascinating item that will be on display — this one offers an intimate glimpse into the life of a 19th-century woman writer of increasing relevance. 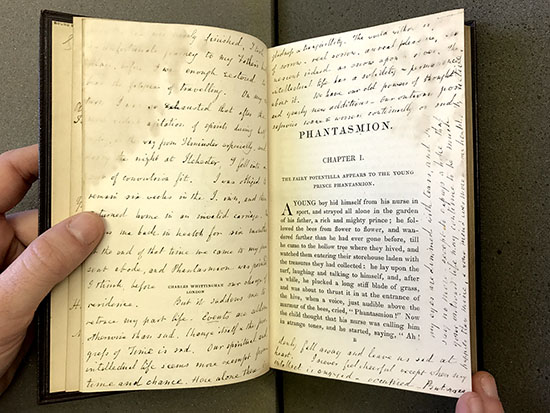 Sara Coleridge was a talented writer and translator whose work is often overshadowed by the biographical fact of her parentage: Her father was literary giant Samuel Taylor Coleridge.

Many critics consider her Phantasmion, first published in 1837, to be an early precursor to the modern fantasy novel. Coleridge’s life has been little studied, though there has been increasing scholarly interest in her since the 2007 publication of many of her poems, the majority of them newly-discovered. 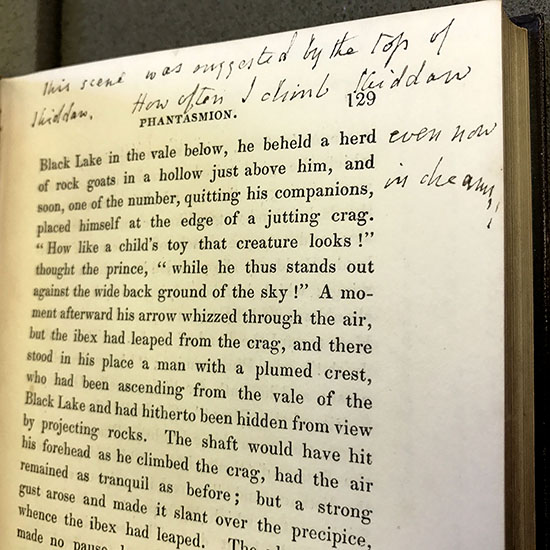 This extensively annotated volume of Phantasmion holds special significance because its vast marginalia was written by Coleridge as a long letter to Aubrey de Vere, an Irish poet who Coleridge formed a close friendship with after the death of her husband. In it, she offers a look into her inner life, including remembrances of growing up in England’s Lake District, the anxieties of growing up with a famous writer for a father, and her experiences as an opium addict. More than just a presentation copy, this book represents a unique record of female authorship, written in Coleridge’s characteristically eloquent style.

See this remarkable volume and more at the Rare Book Collection’s Recent Acquisitions Evening, a not-under-glass display of some of the Collection’s notable acquisitions. We hope you’ll join us on March 22 for the unique opportunity to see these incredible items up close.