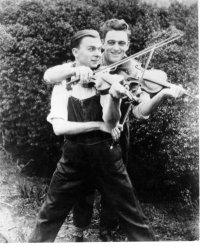 The Southern Folklife Collection (SFC) ranks as one of the nation’s foremost archival resources for the study of American folk music and popular culture. SFC holdings extensively document all forms of southern musical and oral traditions across the entire spectrum of individual and community expressive arts, as well as mainstream media production.

Centered around the John Edwards Memorial Collection, the SFC is especially rich in materials documenting the emergence of old-time, country-western, hillbilly, bluegrass, blues, gospel, Cajun and zydeco musics. There is also extensive documentation of the folk revival movement reflecting the tremendous interest in traditional music that has blossomed since the late 1950s. Photographs, recordings, ephemera, periodicals, and manuscript materials trace the rise of folk and bluegrass festivals in the United States; promote the study of folksong clubs, coffeehouses, fan clubs, and grassroots organizations; and chronicle the output of recording companies.
The SFC contains over 160,000 sound recordings, including cylinders, acetate discs, wire recordings, 78 rpm and 45 rpm discs, LPs, cassettes, CDs, and open reel tapes. Moving image materials include over 3,000 video recordings and 18 million feet of motion picture film. Other materials include thousands of photographs, song folios, posters, manuscript materials, ephemeral items, and research files, as well as an exceptionally strong collection of discographical materials for the 78 rpm era.
Background
Established in 1940, the Curriculum in Folklore at UNC was one of the first graduate programs of its kind in the country. The early faculty included Ralph Steele Boggs, Arthur Palmer Hudson, and Guy B. Johnson, all of whom donated materials that were ultimately placed in the SFC. In 1968, faculty members of the Curriculum in Folklore established the UNC Folklore Archives.
The John Edwards Memorial Foundation was formed in California in 1962 as an archive and research center named for a young Australian record collector. Following Edwards’s untimely death in 1960, his remarkable collection of American country music records, along with a wealth of correspondence and other research materials, was strengthened by additions from his American friends and colleagues, including Eugene Earle, Archie Green, D. K. Wilgus, Ken Griffis, Ed Kahn, and Norm Cohen.
In 1983, UNC purchased the John Edwards Memorial Collection (JEMC), and, in the fall of 1986, the UNC Folklore Archives and the JEMC were combined to form the Southern Folklife Collection, a component of the Manuscripts Department of the UNC-Chapel Hill University Library, which also houses the renowned Southern Historical Collection. The SFC was officially opened for research during the Sounds of the South conference at UNC in April 1989.
Access
SFC materials are non-circulating and may be used on site at the Wilson Library, where there are facilities for listening to recordings and viewing videotapes. Consultation with a staff member is highly recommended. We suggest that you contact the SFC prior to your visit to ensure that listening/viewing copies of the recordings you would like to research are available.
The UNC Chapel Hill Libraries online catalog contains many entries for SFC holdings. Finding aids available online provide limited access to recording titles, artist names, photographs, and subject headings. More extensive searching by SFC staff is possible using in-house databases.
Copying of materials may be limited by copyright, donor restrictions, or the condition of the items.

One thought on “About”