Today marks the 90th anniversary of the June 7th, 1929 violence at the Loray Mill Strike in Gastonia, North Carolina. The strike started in April of 1929 with the arrival of the National Textile Workers Union. The workers at the mill began striking for their demands. On June 7th sheriff’s deputies raided tents set up near the mill by striking workers. Violence ensued, and Police Chief Orville Aderholt was killed.
Just a few months after the culmination of the Loray Mill Strike, in September of 1929, Ella May Wiggins, a 29-year-old working mother and strike organizer, was killed by a mob of men trying to run the strikers out of town. The union was preparing for a large rally at which Ella May Wiggins would sing her ballads. On the way to the meeting, Ella May and other union members were attacked by anti-strikers. Ella May was one of many mill women and girls who protested the working conditions, hours and little pay in the Gaston County Mills in 1929. Often overlooked, the women working in the mills had a huge impact on the future of labor organizing in the South.

Ella May’s legacy lives on in the protest songs and ballads she wrote and sang. Her most popular protest song is “Mill Mother’s Lament,” a ballad covered by Pete Seeger on the album American Industrial Ballads.


She also penned songs such as “The Big Fat Boss and the Worker” and “Up in Old Loray,” that were sung at union meetings and rallies. Some accounts say that Ella May did not write “Up in Old Loray,” but the lyrics in the Archie Green Collection have Ella May credited as the writer. Handwritten and typed copies of the lyrics to a few of her songs can be found in the Archie Green Papers.


Many of the mill workers that fought for better working conditions during the strikes in 1929 will go unnamed. We are lucky to have Ella May’s songs as a reminder of her spirit and tenacity.
If you are looking to learn even more about Ella May Wiggins, check out The Southern Historical Collection’s oral histories of Ella May’s daughters, Millie Wiggins Wandell and Charlotte Wiggins. These tapes were digitized and are streaming online thanks to our generous grant from the Andrew W. Mellon Foundation. 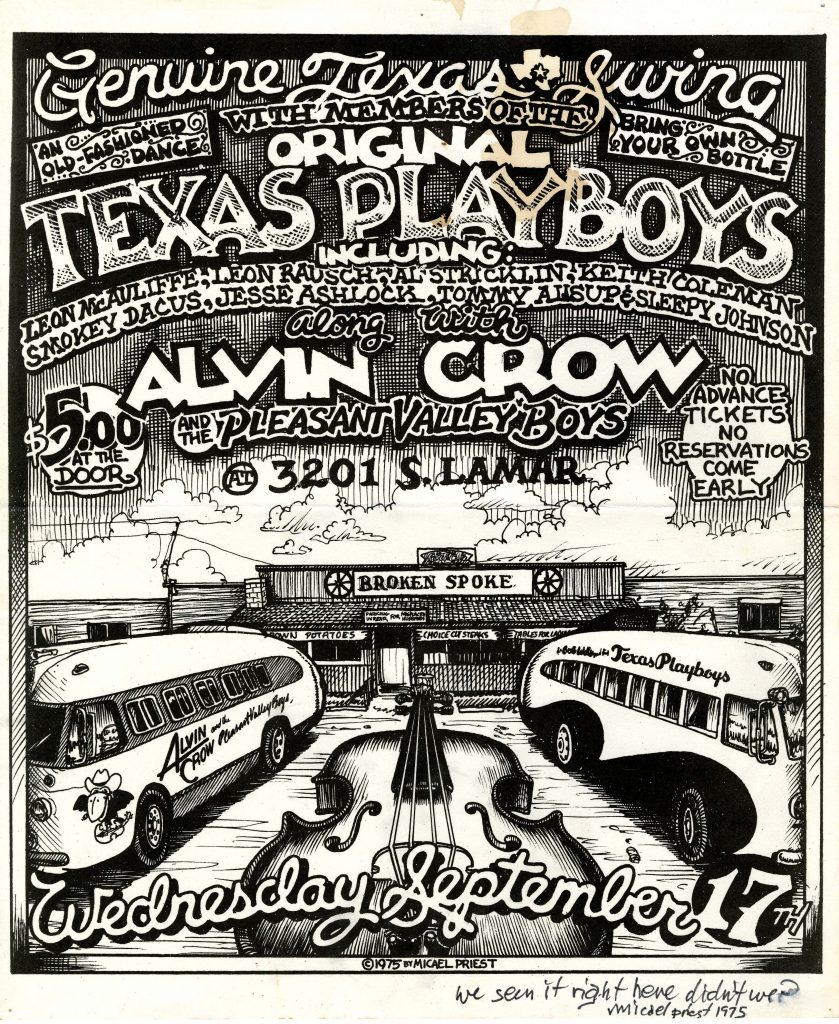 The Southern Folklife Collection is honored to hold a number of collections of individual poster artists including the Ron Liberti Collection (20398), Casey Burns Collection (20415), Jason Lonon Poster Collection (20451), Matt Hart Poster Collection (20457), Steve Oliva Collection (20506), Skillet Gilmore Poster Collection (20468), Clark Blomquist Collection (20465), as well as the work of many other artists represented across the collections, like that of Micael Priest whose work can be found in Folders 3218-3240 in the Archie Green Papers (20002). Priest died yesterday at the age of 66.
Artist Micael Priest moved to Austin, Texas in 1969 and quickly became an active participant in the city’s growing counterculture. As a member of the famed music venue Armadillo World Headquarters’ Art Squad from 1972-1980, he created hundreds of iconic images that document the people, places, and activities of the music scene in the form of posters advertising upcoming shows, AWHQ calendars, advertisements, and record covers. With an instantly recognizable visual style, Priest’s posters distill the spirit of a community and, along with the work of his fellow AWHQ crew Jim Franklin and Kerry Awn, imbues such a strong sense of place that it serves as a simulacrum of an Austin that blurs the real and the remembered until the boundaries seem to disappear.
Folklorist Archie Green recognized the power of Priest’s work while teaching at UT Austin in the mid-1970s. Always an ethnographer, Green collected a number of posters, clippings, recordings and more documenting the “cosmic cowboy” scene at the Armadillo and around the city. In memory of Micael Priest we wanted to share a couple of these.
Below is the now famous poster for Willie Nelson’s first show at the club, August 12, 1972, arguably one of the most significant performances in Nelson’s career that marked his turn away from Nashville and toward his own unique sound. Above is one of my personal favorites featuring Alvin Crow and the Original Texas Playboys at the Broken Spoke. I had the fortune of growing up not 1/2 mile from the Broken Spoke, and despite the best efforts of “New Austin,” I am very glad to report that it’s still there, still honky-tonkin, and the Shiner beer is still cold. Priest’s note handwritten on the bottom of the poster is a prescient comment on the importance of his work and of all poster artists in the historical record. A comment that celebrates the general sense of wonder those cosmic cowboys and post-hippie hipsters must have felt to be able to attend shows like this on a regular basis — singular moments in music history that transcended the commercial drive of the social scene.
“We seen it right here didn’t we?”
Go on easy, Micael Priest. 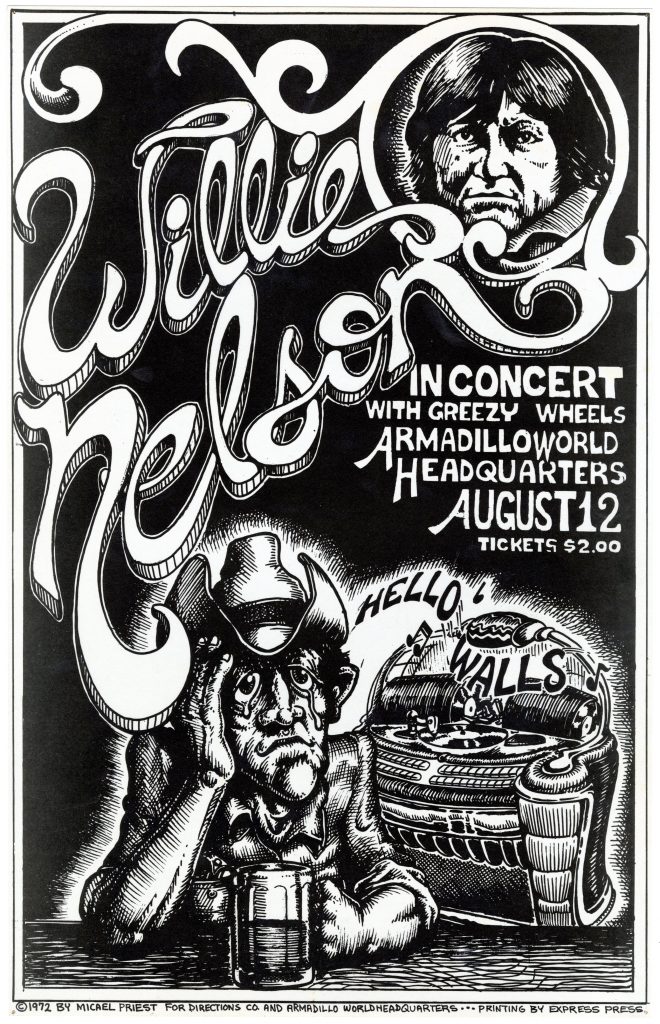 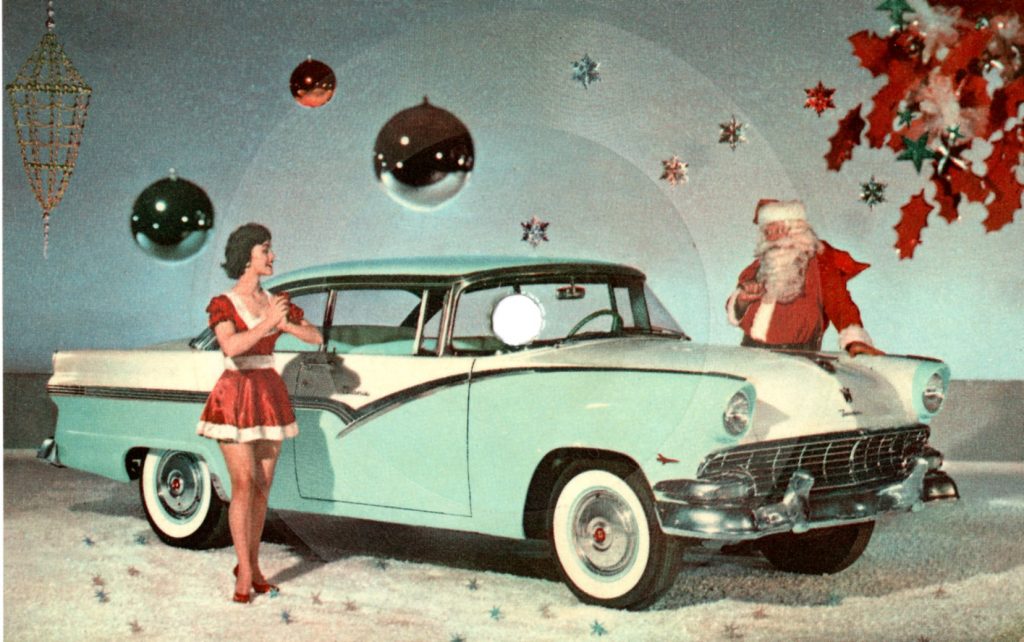 Southern Folklife Collection audio engineer, John Loy, found this amazing postcard/78 rpm disc in the Archie Green Papers (20002) just last month. Serendipity! Notice the grooves and the center hole in the middle of the windshield. We were amazed by the sound quality and the excellent condition considering folklorist Pete Tamony, Archie’s mentor, received this in the mail 60 years ago. Listen to this special message from Ford Motors as sung by the great Rosemary Clooney backed by the Mitch Miller Orchestra. May you all be well this holiday season, whether you take Rosemary Clooney’s advice or not. We wish you enjoyment and year-round satisfaction no matter what. One more post from the 2015 “Holiday in the Stacks” tomorrow so be sure to check back in with Field Trip South. FD1289_PM_LC_20002_Archie Green Papers_FD_1289_RosemaryClooney_flexi_Southern Folklife Collection_001 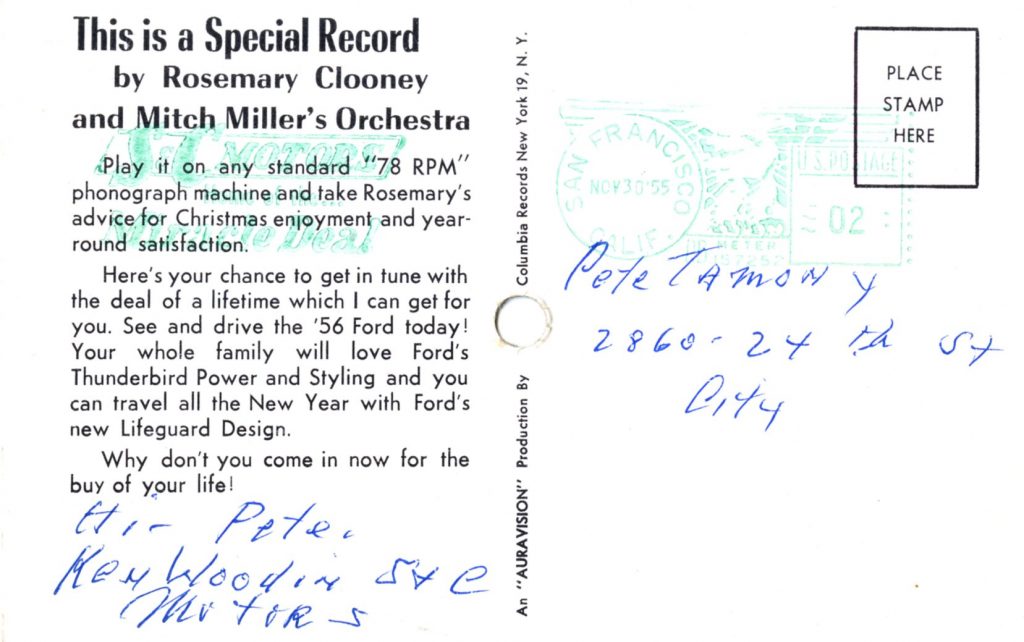