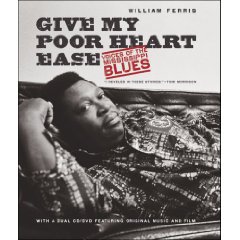 UNC Press has announced a November 2009 publication date for Give My Poor Heart Ease: Voices Of The Mississippi Blues, the new book/CD/DVD from UNC’s own Bill Ferris. From the Press:

Throughout the 1960s and 1970s, folklorist William Ferris toured his home state of Mississippi, documenting the voices of African Americans as they spoke about and performed the diverse musical traditions that form the authentic roots of the blues. Illustrated with Ferris’s photographs of the musicians and their communities and including a CD of original music and a DVD of original film, this book features more than 20 interviews relating frank, dramatic, and engaging narratives about black life and blues music in the heart of the American South.

The CD/DVD is set to include narratives and performances from Fannie Bell Chapman, Scott Dunbar, James “Son” Thomas, B.B. King and more, personally selected by Bill Ferris from his extensive field recordings housed in the SFC’s William R. Ferris Collection.
UNC Press has put together a great website where you can watch video clips, get bonus material, and preorder your copy.