I am fond of serendipity—rooted, perhaps, in the photographer part of me. Most of my personal photography comes from exploration, not from preconceptions. Serendipity is not, however, aimless wondering. You have to be “tuned in” to what may present itself. 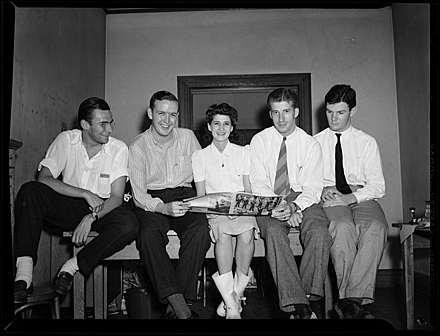 Last Friday was the first day we had students from the School of Information and Library Sciences (SILS) digital library class here to scan negatives. For the material to be scanned, Elizabeth and I selected in advance Hugh Morton’s negatives made during his years as a student at UNC. We thought as students themselves they’d have some connection to the images, and it would give us a glimpse into student life on campus in the pre- and early World War II era.
While setting up the workspace on Friday morning, I wanted to walk through the work flow in preparation for the students arrival. I picked out a negative—the image above—that looked too challenging for them to scan right off the bat because the faces and lighter clothing were overexposed. Scanning it gave me some fits, so I decided to try again later. I did, however, recognize on the cover of a Daily Tar Heel newspaper (held by a woman who may be Olive Consecu, secretarial staff member of the student publication The Carolina Magazine) a scene similar to a Hugh Morton negative that I had scanned months earlier while “rummaging” (see below). 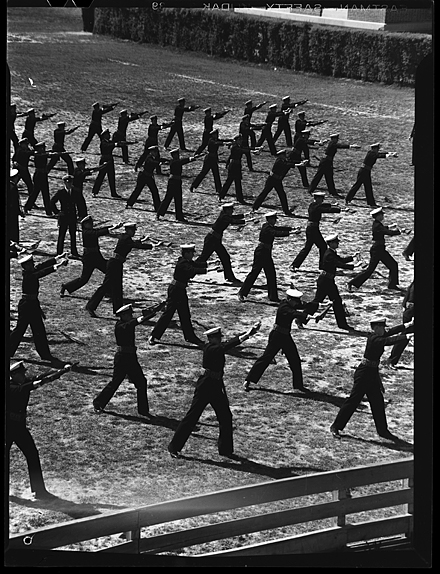 At the end of the day, I launched back into rescanning the negative. With a better scan in hand, I zoomed into the image to see if I could read the issue date, but all I could discern was that the month had a short name, presumably “May,” and that, with the exercising trainees in naval uniforms, it was likely after 7 December 1941. Then, without thought, I recognized that the picture to the left, on the back page, was another Morton negative that I had scanned during that same rummaging phase.

So off I went to the bound volumes of the DTH. At first I could not find the issue. The newsprint is very fragile, so I was carefully handling only the tops of the pages, looking for the full-bleed printed image. Every page was columnar. For each publication volume, however, there are three bound sets. One of the three bound sets was extremely fragile and detached from the spine . . . . 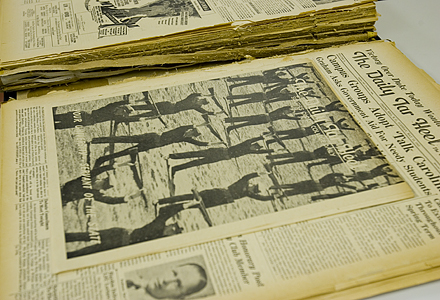 While gingerly turning pages . . . Voila! I uncovered a special edition smaller than the regular daily issues. 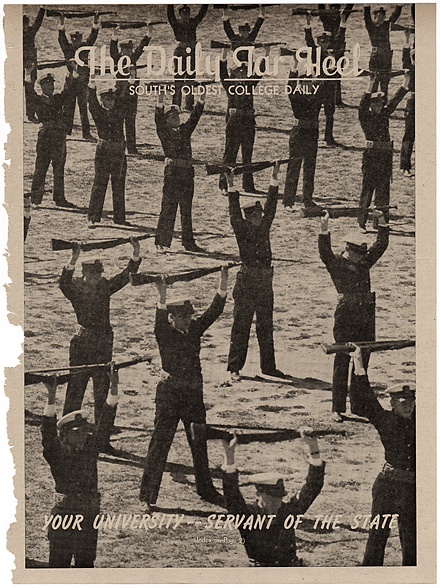 Entitled Your University—Servant of the State, the issue’s twenty pages feature UNC’s shifting roles within the war effort. As then DTH editor Orville Campbell stated, “This is your University. Those who run it for you know that you want them to do everything possible to prepare the youth of this state and nation for service. To that end they are working. We who are students feel that the story of how your University serves the state, the nation, and you needs to be told. To that end The Daily Tar Heel, the students’ newspaper, is publishing this special edition.”
The newspaper credits Hugh Morton, student photographer, for the cover photograph of “NROTC boys going though some physical arm conditioning exercises.” So while the negative above is not the same image as the photograph on the cover, both were very likely shot at the same scene. 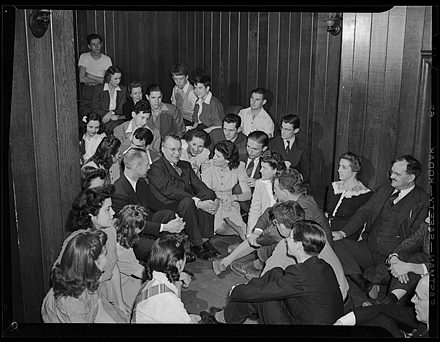 A quick examination of the negatives we set aside for the SILS project revealed more images similar to those that appeared in the DTH special edition. Yesterday’s group of students scanned a negative of Sir Gerald Campbell, then British Consul General to the United States, surrounded by eager students (see above). Again it is not the same image as the one published. 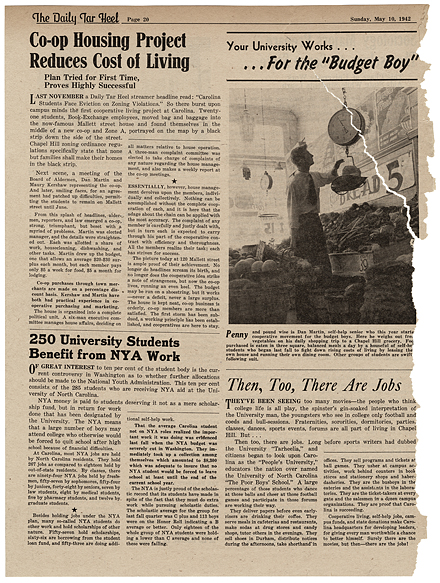 The caption for the photograph on the back page of the special edition (pictured above) begins, “Penny and pound wise is Dan Martin, self-help senior who this year started a cooperative movement for the budget boys. . . .” Martin was an instrumental player in the first cooperative living project at UNC. He was one of a group of students who moved into a house on Mallett Street in an effort to “fight down rising costs of living.” A scan from a negative with Martin in a very slightly different pose follows. 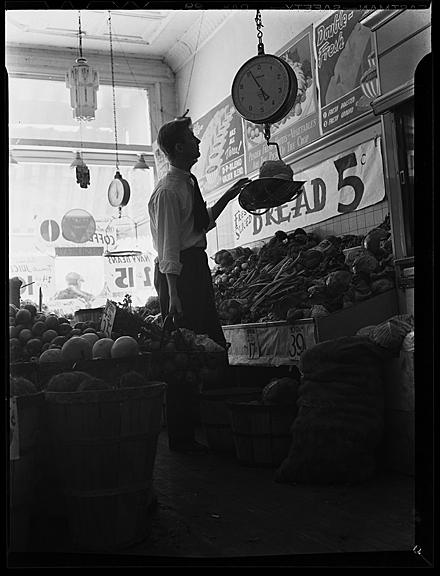 To wrap things up, let’s go back to the negative that started all this. Note the “LET’S TALK CAROLINA” button worn by the fellow on the far right (detail below).

The front page of the regular May 10th edition of the DTH features an editorial, “Talk Carolina,” by Orville Campbell that described the university, confronting dropping enrollment for the fall in the face of war, as being “on the threshold of institutional pathopsychoneurosis.” He continued, “We are the doctors, the cure-all smart boys, if you will, that can change it to an electric magic portal.” Calling upon UNC’s 3,500 students to be salesmen for the university, he proclaimed “That war means clamps for Carolina if we don’t let our friends and their friends in on what we know about it.” The following day, the DTH reported that several campus organizations had rallied behind the idea and that buttons had been ordered for sale at cost. Roland B. Parker, Dean of Men, bought the first button on May 18th.
A trove of information serendipitously discovered . . . just because a negative looked to be a bit too challenging to scan!

7 thoughts on “That's serendipity for you”