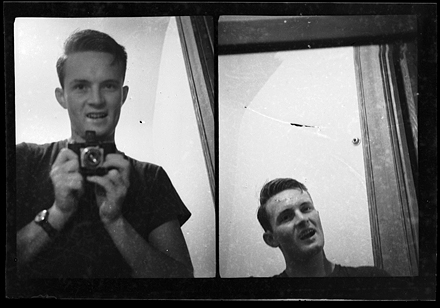 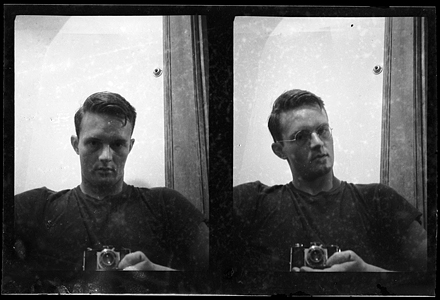 In honor of what would have been Hugh Morton’s 87th birthday today, I decided to share this set of self-portraits I recently stumbled upon—the only images in the collection I can remember seeing that are both of and by Morton. I love how they capture multiple sides of his personality—the fun, happy Hugh on top, and the Hugh on the bottom that you probably don’t want to mess with.
Dating probably from the late 1930s, these negatives are a somewhat unusual format: a non-perforated roll film with an image area measuring 1 1/4-inch by 1 1/2-inch (or 30 x 40mm). Most of the negatives of this format in the collection are deteriorating such that the film has turned blue, with blue splotches throughout.
Some quick research had led me to think that this might be film for a Kodak 35, the first 35mm camera made by Kodak. Since Morton so conveniently included his camera in the shots, we have more evidence to draw from. Unfortunately, these shots are largely out of focus, and while the camera looks pretty similar to the Kodak 35, it doesn’t look exactly like any of the models I can find online (specifically, the silver plate with squared corners behind the lens doesn’t look right). And, of course, the film size isn’t right either; the only film format I can find that meets the 30 x 40mm dimension requirement is 127. Could this be a half-frame 127 camera?
To further complicate matters, I see in David Horvath’s extremely useful Acetate Negative Survey that, “In Agfa/Ansco products, a blue anti-halation dye which was converted to a luco base during processing was used. It is generally colorless but is turned blue again by the action of mold or acids. Many degraded Agfa/Ansco negatives exhibit this distinctive blue color.” So, this leads me to wonder if this is an early Agfa/Ansco camera—but again, I can’t find any matching models online, and the film maker and the camera maker don’t have to be the same.
As usual, I’ve gotten way more wrapped up in this than I intended to. Any insight from you vintage camera buffs, or from other archivists who may have seen this format before?

6 thoughts on “Happy Birthday to Hugh”