My brother forwarded me an announcement from the Watauga Democrat that one of Grandfather Mountain’s bears, Elizabeth, had to be euthanized on Wednesday due to increasing pain from arthritis. 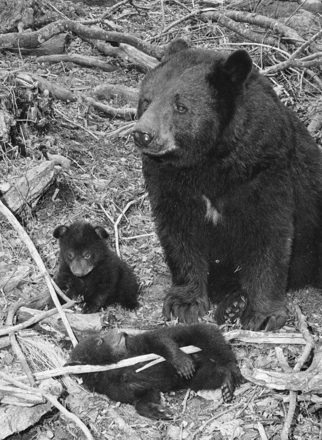 Sorting through Hugh Morton’s photos, Elizabeth the bear cub always sticks in my head, not only because of her fantastic name but also because she and her brother Walter had a fantastic story. Brought to Grandfather from Ohio as cubs, they were unexpectedly adopted and nursed by Mildred, in a year when she had no other cubs (according to Laurie Mitchell Jakobsen’s book The Animals of Grandfather Mountain). All three are shown above, on “adoption day,” April 14, 1984.
It’s perhaps a funny coincidence that Elizabeth the bear and I were both named after Queen Elizabeth I (and Walter, I suspect, after Sir Walter Raleigh). And it seems we had even more in common—in the Watauga Democrat article, habitat staff said that Elizabeth “loved to eat and was sweet and laid back.” The former part of that statement definitely applies to me (and the latter as well, I’d like to think)!

4 thoughts on “Sad news from Grandfather”