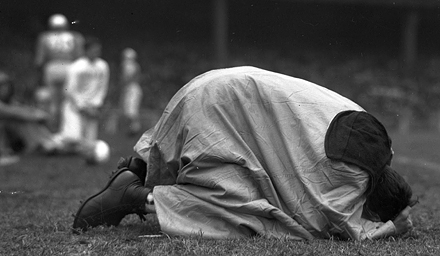 On an overcast November day in Yankee Stadium in 1949, UNC’s injured and idled All-American running back huddled to the ground and pulled his rain cape over his body.  Hugh Morton pulled out his camera and trained it on Justice—Charlie “Choo-Choo” Justice—praying undercover for the Tar Heels, who were leading Notre Dame 6-0.  It may be Morton’s most widely published photograph from that notable contest, whose final outcome was a 42-6 defeat for Carolina.
As I mentioned in my post on Friday, I just could not dampen the festive atmosphere for Saturday’s game by posting this photograph.  Justice’s prayer was shattered in New York, but the Tar Heel victory this past weekend in Chapel Hill was “just deserts.”
Today I found a few more negatives from the 1949 game and I have scanned several of those found thus far. I hope to put up a selection in the next day or two.