“Mildred the Bear, the nicest bear that has ever been…”
–Hugh Morton 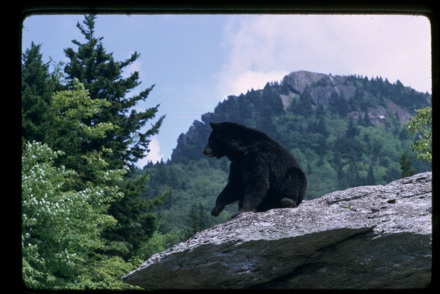 Note from Elizabeth: Allow me to introduce the author of this post, our newest Morton team member, Allison Wonsick. While not “Tar Heel born,” Allison considers herself “Tar Heel bred” as a resident of Hickory, North Carolina, a UNC-CH alumna, and a current graduate student attending Appalachian State University in Boone. She is interning this summer at Wilson Library in the Photo Archives as well as in the North Carolina Collection Gallery.

When my family and I moved to Hickory in 1996, the first place we visited was Grandfather Mountain. We hiked the trails, explored the museum, saw the animal habitats, crossed the Mile High Swinging Bridge on a blustery day, and even saw snow in April (a shock in any month for a former Floridian)–but the most memorable aspect of the trip were the bears, both as residents of the mountain and as symbols of Grandfather Mountain itself.
Particularly iconic, of course, was legendary Mildred. It was clear then and now that she was special. Working with Hugh’s slide collection and family photographs, I can see the bond between Mildred and Morton (and have heard stories of picnics together with Fig Newtons and grape soda), but always wondered how the relationship began. Just how does one become friends with a bear? 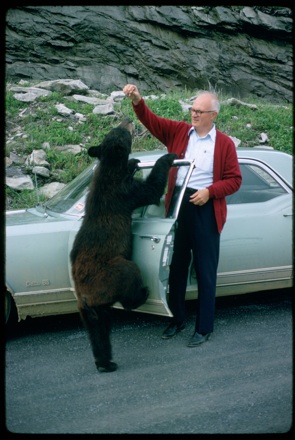 Luckily, finding out more information about Mildred was not difficult. It turns out that Morton wrote her biography a few years after her arrival on the Mountain. 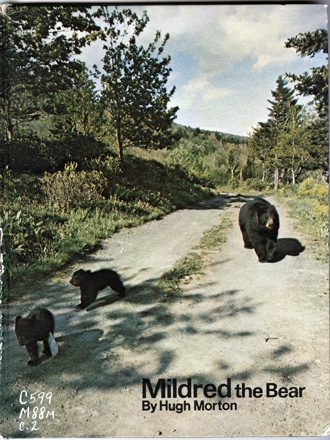 So here is a history of Mildred and the bears that followed in her paw prints, courtesy of former zookeeper Laurie Mitchell Jakobsen in her book, The Animals of Grandfather Mountain (published in 2001 by Parkway Publishers, Inc. of Boone, N.C.), and anecdotal tales I’ve picked up while working with the collection.

Mildred was brought to Grandfather with the intention of increasing the number of wild black bears in the area. In 1967, the Atlanta Zoo had a “surplus” of bears and agreed to sell two, one male and one female, to Morton for $100 each. The male bear was released first; he ran off into the woods and was never seen again.
Mildred was scheduled to be released the same day that Arthur Smith was filming his television show on Grandfather Mountain. Ralph Smith was to sing “The Preacher and the Bear” while the bear (whom he kept referring to as “Mildred,” and the name stuck) was to be released into the wild in the background. The problem? When Mildred was “released,” she didn’t go anywhere! Unbeknownst to those involved at the time, “Mildred” was actually an office pet that had been bottle-fed since birth! She was not afraid of people and hung around the camera crew for the rest of the day.
Mildred’s first days on the Mountain were adventurous, to say the least. While exploring her new environment, Mildred managed to scare golfers, get chased by dogs, look for refreshments in the snack bar, stop traffic, and “scare housewives.” As Morton said, “Mildred and her love for people created chaos.” 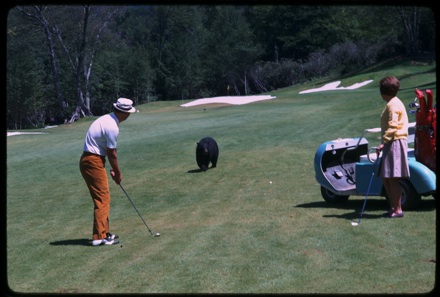 A compromise was made with the Wildlife Commission, deciding that Mildred would be permitted to roam free during the day, posing for pictures along the way, but that she needed to stay put at night. Mildred got a comfy bed of straw and leaves in a “den” made especially for her. She even got her own bath tub fed by gravity from a spring higher up on Grandfather Mountain. In 1973, an entire “bear habitat” was built. 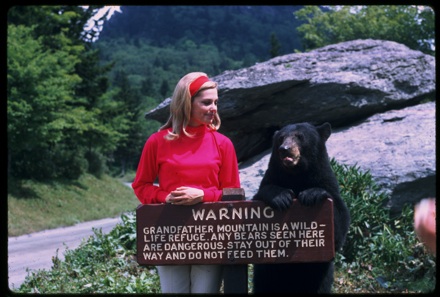 Many famous people have posed with Mildred over the years and many tourists have snapped pictures with her as well. Children have photographs petting Mildred, and she has been seen with a snow sled, eating honey, drinking out of cans, acting as Jim Morton’s golf caddy, and appearing twice a day for “Mildred the Bear shows.” (Penn Dameron, recently named Executive Director of the Grandfather Mountain Stewardship Foundation, remembers his early job as “bar tender” for Mildred, coaxing her out to the “show” with honey and soda).
But Mildred’s greatest role was that of mother. She had several cubs of her own, the first being twins Maxi and Mini, with a bear named Bimbo (he played the cub on the television series Gentle Ben). Unfortunately, their relationship was a little rocky and Bimbo relocated to Wilmington, leaving Mildred full custody of the cubs. Their birth prompted a cub-naming contest, with submissions coming in from across the state. 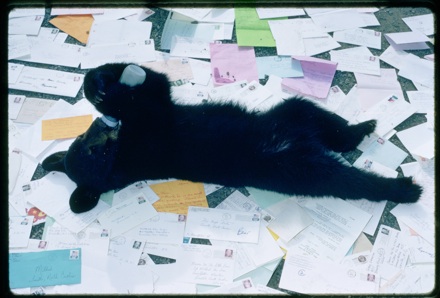 Mildred didn’t mind being a single mom and even went on to adopt additional cubs that came to Grandfather, like Punkin and Elizabeth, in the 1980s. Over the years, more bears (Gerry, Jane, Hobo, Carolina, Dakota, Mumbles, Boomer, Kodiak, Smoky, Flower, Yonahlossee, among others) were brought to or born on the mountain.
Although Mildred passed away (in 1993, at age 26), her legacy at Grandfather Mountain still lives on. The animal habitats will always be named for her, the bear that “did not know she was a bear.” She will forever be remembered for her role in environmental education and as a symbol of the High Country.
–Allison Wonsick