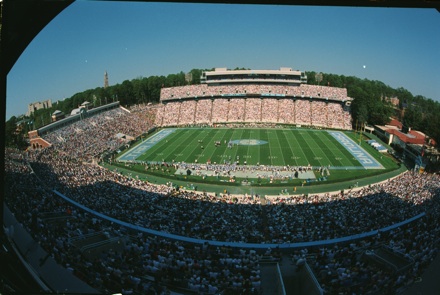 Note from Elizabeth: This post was written by volunteer Jack Hilliard as a tribute to Kenan Stadium in honor of its recent facelift. For a great related article about Hugh Morton and Charlie Justice, check out this column by Lee Pace on TarHeelBlue.com.

Need a clue?  There is a UNC-Chapel Hill connection . . . Each appeared and/or performed in Kenan Memorial Stadium, and Hugh Morton photographed them in that majestic venue.

The 1966 UNC Football Media Guide called Kenan “A Southern Showplace.” Built in 1927 for $375,000 on the outskirts of the campus, the arena now sits nearer center campus following 82 years of campus growth. Over those years, it has been the stage for July 4th fireworks displays, concerts featuring Bruce Springsteen; Blood, Sweat and Tears; Grand Funk Railroad; Joe Cocker; and Chapel Hill favorite James Taylor. In mid-May, UNC graduation ceremonies are held in the stadium with speakers like Bill Cosby, Madeleine Albright, and Desmond Tutu. 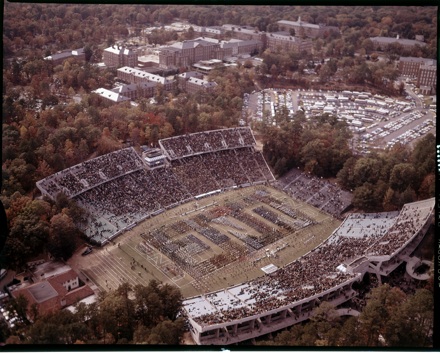 The Stadium has played host to high school marching band competitions (see above), campus beauty contests, homecoming and reunion celebrations, and two U.S. Presidents (John Kennedy in 1961, and Bill Clinton in 1993). During World War II (when the entire campus welcomed the Navy Pre-Flight School), the Stadium was the home for military graduation parades. A memorial was held in the Stadium for FDR in April, 1945 and for JFK in May, 1964. Around that same time, a popular campus rumor was that the Stadium might need to be used for Dr. Robert B. House’s Classics 31 class and Dr. J. Primrose Harland’s Archeology 85 because they were so large!

But, most people think of Kenan Stadium as a football arena. It is indeed that — the home of the North Carolina Tar Heels. 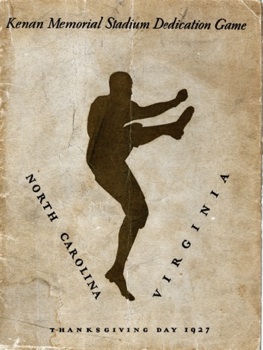 On November 12, 1927 the first event staged in Kenan was a football game between UNC and Davidson. About two weeks later, on Thanksgiving Day, the Stadium was dedicated in a ceremony before the UNC-Virginia game. John Sprunt Hill presented the Stadium on behalf of the donor William Rand Kenan, Jr., while Governor Angus W. McLean accepted on behalf of the State of North Carolina and the University. Enhancing the Stadium was a pet project of Mr. Kenan’s through the years — it was his gift that enabled portable seating to be installed, a new press box to be added in 1949, and then an upper deck in 1963 — and of course the magnificent Kenan Football Center, added in 1997. Additional enhancements are being made even as we speak.

Tar Heel football isn’t the only football that happens in Kenan. Each December the North Carolina High School Athletic Association holds division championship games in the Stadium, and on August 11, 1990, Jerry Richardson, owner and founder of the Carolina Panthers, staged what he called “Carolina Kickoff II,” which was his second effort to prove to the NFL that the Carolinas could and would support professional football. (The game that night was between the Atlanta Falcons and the Washington Redskins).
Often times when alumni gather for homecoming or reunion weekends, this question comes up: “What was the greatest game ever played in Kenan?” The answers vary: was it Carolina’s win over Tennessee in ’47, or Jim Tatum’s team beating Navy in ’57? How about UNC’s first win over Notre Dame, which came in 1960? And who could forget the great 2004 win over Miami? All those games are great candidates for the greatest, but there are probably two dozen more just as good. There is one game, however, that seems to be on everyone’s list. 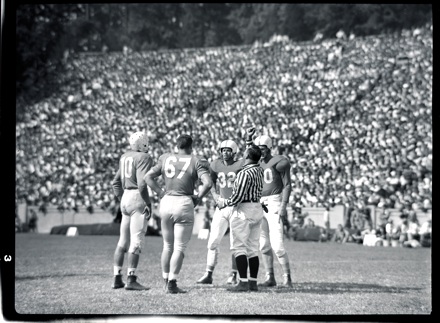 On Saturday, September 25, 1948, Carolina played Texas before a sellout crowd of 44,000 in the season opener. In a 1984 interview, Charlie “Choo Choo” Justice said that folks in 10-gallon hats showed up on Franklin Street as early as Thursday. There were no pre-season polls in those days, but both teams were certainly in the top 5. Carolina scored 21 points in the first quarter and went on to beat the Longhorns 34 to 7. The headline in the “The Alumni Review” read: “Thundering Longhorn Herd Is Struck By Lightning Before 44,000 Electrified Fans!”

Hugh Morton’s photographs from that day are legendary and have been used time and time again.  Perhaps there is a special reason why the Morton photographs from September 25th are so good. Back in Wilmington, Hugh’s wife Julia was taking care of some family business . . . Hugh Morton, Jr. was born on September 24th. 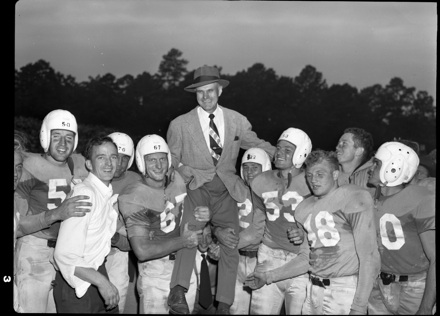 Following the big Texas win, the Tar Heels went on the road for two games, and when NC State came into Kenan on October 16th, the Tar Heels were ranked Number 1—the only time that has happened in UNC football history.