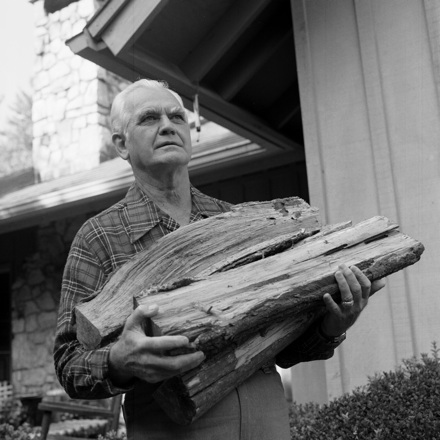 Hugh Morton cultivated many relationships in his various roles as photographer, publicist, land developer, and civic pillar. He became friends with paragons of athleticism (Michael Jordan, Ted Williams), beloved celebrities (Charles Kuralt) and, in the instance that is relevant to this blog post, people of great geopolitical significance. One of these people, General William Westmoreland, first met Morton on November 11, 1963 during a Veterans Day Celebration for the USS North Carolina.  A few months after, he was appointed by President Johnson as commander of the U.S. Military forces in Vietnam, a post that lasted until 1968.
Military Man 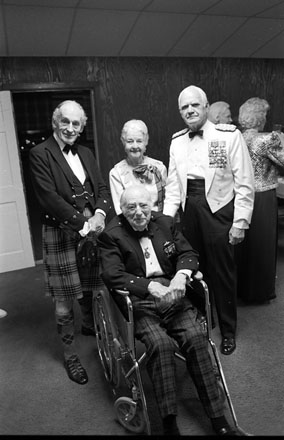 Westmoreland is known primarily as a military man, and his public image was a stern one—sharp features, piercing eyes, powerful eyebrows, and a visible discomfort in plainclothes. He is shown here looking as natural and imposing as a granite cliff in his formal military attire at the Grandfather Mountain Highland Games. Given his military demeanor, then, it must have seemed a daunting task to Hugh Morton when he was asked by Westmoreland’s Public Relations firm to take pictures of him living an entirely domestic life. Westmoreland needed PR assistance with a $120 million libel suit he filed against CBS in response to their 1982 documentary, The Uncounted Enemy: A Vietnam Deception. This documentary, narrated by journalist Mike Wallace, accused Westmoreland of manipulating military intelligence to claim there were fewer communists in South Vietnam, thereby creating the impression that the war was being won. Westmoreland was upset at this assault on his character, and mounted a lawsuit against CBS and Mike Wallace. 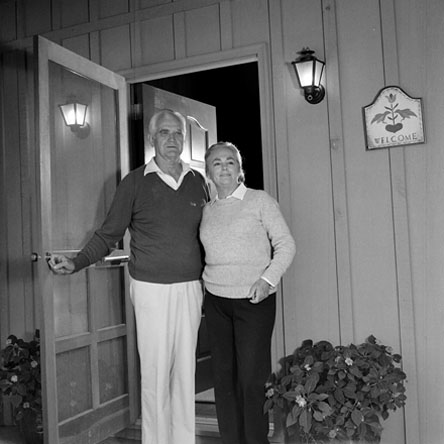 The PR team needed a photographer with whom Westmoreland was comfortable and who could help bring out his qualities as a civilian, and Hugh Morton was an ideal candidate. This image contains all the elements of home life that a PR firm could ask for: a loving couple in sweaters, an open door, and a charming welcome sign with all the iconography of comfort (birds, heart, a flower).
The hearth is traditionally the center of family life, the source of warmth, light, and heat for cooking. Westmoreland (see first photo above) fulfills his role as the feeder of the hearth as he carries a stack of neatly cut wood. According to the caption with which Morton accompanied this picture, however, “The General’s sweet wife, Kitsy, threatened to expose the General and me as ‘complete frauds,’ because, she said, ‘West never brought in a load of wood in his life.’” The important element of this photograph is that he looks natural performing this task as a nurturer and provider. 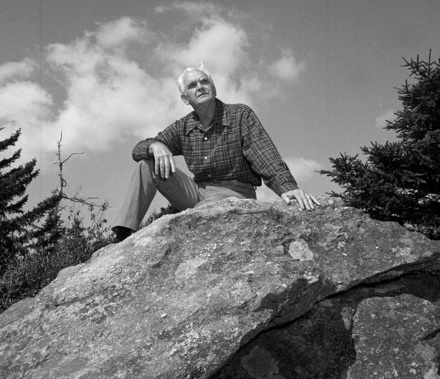 However, it also must have seemed like a good idea to portray Westmoreland as someone courageous in a personal way as opposed to as a representation of a military body. This kind of primal courage found in the heroic representations of iconic figures such as Daniel Boone and George Washington can be seen in the rugged Westmoreland ascending a rocky face, eyes looking to and possibly past, the heavens.
Was the PR campaign successful? Well, the issue was resolved in 1985, when Westmoreland suddenly dropped his lawsuit after interpreting a statement made by CBS as an apology. Many things happened as a result of this lawsuit: Mike Wallace was afflicted with depression; CBS lost their libel insurance; a legal precedent was set in some manner with first amendment rights. For the sake of the Hugh Morton Photographic Collection, however, the best thing that happened was the creation of a set of fantastic images of a historical figure represented in a manner far outside his known role.

10 thoughts on “Gen. Westmoreland: Keeper of the Hearth”