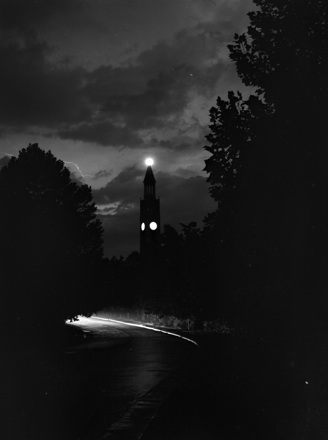 Late summer 1947 . . .”It was a dark and stormy night.”  Hugh Morton had set up his camera down the street from the Morehead-Patterson Bell Tower to photograph the University landmark during a thunderstorm. Little did he know at the time that one of the photographs from that session would wind up on the cover of two prominent North Carolina magazines simultaneously. That shot of the Tower (above), shrouded in haze with lightning flashing above, would be featured on the front cover of The Alumni Review issue of October, 1947, as well as The State magazine for October 25, 1947.

Over the years the Tower became a favorite photographic subject for Morton. His Bell Tower shots graced the cover of The State at least two more times, February 25, 1950 and January, 1974. 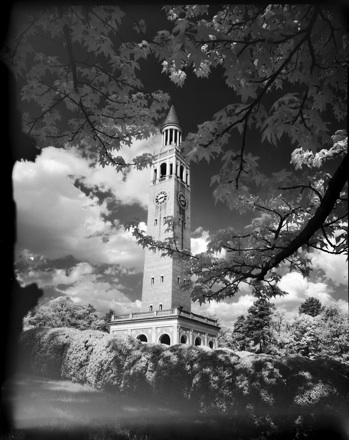 In the early 1920s John Motley Morehead III proposed the idea of a Bell Tower to UNC President Harry Woodburn Chase. As part of the post-World War I building boom on campus, South Building was remodeled and Morehead suggested putting a bell tower on top of the building. The University “powers that be” wanted to maintain the historical integrity of the old structure, so they declined the offer. Then, in 1926, the administration drew up preliminary plans for what would become Wilson Library. Again, Morehead offered to pay for a bell tower on top of the library, but University Librarian Louis Round Wilson had already decided that “his” building would be domed.

Later, when University trustees moved the flagpole from McCorkle Place to Polk Place, Morehead again suggested a bell tower, and again the administration declined his offer. At this point Morehead enlisted the help of Rufus Lenoir Patterson II, prominent New York businessman, and the two families, along with University officials, came to an agreement that the Bell Tower would be placed between Wilson Library and Kenan Stadium.
On Thanksgiving Day, November 26, 1931, Governor O. Max Gardner delivered the acceptance address, concluding with these words:

I dedicate this tower and the sweet music of these bells to the future upbuilding of this institution and this state, knowing full well that on this campus the sons of North Carolina will be inspired by the harmony of these chimes and will here catch the vision and follow the gleam.

Later that afternoon, as was the Thanksgiving tradition in those days, Carolina played Virginia in Kenan Stadium.

Originally the bells were rung manually, but now the 14-bell carillon operates electronically, and has been heard as far away as Durham.  The largest bell, which tolls the hour, is engraved with the name of Governor John Motley Morehead, grandfather of the bell’s creator.

The 172-foot Morehead-Patterson Bell Tower actually rises about 200 feet, since it is built on a knoll, and it is surrounded by a hedge and lawn designed by William C. Coker, botany professor and creator of the campus Arboretum. 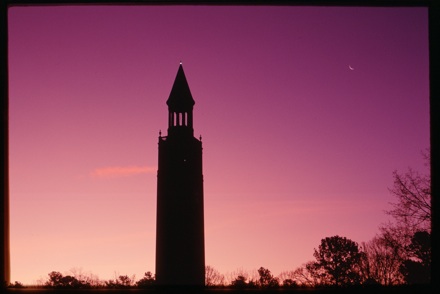 The photograph on page 94 of Morton’s 2006 book, Hugh Morton: North Carolina Photographer, shows the Morehead-Patterson Bell Tower at sunset—the way it often looks as it serenades the dispersing crowd after a great Tar Heel victory in Kenan, like the 13 to 6 win on Thanksgiving Day 1931.
—Jack Hilliard

6 thoughts on “"The sweet music of those bells…"”