Some fans of “CBS News Sunday Morning” may not know that the television program began airing regularly on January 28th, 1979—thirty-three years ago this weekend—originally hosted by North Carolinian Charles Kuralt.  Jack Hilliard present a profile of Kuralt and his long-time friendship with Hugh Morton.

It wasn’t unusual for Hugh Morton to get a call from a CBS News producer wanting to set up an interview with North Carolina Governor Luther Hodges during the Democratic National Convention in July, 1960.  After all, Morton was the governor’s campaign publicity manager and Governor Hodges was leading the North Carolina delegation at the convention.  When Morton and Hodges arrived at the Los Angeles Sports Arena, they met the youngest correspondent that CBS News had.  Twenty-six-year-old Charles Kuralt would be doing the interview. 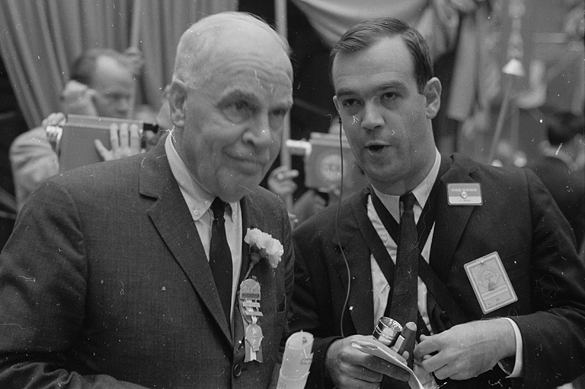 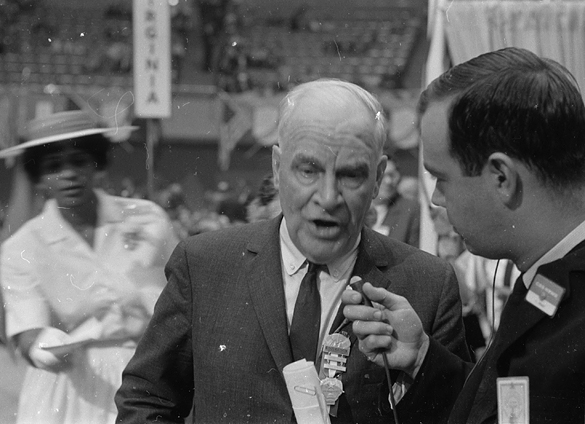 While Kuralt conducted the interview, Morton did what he liked to do—he took pictures.  Hugh was impressed with Kuralt’s questions and his ability to handle himself during the interview.  After the questions were all answered, Morton and Kuralt struck up their own conversation, and discovered that not only were they fellow Tar Heels from UNC, but were both born in Wilmington.  Morton likely didn’t realize it at the time, but he and Kuralt would become close friends for the next 37 years.
Charles Bishop Kuralt had been with CBS News only three years when he was assigned to a 250-person staff of correspondents, news producers, reporters, directors and technicians for the 1960 conventions and election.  In those days, the three major networks, ABC, CBS, and NBC, each covered the national conventions and each competed for its share of the TV and radio audiences. CBS with anchorman Walter Cronkite, and NBC with anchors Chet Huntley and David Brinkley were fierce competitors.
Following the 1960 elections, in the spring of 1961, CBS assigned Kuralt to a Friday evening, prime time program called Eyewitness to History, an in-depth look at the top story of the week.  One of his first programs was broadcast on Friday, May 5, 1961—the day America put its first man in space with Alan Shepard’s sub-orbital ride from Cape Canaveral, Florida.  “Eyewitness” proved to be a popular program, and Kuralt called it “the best job I’ve ever had,” but a management change at CBS sent Kuralt to Latin America as a one-man bureau—not exactly what he had dreamed of doing.  From there, Kuralt completed four tours in Vietnam and then it was back to the United States and the West Coast bureau.  During these career changes, Kuralt and Morton stayed in touch and when he could get away, Kuralt would visit Grandfather Mountain, a place he dearly loved. 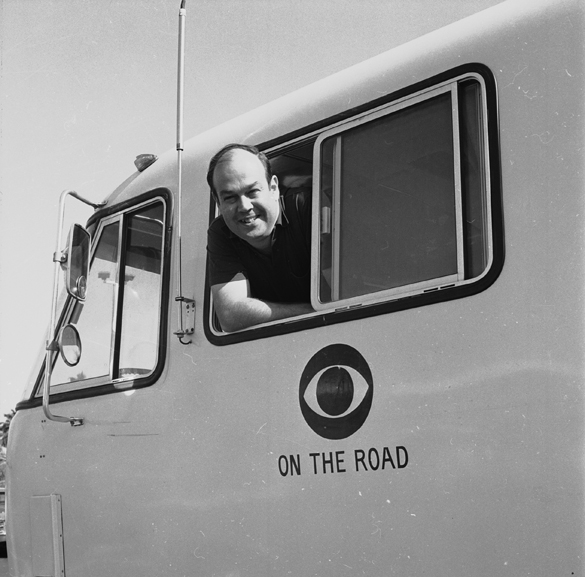 Then, in 1967, Kuralt floated an idea to CBS News President Dick Salant about an “On the Road” series.  Salant was willing to try it.  So in October of 1967, Kuralt hit the road and as they say “the rest is history.”  From Loafers’ Glory, North Carolina to Albertville, France and the ’92 Winter Olympics, Charles Kuralt picked up thirteen Emmy and three Peabody awards, was often compared to Edward R. Murrow, and was called by Time magazine “laureate of the common man.”  In addition he returned each weekend to New York to anchor “CBS Sunday Morning.”  Oh yes, he wrote six books also.

Kuralt continued to return to North Carolina when he could—sometimes to write and sometimes to just relax . . . and sometimes for special occasions.  On September 2, 1992, he accepted Hugh Morton’s invitation to speak at the 40th anniversary of the Mile High Swinging Bridge.  He had fun with his old friend.  ” . . . the Mile High swinging bridge, which is NOT a mile high, is not swinging either.  So, what we have here is the 80-foot-high, Tethered Bridge.  Big Deal.”
On May 21, 1993, Kuralt returned to Chapel Hill for a reception and banquet honoring him on the occasion of his acceptance of the North Caroliniana Society Award.  That Friday night at the Carolina Inn, Kuralt’s younger brother Wallace delivered the keynote speech.  It was titled, “The Uncommon Laureate:  Sketches in the Life of Charles Kuralt.”  During his talk he recounted,

“Early on Charles exhibited a penchant for journalism and broadcasting . . . he would sit in the front yard and announce: They’re up to the line, and here’s the play.  It’s Justice to Weiner, Justice to Weiner . . . down the sideline . . . TOUCHDOWN!”

“What is it that binds us to this place as to no other?  It is not the well or the bell or the stone walls or the crisp October nights. . . . No our love for this place is based upon the fact that it is as it was meant to be, The University of the People.”

Editor’s note: last week, the Daily Tar Heel ran an article accompanied by a photograph of students protesting proposed tuition increases.  One of the protesters carried a sign bearing words from that very quotation, even crediting Kuralt on the placard.

Farewell, my friends.  Farewell and hail.
I’m off to seek the Holy Grail.
I cannot tell you why.
Remember, please, when I am gone
‘Twas aspiration led me on.
Tiddly-widdly-toodle-oo.
All I want is to stay with you.
But, here I go.  Goodbye.

Kuralt then spent much of his time researching and writing his final book, Charles Kuralt’s America.
On December 8, 1995, he spoke at Hugh and Julia Morton’s 50th wedding anniversary”:

We should thank them (Hugh & Julia) for bringing us (Duke and Carolina) together.  There aren’t many things that bring us together, but Julia and Hugh can do it.

And on June 6, 1996, he paid tribute to his friend of thirty-six years as Hugh Morton accepted the 1996 North Caroliniana Society Award for his service to North Carolina:

When Hugh Morton visited with Kuralt in June of 1997 at Belmont Abbey College, he was appalled at Kuralt’s weakened condition.  He had been diagnosed with Lupus and the treatment had taken a severe toll.  Morton begged him to come up to Grandfather and recover, but Kuralt said he had too much to do.  Morton wasn’t surprised when the phone call from Kuralt’s assistant Karen Beckers came on July 4th telling him that “Charles is gone.”  Charles Kuralt was only sixty-two years-old.
Following his death, the University of North Carolina commissioned a series of oral histories with Charles Kuralt’s friends.  His dear friend Hugh Morton said this:

Charles really had the common touch.  He was so genuine and sincere.  I really believe he was the most loved, respected and trusted news personality in television.

7 thoughts on “The Uncommon Laureate with the Common Touch”