Today, August 16th, UNC’s great All America end Art Weiner celebrates his 86th birthday.  Weiner and teammate Charlie Justice were UNC’s “Touchdown Twins” of the late 1940s.  Justice, the tailback in Coach Carl Snavely’s famous single wing formation got most of the headlines.  Weiner would have received just as many accolades—maybe more—had he been on any other team without Justice.  Hugh Morton collection volunteer Jack Hilliard takes a look back at the Weiner-Justice connection during the golden era of Carolina football.


He was the perfect fit.  Art Weiner, with his wit and sense of humor, was the perfect “Roaster” for a series of Charlie Justice charity roasts during the early 1980s—one in Greensboro for multiple sclerosis, one in Asheville for the Western Carolina Children’s Foundation, and one in Charlotte for juvenile diabetes.  Weiner had tales to tell on his longtime friend and teammate.  A favorite story went something like this:

My mother-in-law never understood all of the hype about Charlie Choo Choo Justice.  She said, “If he’s as good as all the newspaper headlines say he is, why doesn’t he just go out on the field by himself and win the game, and all of you guys can just stand and watch?”
Well, at the 1949 Carolina–Duke game over in Durham I had a great day.  I caught two touchdown passes, and blocked the Duke field goal attempt in the final seconds to save the game.  So, when I got home that night I called my mother-in-law and said, “Be sure and check tomorrow’s paper . . . see who makes the headlines this time.”

Next morning, Weiner rushed out to get the morning paper off the front porch.  He ran inside and opened it up to the sports section and there it was, the headline from Saturday’s game: “Justice Scores One, Passes For Two, Leads Tar Heels Over Duke.”

In the fall of 1946, Art Weiner and Charlie Justice, through one of those quirks of fate that often happens in the world of sports, found themselves together on the practice field in Chapel Hill.  Both had played service football during World War II—Weiner in the Marines and Justice in the Navy.  Both had played in Hawaii.  Immediately they became friends, on and off the playing field.  It was on the field where they made headlines.


The first game of the golden era of Carolina football came against Virginia Tech (called VPI in those days) on September 28, 1946.  On the second UNC series of that game, Weiner caught a 9-yard touchdown pass from Bill Maceyko.  It was Weiner’s first college play.  He went on to score three more times in ’46 despite several injuries.  In 1947 Weiner caught 19 passes for 396 yards, but it was 1948 when he was selected to Grantland Rice’s All America team.
When UNC alums, fans, and friends get together, they often look back at great Carolina wins.  Two games from 1948 almost always come up: the Texas game and the Duke game.  When Texas came to town on September 25th, Weiner had a touchdown on Carolina’s third play from scrimmage, and the Heels went on to win 34 to 7.  In the Duke game, 44,500 fans—in perfect Kenan Stadium weather—saw Weiner catch two touchdown passes: one for 13 yards from Justice, and another for 26 yards from fullback Hosea Rodgers.  It was Justice’s 43-yard touchdown run in the third quarter, however, that made all the headlines.
In addition to the Duke game that he described at the Justice roast, the 1949 season saw Weiner play a great game against NC State and have a fantastic day against the University of Georgia in Chapel Hill catching six passes—two for touchdowns.  He was selected lineman of the week by the Associated Press.  Head Coach Wally Butts, the Hall of Fame Bulldog main man, in an interview following Carolina’s win, said, “Art Weiner is the greatest pass catching end I’ve ever seen.”

Justice talked at length about his friend and teammate in the locker room following the ’49 Georgia game.  “Boy, that Art was terrific today.  Did you see him fake that safety man on the first touchdown?  I almost had to laugh when I threw the ball.  And that last (winning) touchdown?  Why, that was a run which would ordinarily take both a halfback and a fullback to make.  The guy’s terrific.”

Orville Campbell, writing in The Carolina Gridiron magazine, compared Weiner to another great Carolina end, Andy Bershak.  Against NC State, Weiner had seven catches which prompted State Head Coach Beattie Feathers to conclude,  “I’m thankful that I’ll never have to set up another defense to try and stop Weiner and Justice.  They’re uncanny.”

When the 1949 season ended, Weiner had 52 catches to lead the nation in receptions.  He was again selected to All America teams and was a unanimous choice for the first annual Senior Bowl game played in Jacksonville’s Gator Bowl on January 7, 1950, where he caught eight passes for 139 yards and was lineman of the game. 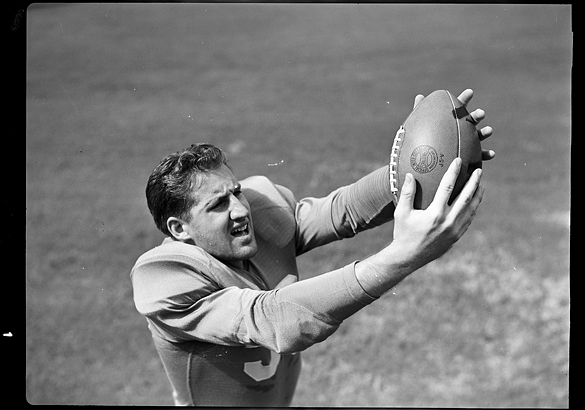 It was not surprising when Weiner was the first round NFL draft pick on January 20, 1950 of the New York Yankees.  (Yes, there was a New York Yankees pro football team in 1950.)  During the ’50 season, he caught 35 passes for 722 yards and 6 touchdowns.  His pro career, however, was cut short by a knee injury.  He coached briefly at Kings Mountain High School, and then joined Burlington Industries as a vice president for manufacturing services where he remained for 23 years.
Although they went their separate ways following their time at UNC, Weiner and Justice remained steadfast friends through the years.  The 1946-49 era UNC players held reunions from time to time, and Weiner and Justice were always there leading the cheers.  There were celebrity golf tournaments . . . there was even a UNC football alumni basketball team called the Carolina Clowns.
When the North Carolina Sports Hall of Fame inducted Weiner in 1974, Justice was at the ceremony cheering for his friend.  In June 1981 Art Weiner Travel, Inc. of Greensboro established a branch office in Greenville that was jointly owned by Charlie Justice.  In December 1992 when the National Football Foundation College Football Hall of Fame inducted Art Weiner, Charlie Justice was there in Art’s shadow.  Charlie Justice and Art Weiner made their final appearance together on the field at Kenan Stadium on November 16, 2001 at the Justice Era Reunion.  It would be Charlie’s final visit to Chapel Hill.

The young man did a good job.  There are dozens of Justice (and Weiner) action shots—not all of which are online—in the Hugh Morton collection at Wilson Library on the UNC campus.
Here’s a postscript for UNC trivia fans: What year did Charlie Justice complete his final pass to Art Weiner on the field at Kenan Stadium?

17 thoughts on “In the shadow of Justice”