During the month of May, we uploaded quite a few new towns to the North Carolina Postcards digital collection.  Be sure to check them out below:

We also recently uploaded a unique postcard of Raleigh.  The card below, Seeing Raleigh, was published in 1907, and shows a tour bus on front, with a space for a message and another image inside.  The inside of the card shows an automobile’s grill that features a fold-out strip of miniature postcards of various Raleigh sights! 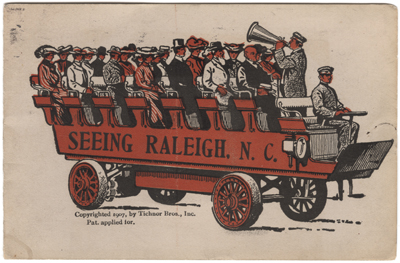 “If [George Washington Hill, president of American Tobacco, 1925-1946]  did not invent the hard sell, he nonetheless drove it to new heights. Selling Lucky Strikes became his obsession. Packages dangled on strings in the windows of his Rolls Royce, which had the Lucky Strike logo emblazoned on its taillights. Hill named his pet dachshunds Lucky and Strike and grew tobacco in the garden of his Hudson River estate.

“Even Albert Lasker, his adman, found Hill’s excesses notable: ‘The only purpose in life to him was to wake up, to eat and to sleep so  that he’d have the strength to sell more Lucky Strikes.’ ”

— From “The Cigarette Century: The Rise, Fall and Deadly Persistence of the Product that Defined America” (2007) by Allan M. Brandt