“The Supreme Court… decision in the Dred Scott case…  is the most important decision ever made by any Court in this country…. It fortifies as by a wall of brass the rights of the slaveholder in the States and in the common territories.

“The idea of the abolitionists, that a slave is free as soon as he touches the soil of a free State, is again exploded; for it is declared that he remains a slave, though sojourning in a free State, and the right of his owner to his body and to his services cannot be affected.”

In ancient days they sought to build a high tower reaching to the skies, that should successfully withstand all storm and flood. The twentieth century steamship is the modern equivalent of the Tower of Babel. For, in her strength and mechanical skill, she defies the elements, and within her hospitable area promises to seafaring folk immunity from the perils of the deep. Need we wonder, then, that the corporation, overconfident in its provisions against wind and wave, should make speed even when warning of danger had gone before? Let us grant this vessel, gone to her doom, was not built to be a miracle of speed; that on her maiden voyage she was not seeking to make a record. Yet the contagion of speed was upon her, for she was almost at her speed limit in a dangerous region, of which her officers had been warned. How far the steamship company was responsible for such reckless seamanship we may not know. The sins of a corporation, however, are not solitary sins; and it is a superficial thing to denounce the corporation and forget that it is but a part of the social organism–a large and vigorous part, ’tis true, but only a part.

-From A Tragedy of Speed: Sermon on the Wreck of the Titanic by Rev. William D. Moss

Like other preachers around the country, Reverend William D. Moss took the Titanic disaster as the subject of his sermon on April 21, 1912. Moss shared his message from the pulpit of Washington Heights Presbyterian Church in Washington, D.C., where he served as pastor. But, in the months following his sermon, he would return to Chapel Hill and the congregation whom he had served from 1904-1908.

“Parson Moss,” as he was known to his Chapel Hill congregants, was a native of Ontario, Canada. He was educated at McGill University in Montreal and ministered to several congregations in Canada before heading south, reportedly seeking improved health. 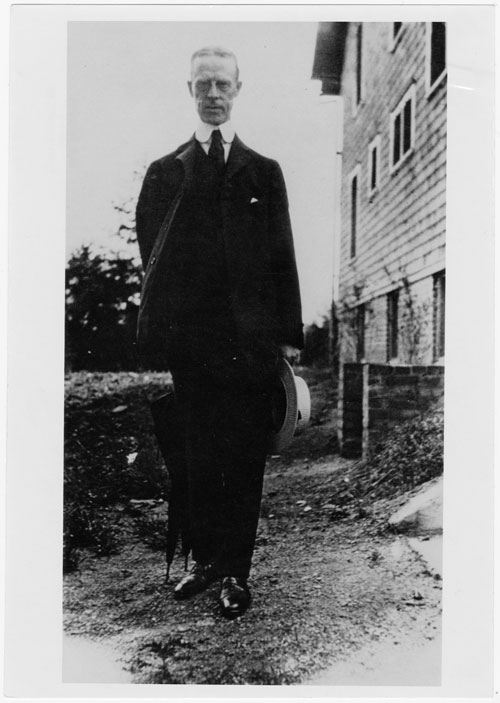 Moss’s second sojourn in Chapel Hill lasted for 20 years. Upon his death from a heart attack at age 66 in October 1932, the minister was remembered by The News and Observer for “his custom, not to wait for students to call on him, but to visit them in their dormitories and fraternity houses. The boys always felt free to confide in him and to discuss with him their most intimate problems.” The N&O‘s tribute is borne out by the words of one UNC student. Albert Coates, a 1918 graduate of the University and, later, the founder of the Institute of Government, wrote of Moss: “He would talk over our problems and perplexities with us by the hour and help us get the tangles out of our thinking.” In 1928 Moss would serve as the officiant at the wedding of Coates and Gladys Hall.

The News and Observer reported that Moss’s sermons “were of the liberal type that stressed the values of truth, goodness and beauty.” According to the newspaper, Moss’s ministry motivated James Sprunt, a Wilmington cotton exporter, philanthropist and loyal Presbyterian, to underwrite construction of Chapel Hill’s Presbyterian church.

Another of Moss’s admirers was Dean (later Chancellor) Robert B. House, who described Moss as an artist. “He was an artist in paying attention to the very person he happened to be talking to on the very thing they happened to be talking about,” House told The News & Observer in 1940. “He never seemed to be wanting to have done with a person, a time or a thing, as though to get on to something more important.” House was among a group of several UNC professors and administrators who, in 1940, assembled Moss’s sermons into a volume for publication by the UNC Press.