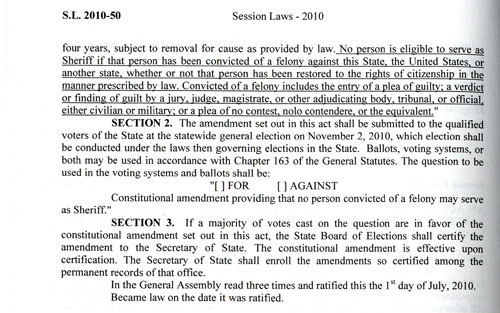 In fall 2010 North Carolina voters ratified a Constitutional amendment forbidding a convicted felon from serving as sheriff. The push for a change to the Constitution was sparked by six felons’ runs for sheriff in spring of 2010. The most notable campaign was that of former Davidson County sheriff Gerald Hege. He was removed from office in 2004 after pleading guilty to obstruction of justice. Hege was unsuccessful in his bid to regain office (so, too, were the other five convicted felons). But the felons’ runs for sheriff troubled many North Carolinians, including members of the N.C. Sheriffs Association. That organization said that even a felon’s campaign for sheriff tarnished the integrity of the office. Interestingly, prior to approval of this amendment, felons could not be police officers or deputies, but they could be sheriff.

The 2010 vote marked the 43rd proposed amendment put before North Carolina voters since 1968, when legislators and a special commission began working on a revision to the 1868 Constitution (the revised document is referred to as the Constitution of 1971). Thirty-five of those proposed amendments were ratified by North Carolina voters. John L. Sanders, former director of the Institute of Government (now School of Government) at UNC-Chapel Hill, has written a detailed account of North Carolina’s Constitutional history. It’s available for download from the N.C. Secretary of State’s website (see the document titled “N.C. Constitution”). We’ll share more about the state’s Constitutions (there have been three) and some of the changes made to the documents in coming weeks.